Greenlight > Games > Darkain Arts's Workshop
Greenlight is being retired. For more information on how to submit games to steam, refer to this blog post.
This item has been removed from the community because it violates Steam Community & Content Guidelines. It is only visible to you. If you believe your item has been removed by mistake, please contact Steam Support.
This item is incompatible with Greenlight. Please see the instructions page for reasons why this item might not work within Greenlight.
Current visibility: Hidden
This item will only be visible to you, admins, and anyone marked as a creator.
Current visibility: Friends-only
This item will only be visible in searches to you, your friends, and admins.
Soulless Wonder
Description Discussions0 Announcements4 Comments34 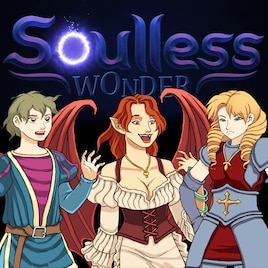 It's been quite a bit since I've posted anything here, but things have been going well over the last weeks. I met up with my mentor Ben Dunn, who first got me into animation and game design. He had a lot of good advice for me and I think we have many options to go forward with in regards to Soulless Wonder.

First off, unless another option becomes available I believe I will be taking over as the lead artist on the project. It is one of the biggest complaints I've heard and the main reason a lot of my fans drifted away from the game. I do understand how everyone feels though. We were caught up in the glitz and glamour of having a Dark Horse / Marvel artist attached to the project. I didn't realize that fans would rather have my art style that many of you had fallen in love with.

Overall I don't know what will change in regards to Soulless Wonder but at the very least I may begin releasing it in chapters. That's just one option going forward but with Steam Greenlight now shut down it's an option we have if we are accepted over the course of the next week.

I love the concept of Soulless Wonder and I'd love to have the chance to expand it further for release on Steam. It's been fantastic getting feedback from many of you and it's helped to shape the game we've been working on.

So this game is not dead, dispite the Kickstarter falling through. It means we need to restructure, but that isn't a big deal. I've completed entire half hour animations on my own before. Perhaps this is the best thing for Soulless Wonder. A way to shake things up and hopefully get us approved to launch on Steam.

I'm eager to move on with the project. It needs some changes but the entire experience of being on Greenlight and Kickstarter has taught us what needs to be done. So here's to wishing us luck as we move forward and wait patiently this week to see if we'll be approved. We have the game engine, the voice talent, and I'm willing to take on the art production as well. Lets see if we can get approved to launch on Steam!

Hey folks! We adore your fan feedback and listen to all of you. Over the course of our campaign we have heard quite a few requests to include a female version of Lantz. Because of that we've changed our first stretch goal to accomodate the budget to add her into the game.

We have other news in our first update including more detailed coloring by Rod in an airbrushed style like his "Adventure Finders" comic! Many of you have noted this is a more appropriate style for a visual novel and we're happy to accomodate.

Read More
Description
Soulless Wonder is a unique monster girl dating game that featuring the talented illustrations of an artist who has worked for both Marvel and Dark Horse comics. Playing as the cursed bard Lantz you'll try to romance eight different characters ranging from a fox girl, zombie, slime girl, goblin, succubus, and even an eldritch horror inspired by the works of H. P. Lovecraft. The play style is different than many visual novels in that we give the player more options, sort of like a Telltale Games title. Throughout your interactions with each of the girls you will also be trying to win their love to regain a part of Lantz's shattered soul. We encourage players to continue along, dispite their outcome with each of the girls. But that's not all!

Our game also explores various serious topics throughout your adventure. Mental health, grief and loss, bullying, domestic violence, and transgender issues are just some of the subjects the characters deal with in our journey. These are meaningful topics that allow us to give the characters more background and depth. It was important to us to create something different. Soulless Wonder has a cast of complex characters that can fall in love with Lantz, become his friend, or really learn to dispise him depending on how you play.

At times across the chapters of our game, you'll be given a break from usual gameplay. One episode focuses on exploring a mansion and going through notes, journals and letters left behind by the previous residents. Another focuses on joining a warband as they venture into an untamed desert to aid in fighting their enemies! All the while you'll be trying to convince each of the girls you first meet in each region to fall in love with you.

Will Lantz be able to break the curse? What will happen if the girls learn of one another? The poor fox girl recently had her entire tribe decimated by the forces of the human kingdom! How will she react if she comes across Lantz's song book containing ballads celebrating the slaughter of her people? Soulless Wonder lets you explore all of this drama and more, giving you the freedom to decide how Lantz reacts.

The game is intended to be fully voice acted by a cast of talented people. We are also very proud to have Joel Steudler as our composer for the games amazing soundtrack. Along with artist Rod Espinosa who is known for The Courageous Princess, an Eisener and Ignatz award nominated fantasy comic, you know the world of Soulless Wonder is in good hands. Animation and comic book writer Les Major will be weaving the story together. We have already created an introduction segment to our game to prove we can produce this title.

Thanks for your time and we hope you'll help us bring Soulless Wonder to life!
< >
34 Comments

Darkain Arts  [author] Apr 5, 2017 @ 2:48pm
Close enough ren, instead of drinking blood she consumes her victims souls. Thanks very much for your support!