Greenlight > Games > obscurasoft's Workshop
Greenlight is being retired. For more information on how to submit games to steam, refer to this blog post.
This item has been removed from the community because it violates Steam Community & Content Guidelines. It is only visible to you. If you believe your item has been removed by mistake, please contact Steam Support.
This item is incompatible with Greenlight. Please see the instructions page for reasons why this item might not work within Greenlight.
Current visibility: Hidden
This item will only be visible to you, admins, and anyone marked as a creator.
Current visibility: Friends-only
This item will only be visible in searches to you, your friends, and admins.
Coming Out on Top
Description Discussions2 Comments247 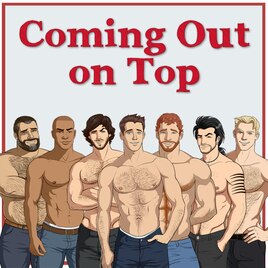 obscurasoft
Offline
See all 10 collections (some may be hidden)

View Coming Out on Top in the store

Store page
Description
Release date: Fall 2017
"It’s funny, it’s witty, it’s explicit, and it embraces all kinds of sexual relationships—casual, long-term, friends with benefits… Plus the guys are really, really hot. And there’s a goldfish called Slurpy. And there’s an option in the menu to toggle beards. Essentially, it’s the best game ever.” - Eurogamer

Coming Out on Top is a choose-your-own-fate game which places you in the role of college senior, Mark Matthews. You're about to come out of the closet and are ready to make up for lost time. With the help of your loyal roommates, play through six hilarious routes and ten unforgettable dates. 18 hot guys are waiting for you to win them over.


The game (and demo) is currently available in its unabashed, original form at {LINK REMOVED}https://www.obscurasoft.com.

abused dog Jul 11, 2017 @ 12:42pm
Greenlight is being retired. For more information on how to submit games to steam, refer to this blog post.

obscurasoft  [author] Jul 9, 2017 @ 5:19pm
Hey there, I'm still finding out about Steam keys!
In terms of why it isn't on Steam yet, we're having the artist work on some bonus art before we release it. It will be out this fall.

DarkZephyr Jun 20, 2017 @ 11:27am
Obscurasoft, will there be a patch to remove the censorship on our own steam copies of the game made available elswhere as other game devs are doing? I want the bonus art work but I also want the non-censored version of the game (I purchased the non-steam copy a couple years ago and LOVE it).
< >

Coming Out on Top has been Greenlit and is now listed in the Steam store. For the latest information, purchase options, and discussions for Coming Out on Top, please see it on the Steam Store or in the Steam Community.
Visit Store Page
For more details Visit Community Hub
For latest discussions
If you really, really want to, you can continue to the Greenlight page. Information on this page may be out of date, since all the action has moved to the areas noted above.