Greenlight > Games > Jonas Kyratzes's Workshop
Greenlight is being retired. For more information on how to submit games to steam, refer to this blog post.
This item has been removed from the community because it violates Steam Community & Content Guidelines. It is only visible to you. If you believe your item has been removed by mistake, please contact Steam Support.
This item is incompatible with Greenlight. Please see the instructions page for reasons why this item might not work within Greenlight.
Current visibility: Hidden
This item will only be visible to you, admins, and anyone marked as a creator.
Current visibility: Friends-only
This item will only be visible in searches to you, your friends, and admins.
Omegaland
Description Discussions1 Comments42 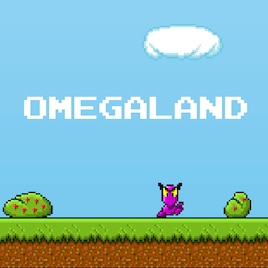 Jonas Kyratzes
Offline
See the collection (may be hidden)

View Omegaland in the store

Store page
Description
Release date: When it's greenlit!
Omegaland is a cute, simple platformer inspired by the classics.

Princess Omega has lost the five magical keys that open her castle - only you can help her! Explore the Flower Kingdom, from the icy island of Eisland to the hot desert of Sandkuchen Island, meet colourful creatures... and jump on their heads. Collect coins, purchase upgrades, and discover secret treasures on your heroic quest!

Gameplay
The gameplay consists of classic platforming, but is more relaxed than other games in its genre. Exploration is encouraged, and the levels are full of secrets. There is no timer forcing you to move quickly, and you don't always have to move forward.

You explore the world using the map, so you can play the levels in a large variety of orders. Not all levels have to be played, but all of them contain stuff to find. There are also safe areas like the village of Happy Hill Homes, the Caravanserai in the desert, and the crazy hermit's shopping mall in Hermit Hollow. There you can talk to the locals and purchase upgrades like Extra Hearts or Double Jump Boots.

Designer's Comments
I've been working on this game on and off in the background for several years now. I wanted to make something much heavier on gameplay after mostly making narrative-heavy games for a long time. I missed the days of making Flash games like Alphaland[www.newgrounds.com]; there was a kind of freedom to that, almost a kind of innocence. The only point was to make something engaging and interesting... with a few clever tricks up its sleeve.

This game is way too big to fit on Newgrounds or Kongregate, but it does share something of the spirit of those games. It's certainly got a big dose of nostalgia, but it's not *just* nostalgia. It does its own thing, in its own simple way.

To keep it accessible, it won't cost much. I want this to be the kind of small, unassuming game you pick up at a whim and end up having more fun with than you expected.

Note
The game is 100% complete and currently undergoing some testing and balancing.
Popular Discussions View All (1)

Jenenny Mar 5, 2017 @ 1:17pm
I love your work and I'm so excited at the possibility of seeing more of it on Steam!
I just completed The Sea Will Claim Everything which is now one of my favourite games ever, and have recently discovered the other games on your website. I'd recommend everyone who doubts this game to check out some of those existing games and I think you'll see why I'm so confident about this one!

Demigiant Feb 28, 2017 @ 2:22pm
I never liked Mario, but I'm sure I'll like this. This feels like when Alan Moore decided to write silly super heroes and made them awesome.

Jewthulhu Feb 26, 2017 @ 1:37am
I'm stoked. I mean, I still recommend Alphaland to people. If you sell them as a bundle, you could market it as "Godland". Clearly there are other problems with that proposal, but I stand by it.

Jonas Kyratzes  [author] Feb 25, 2017 @ 10:28pm
You know what? Maybe it's worth removing Patrick's hat (it makes him look a lot more like Mario than Patricia does) and removing the "Super" from the game's title. I mean, the title was picked for a reason, and personally I like it a great deal, but if it bothers people this much, it might be worth changing. I'll also add a couple more screenshots and expand the description, to maybe give a better feel of what the game is like.

It's still going to be a game that looks the way it does - because it has to, that was the idea - but at least a few of the superficial problems can be removed.
< >

Omegaland has been Greenlit and is now listed in the Steam store. For the latest information, purchase options, and discussions for Omegaland, please see it on the Steam Store or in the Steam Community.
Visit Store Page
For more details Visit Community Hub
For latest discussions
If you really, really want to, you can continue to the Greenlight page. Information on this page may be out of date, since all the action has moved to the areas noted above.