Greenlight > Concepts > Mercy Ground Creations's Workshop
Greenlight is being retired. For more information on how to submit games to steam, refer to this blog post.
This item has been removed from the community because it violates Steam Community & Content Guidelines. It is only visible to you. If you believe your item has been removed by mistake, please contact Steam Support.
This item is incompatible with Greenlight. Please see the instructions page for reasons why this item might not work within Greenlight.
Current visibility: Hidden
This item will only be visible to you, admins, and anyone marked as a creator.
Current visibility: Friends-only
This item will only be visible in searches to you, your friends, and admins.
Ama's Lullaby - Prologue
Description Discussions1 Announcements3 Comments17 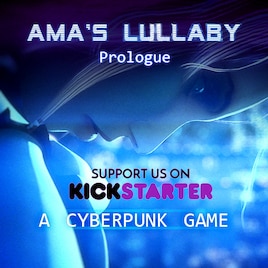 We’ve achieved 25% on Kickstarter and that's great news for the future of Ama's Lullaby!

New limited perks are available: "Outer Space Settler Ltd." and "The Postman" --> wallpapers and postcards! Hope you'll like it!

Here we are, the campaign for Ama's Lullaby is now live on Kickstarter!

Ama's Lullaby is an adventure game in the style of Westwood Studios' Blade Runner (1997), featuring a command-line based hacking system.

After the announcement of a potential impact between Earth and an asteroid, a space mission of colonization lead by an AI brings a young computer-science prodigy called Ama to the 1st colony on another planet. This place was built by machines for human beings. Ama has designed this AI together with her father and is now an ambassador of the human race. She’s being protected by her artificial creature. But when she finds out the actual reason of her presence in this colony, and notices the strange behaviour of its inhabitants, her world suddenly falls apart.

Ama's Lullaby is a point-and-click video game taking place in a cyberpunk environment. Playing the role of Ama, a high potential teenager who loves computer sciences, you will explore the colony, meet its human and non-human inhabitants, negociate with the AI and make decisions that will impact directly the course of events. Thanks to Ama’s programming talent, you will be able to hack any network of the city, gather information, steal confidential data to use them for your own purposes, disclose them or even blackmail people. But be careful : every action will have consequences on the story, and you will become an easy prey once you identity is unveiled.
The game development will focus mainly on high-quality visual atmospheres and soundscapes dialogues and interactions between characters, as well as on replayability: every new game session offering a (truly) different experience.

A crowdfunding campaign is currently running on Kickstarter: the development process will resume as soon as the campaign is over. The release is planned for spring 2019.
Popular Discussions View All (1)

Berathraben Mar 21, 2017 @ 12:31pm
@Robbert Bobbert I just spoke with the dev of Ama's Lullaby. For some reason he cant post any updates here so until that issue is resolved any communication with him has gone dark on this Steam thread. :( He commented on your question.

"The choices won't affect skills, only the characters' behaviours (and the story, so...). You won't have to choose between good/evil or light/dark, I want something subtle and nuanced, quite unpredictable, with Cornelian dilemmas."

Berathraben Mar 21, 2017 @ 11:59am
Take a look some of the new rewards offered. Box set and special ed box set tiers and add ons are now available as well as mutiple key add ons. :)

Here is some of the beautiful art concept and a video of pre -alpha footage in update 10.

This game needs our support. There are only 3 days left to be a limited backer and bring this game to life. As I said above there are a lot of exclusive goodies to pledge for. So, please check it out and spread the word. And if you like, any pledge, no matter how moddest will be very appreciated. :) Cheers

Robbert Bobbert Mar 12, 2017 @ 5:32pm
Will it be like the Mass Effect series where it might change future options and have consequences that influence the in-game flavor text and companion choices, but really don't change the overall story arc or will it be more like the classic text based adventure games where every choice you make (including which path you take) may drastically alter the overall story arc of the game. Or will it be more of a middle ground along the lines of the MMO, Star Wars: The Old Republic where if you make choices that change your light or dark side affiliations, that can change which side quests and gear are available to you and even infulence the overall story arc, but really only changes the story between one of two options (light side story and dark side story).

Robbert Bobbert Mar 12, 2017 @ 5:32pm
In the video it says that each choice matters and will have consequences. I was wondering if you could elaborate on that. Will it be that each choice has the potential to affect some stat or resource pool (like health, willpower, enturance, energy, etc..) or will it be that each choice will determin the next step taken or future options or consequences. At the heart of what I'm trying to figure out is wether or not in-game actions and choices will affect the in-game story arc and if so, how much of an affect with that be.

Mercy Ground Creations  [author] Feb 16, 2017 @ 4:45am
@Bob Bamsen: No it's not :) This prologue does have an ending – actually, even the following part has already been written, but developing a game based on the latter would be too ambitious at the moment. This prologue enables to begin with something more feasible. Depending on the feed­back that this 1st part will receive, the rest of the story will be turned into a game later.

Bob Barnsen Feb 15, 2017 @ 9:34pm
"Prologue"?
I really hope this is not some other crap project that gets released in episodes.