Greenlight > Games > Stirring Dragon Games's Workshop
Greenlight is being retired. For more information on how to submit games to steam, refer to this blog post.
This item has been removed from the community because it violates Steam Community & Content Guidelines. It is only visible to you. If you believe your item has been removed by mistake, please contact Steam Support.
This item is incompatible with Greenlight. Please see the instructions page for reasons why this item might not work within Greenlight.
Current visibility: Hidden
This item will only be visible to you, admins, and anyone marked as a creator.
Current visibility: Friends-only
This item will only be visible in searches to you, your friends, and admins.
Unknown Realm: The Siege Perilous
Description Discussions2 Announcements2 Comments110 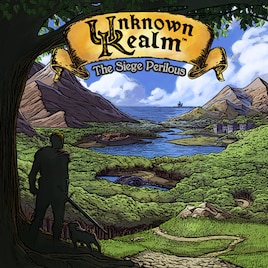 After two weeks on Greenlight, we are thrilled to announce that Unknown Realm: The Siege Perilous has been greenlit by the Steam community!!

Thank you all for your support! We look forward to bringing the 8-bit RPG revolution to Steam! :)

Just a heads up. Today is the final day of our Kickstarter campaign. If you haven't already, come and see what it's all about before it's over! :-)

Read More
Description
Release date: Dec 2017
Unknown Realm: The Siege Perilous is a true 8-bit fantasy role-playing game for PC and Mac inspired by the classic tile-based RPGs of the 80's such as Ultima, Legacy of the Ancients and Wasteland. Master medieval weaponry, descend into the depths of dungeons, navigate the treacherous seas, and learn to harness the power of the Elderstones in order to survive in this realm of monsters and magic.

Turn Based Combat
Simple attack + direction targeting keeps you in the action. Hot keys for primary/secondary weapons toggle. Turn based combat that feels like real-time. Combat can take place in overworld as well as zoomed-in mode.

Companion NPCs
Go it alone or choose from a variety of animal companions, mercenaries, and other NPCs to fight along side you.

See many more details about the game on our Kickstarter Page!

Stirring Dragon Games  [author] Dec 12, 2018 @ 5:48pm
Anyone who would like to get updates about this game should sign up for our mailing list on our website [www.stirringdragon.games]. As most of you know, Steam Greenlight has been retired so if you’re on our mailing list you’ll be the first to know when our new Steam Store page goes live. You’ll also be the first to hear about any other exciting developments from Stirring Dragon Games. ;-) We’re also very responsive to emails (hello@stirringdragon.games) so feel free to contact us directly if you have questions.