Greenlight > Games > JNI-Games's Workshop
Greenlight is being retired. For more information on how to submit games to steam, refer to this blog post.
This item has been removed from the community because it violates Steam Community & Content Guidelines. It is only visible to you. If you believe your item has been removed by mistake, please contact Steam Support.
This item is incompatible with Greenlight. Please see the instructions page for reasons why this item might not work within Greenlight.
Current visibility: Hidden
This item will only be visible to you, admins, and anyone marked as a creator.
Current visibility: Friends-only
This item will only be visible in searches to you, your friends, and admins.
Ancient Warfare 2
Description Discussions5 Announcements2 Comments419 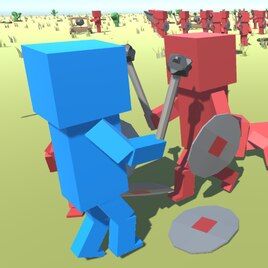 JNI-Games
Offline
See all 85 collections (some may be hidden)
Recent Announcements View All (2)
Ancient Warfare 2 got greenlight!
January 24, 2017 - JNI-Games

Thanks to all, who voted!
I will work hard to improve the game and publish it on steam.
Any feedback is appreciated, I will read everything that you suggest!
More info about the release will be published very soon after the next update(28th January).
Until the Happy playing!

After the large content update a few days ago, the third update will focus on fixes and functionality, but there will be more content, too.
Content:

The update will release on the 25th January. [Edit: Delayed to the 28th January]
Thanks to all who voted, the game already reached rank 71!
Read More
Description
Ancient Warfare 2 is a low poly third and first person game.
You take control of a small blue unit and fight against the large red empire or you can watch battles of blue vs. red!
You can use different melee and ranged weapons, shields, animals and siege weapons to kill your enemies and cut them into pieces.
Create custom battles with the custom battle editor, choose terrain, gamemode, conditions, place enemies and allied troops, build a castle and get ready for heavy battles!
If you don't want to prepare a battle, let the game create a battle for you!
Play conquest, king of the hill, siege a castle/towers to kill a king or play the campaign with 60 levels.
Much more content and features are on the way!
Ancient Warfare 2 is a huge sandbox with many possibilities!

You want to test the game?
Visit me on itch.io: {LINK REMOVED}https://jni.itch.io/ancient-warfare-2
You want to see more?
There are many videos on youtube.
You want to contact me?
Write me an email: janniknickel.info@gmail.com

Before saying that this would be a totally accurate battle simulator, please read the following or at least try the game, to see how different it is!
Please note that I created the concept of the game for ludumdare 36 "Ancient technology". I wasn’t aware of tabs when I started the development and the only real similarity is that you can just watch the battles. The focus of this game is to actually play a character in different gamemodes. Can you build a castle und tabs? Can you play all those game modes in tabs? Are there procedural battles in tabs? Is there dismemberment and blood in tabs? I won't add future and fantasy stuff like tabs, I want to use realistic units. So, I think it's very different from tabs. If you don't believe it, you can test the game.
< >
419 Comments