Greenlight > Games > Crema's Workshop
Greenlight is being retired. For more information on how to submit games to steam, refer to this blog post.
This item has been removed from the community because it violates Steam Community & Content Guidelines. It is only visible to you. If you believe your item has been removed by mistake, please contact Steam Support.
This item is incompatible with Greenlight. Please see the instructions page for reasons why this item might not work within Greenlight.
Current visibility: Hidden
This item will only be visible to you, admins, and anyone marked as a creator.
Current visibility: Friends-only
This item will only be visible in searches to you, your friends, and admins.
Immortal Redneck
Description Discussions5 Announcements3 Comments436

Crema
Offline
See all 24 collections (some may be hidden)

View Immortal Redneck in the store

Thank you again for voting us on Greenlight. We just set-up our Steam page and Immortal Redneck will be coming soon. Don't miss the opportunity to play it and add it to your wishlists! 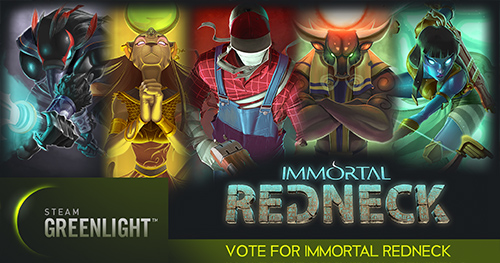 Thank you so much to everyone that has voted us! We've been Greenlit in just a week.

The game revolves around a redneck tourist who wakes up mummified in ancient Egypt after an accident. Why is he here? How did he survive the accident? And why the hell is he mummified?!

The answer lies within the three danger-filled pyramids of Giza, all protected by an army of monsters and huge bosses. Obviously, your mission is to get inside the pyramids, kill all the enemies and discover what's going on!

Three pyramids await you when you leave the sarcophagus you awake in. Each one features a different environment, a different set of enemies and powerful bosses whose only aim is to kill you. A lot.

The dungeon inside each pyramid is randomly generated each time you play, so every time you die, you have to face a new, unique layout of rooms. As you explore the vast area in search of special rooms, you will come upon traps, gifts from the Gods and huge enemies.

Each time you die, you will come back to life in your sarcophagus outside the pyramid with all your previously earned money intact. Your next step should be obvious: spend the money to acquire skills and abilities. Where? At the Skill Tree!

Offer your gold to the Gods to upgrade your skills and, literally, grow your own tree of life. Unlock new classes, abilities and weapons, improve your stats and discover new ways to reach the top of the pyramids. The Skill Tree has it all!

Upgrade your character by playing. Every time you play, you get a little stronger. Never go back to square one.

Immortal Redneck features more than 50 weapons. There are traditional, magical, mythological, futuristic and just plain weird weapons. You name it, this game has it. There’s even a potato launcher because…why the hell not?!

Each of the nine classes offers a different set of weapons, some of which can only be obtained by defeating specific enemies. For example, some hold more bullets and some are more powerful. In order to succeed, you’ll have to combine just the right weapons to find your favorite ones.

Immortal Redneck has been in development for approximately a year and a half. The core of the game is up and running, so we’re almost finished – we just have a bit more content to add to the game, i.e. new enemies, weapons and rooms.

To stay up to date on all news about Immortal Redneck, follow us on social media.

Popeye Feb 10, 2017 @ 4:47am
this game truly looks beatuful. excellent made trailer!
if you ever need someone to make a video and test the game i will happily volunteer.
i respect if you dont want to.
my youtube channel: https://www.youtube.com/channel/UC9Amn_ECuhZ9mxkZ46srdJQ

Immortal Redneck has been Greenlit and is now listed in the Steam store. For the latest information, purchase options, and discussions for Immortal Redneck, please see it on the Steam Store or in the Steam Community.
Visit Store Page
For more details Visit Community Hub
For latest discussions
If you really, really want to, you can continue to the Greenlight page. Information on this page may be out of date, since all the action has moved to the areas noted above.