Greenlight > Games > jan.zeleny's Workshop
Greenlight is being retired. For more information on how to submit games to steam, refer to this blog post.
This item has been removed from the community because it violates Steam Community & Content Guidelines. It is only visible to you. If you believe your item has been removed by mistake, please contact Steam Support.
This item is incompatible with Greenlight. Please see the instructions page for reasons why this item might not work within Greenlight.
Current visibility: Hidden
This item will only be visible to you, admins, and anyone marked as a creator.
Current visibility: Friends-only
This item will only be visible in searches to you, your friends, and admins.
Mashinky
Description Discussions6 Announcements12 Comments533

jan.zeleny
Offline
See all 30 collections (some may be hidden)

View Mashinky in the store

New status report of Mashinky development is took more than I expected, but it is finally here!

Mashinky's got some new 3D assets, for example very first diesel locomotive (Br class 3)! I've also moved most of map generating algorithms from CPU to the GPU, so Start new game it is more than 10 times faster!

UI has been improved a lot. Now all quests are visible on the left side of the screen and on the right side, there are game messages (like that storage is full, train has no orders or trains crashed into each other).

The biggest change from my perspective is adding new game option cathegory "Hardcore" where you could find very challenging game options. The very first switch cause train to not magically turn around, but it starts to go on reverse instead (with some speed limitations) and you have to solve it somehow (with better track / routelist design, secondary locomotive on the train tail, etc).

..and last but not least: Mashinky won "Best gameplay" and "Peoples choice" awards in Game Access '17 conference! And thanks to this, I shaked hands with Chris Avellone! 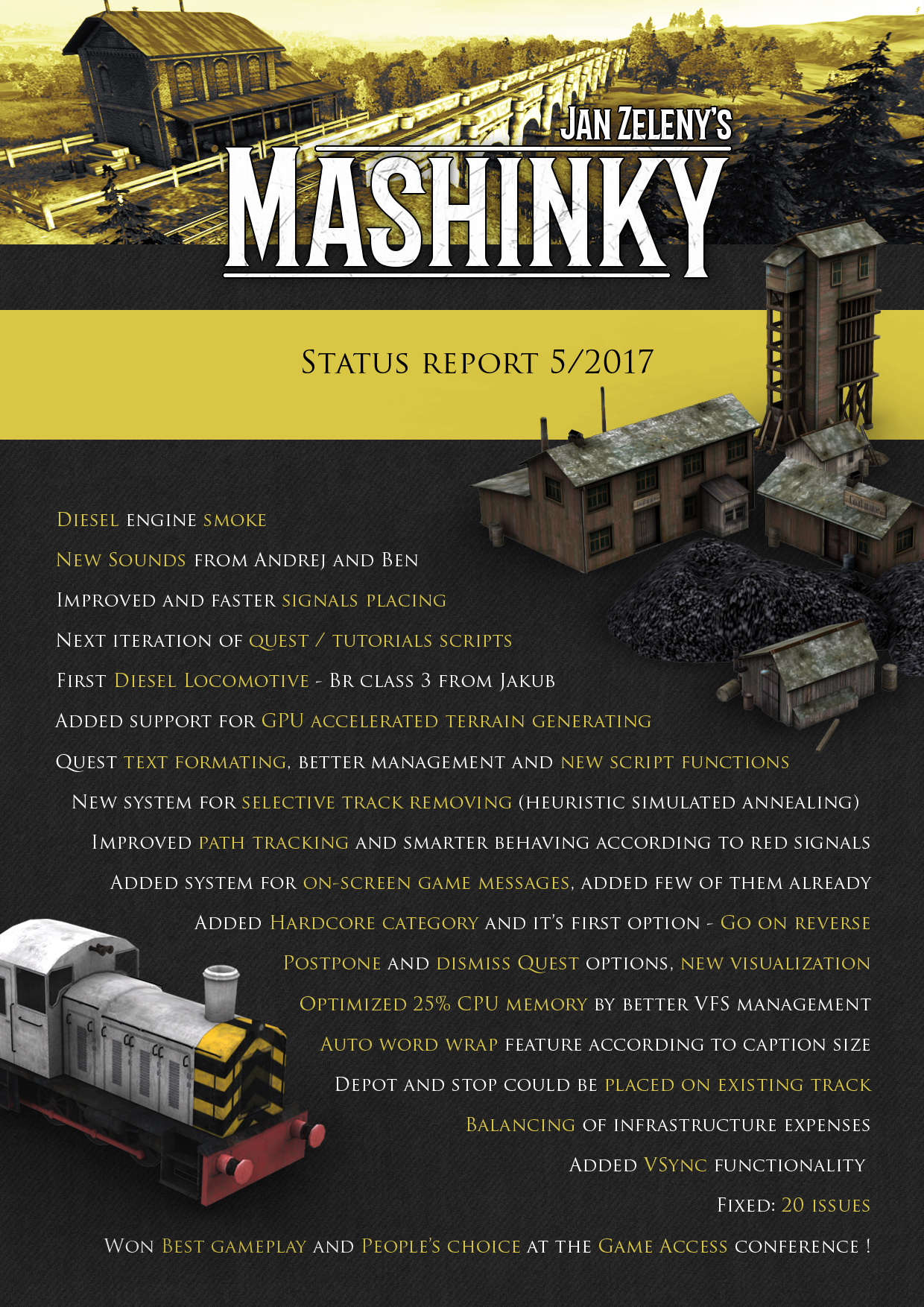 New status report of Mashinky development is finally here! I started cooperation with skilled scripter and therefore we have aproximatelly 36 scripted events in game.

There are not so many new features, since I focused mainly on bugfixing, but at least the game has better script support including new on-screen quests summary and there is also first "hardcore" feature, where trains do not turn around at the end of a track, but they have to go on reverse and you need to turn around them somewhere, build circle endless track, buy second tail engine or just accept lower speed when go on reverse. It is optional, but could bring new challenges. 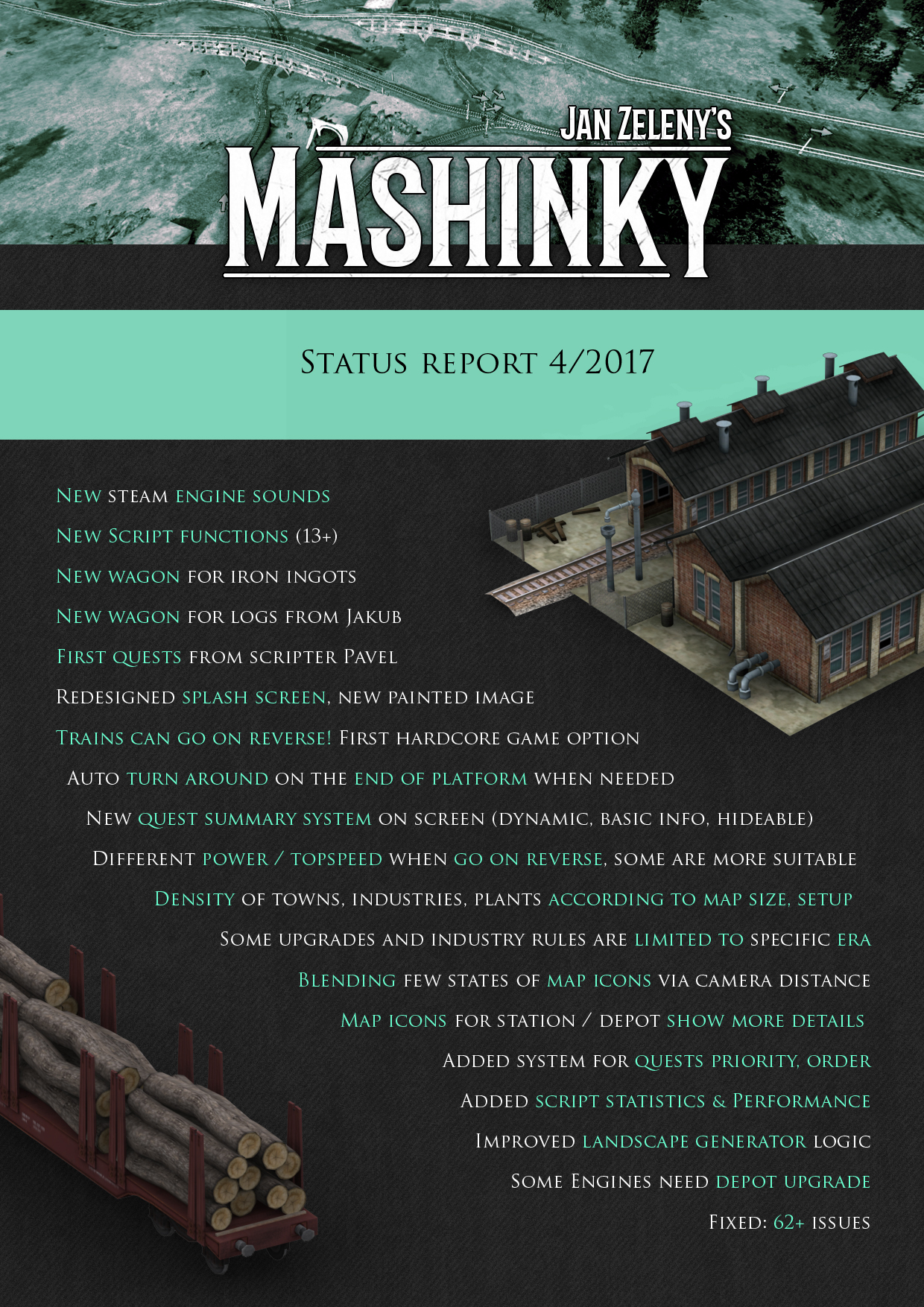 Build and manage your own transport empire in a procedural-generation worlds, offering endless possibilities in a sandbox-style gameplay. The right strategy will always be a different one!

Uniquely combining realistic graphics with old-school construction mode with rules inspired by board games, Mashinky combines the best of both worlds: eye-candy of 3D visuals and addictiveness of isometric gameplay, adding its own unique vibe in the process.

Inspired by classic games from the 90s especially by Chris Sawyer's Transport Tycoon and Sid Maier's Railroad Tycoon 2. It takes it to the next level with features such as multiplayer and endless modding possibilities, the result is a deep and challenging game made by a fan, for fans, that will make every train sim enthusiast come back for more.

This game is developed for more than 7 years by a single man who loves old tycoon games. It is build on very own engine writen in C++ with DirectX which is specifically designed for this type of game.

I have learned a lot while participating in the development of Mafia II, Mafia III and DayZ. Mashinky was always my side project where I used freely all my creativity and passion for game development.

Mashinky game is currently in prealpha stage where first two eras are being polished.
At the end of Q1 2017, there will be Early Access version available with regular updates including new content and polishing.

RAMMAR Aug 4, 2017 @ 11:46am
TTD in 3D, I was just dreaming about that day to come, Open TTD was good, Locomotion was good too (except those Roller Coaster engine bugs). So, I'm in wait for this day to come. As for the train simulators, those are good, but this one will have the spirit of the TTD...

jan.zeleny  [author] Aug 1, 2017 @ 6:21am
Gorbovsky - hez and thanks for the question. Unfortunatelly I do not plan to release a demo, since it would require extra development time (and I am the only programmer:), and there is steam refund system allowing it instead.

Mashinky has been Greenlit and is now listed in the Steam store. For the latest information, purchase options, and discussions for Mashinky, please see it on the Steam Store or in the Steam Community.
Visit Store Page
For more details Visit Community Hub
For latest discussions
If you really, really want to, you can continue to the Greenlight page. Information on this page may be out of date, since all the action has moved to the areas noted above.