Greenlight > Games > nathanmeunier's Workshop
Greenlight is being retired. For more information on how to submit games to steam, refer to this blog post.
This item has been removed from the community because it violates Steam Community & Content Guidelines. It is only visible to you. If you believe your item has been removed by mistake, please contact Steam Support.
This item is incompatible with Greenlight. Please see the instructions page for reasons why this item might not work within Greenlight.
Current visibility: Hidden
This item will only be visible to you, admins, and anyone marked as a creator.
Current visibility: Friends-only
This item will only be visible in searches to you, your friends, and admins.
Missile Cards
Description Discussions0 Announcements5 Comments39 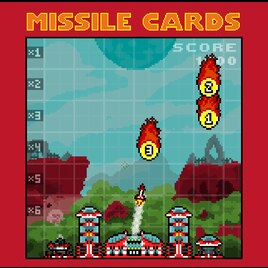 View Missile Cards in the store

Missile Cards is nearing completion, and I'm looking for Beta testers! The closed PC Beta will begin a week from today, so if you want an opportunity to kick the tires and help improve the game ahead of launch, now is your chance!

Your feedback is super appreciated, as it'll help me fine tune the gameplay and get a sense of what needs to be fiddled with to get the game ready for launch in the next few months. Thanks in advance!

Read More
We're Greenlit! THANKS SO MUCH!
January 25, 2017 - nathanmeunier

Exciting news! We made it! I wanted to take a moment to thank everyone who voted to support bringing Missile Cards to Steam! I just found out last night that we were Greenlit thanks to your help. You ROCK!

So...with Greenlight out of the way, where are things at then?

Missile Cards is quite far along in development, and despite battling a wicked cold right now, I'm pushing to implement the last core systems, polish things up, and prep for a closed Beta soon. I'm looking for player feedback to help uncover any lingering bugs, fine-tune the difficulty, and improve the game across the board ahead of the full launch.

My goal is to launch before the end of Q1 if possible, which will be a lot of work, but is very feasible given the constrained scope of the project.

If you'd like to be a Beta tester or be notified when the game is live, go ahead and join my mailing below (I won't spam you, promise), and I'll keep you posted. Thanks a bunch!

"It's kind of like Missile Command, only re-imagined as a turn-based strategy card game."
Arm your defenses and blast away flaming death orbs, nuclear warheads, and other hazards hurtling down from space before they annihilate your base. Loosely inspired by the Atari classic Missile Command, Missile Cards re-imagines the intense bombardment defense gameplay as a turn-based card game. Unlock new bases, upgrade your arsenal, complete missions, and challenge your card skills against increasingly brutal decks in this highly replayable solo-card game.

Missile Cards is being made with GameMaker: Studio.
Join my mailing list to find out when the game launches, and be notified of beta testing opportunities!

nathanmeunier  [author] Mar 23, 2017 @ 5:08pm
Quickie update! Missile Cards will be dropping on Steam on April 7th, and the game has undergone a HUGE amount of updates, polish, and new/added coolness over the past few months. Mega thanks to my rad beta testers, who've helped me improve, speed up, and tune the game through excellent feedback.

nathanmeunier  [author] Feb 9, 2017 @ 10:25am
Thanks all! Making epic progress on Missile Cards, now that we're Greenlit, and I've updated and improved a ton in the past few weeks. I'll be putting up a coming soon page on Steam shortly and prepping a closed beta very soon! Look for Missile Cards to hit Steam around late March/April!

nathanmeunier  [author] Jan 21, 2017 @ 8:34am
Thanks @deadlockUK! Interesting point RE: kickstarter/physical copy. I had been wondering if there might be a way to adapt this to a proper meatspace card deck version. Def something I've been considering for down the road. :) Focusing RN, though, on getting through Greenlight and launching on Steam. But thanks for mentioning it and reminding me!

nathanmeunier  [author] Jan 14, 2017 @ 8:00am
Updated the card art designs a bit, adding new gameplay and cool systems/unlocks. Missile Cards is coming along. Could def use more Yes votes so we can get this thing out the door sooner than later.

Missile Cards has been Greenlit and is now listed in the Steam store. For the latest information, purchase options, and discussions for Missile Cards, please see it on the Steam Store or in the Steam Community.
Visit Store Page
For more details Visit Community Hub
For latest discussions
If you really, really want to, you can continue to the Greenlight page. Information on this page may be out of date, since all the action has moved to the areas noted above.