Greenlight > Games > Andy's Workshop
Greenlight is being retired. For more information on how to submit games to steam, refer to this blog post.
This item has been removed from the community because it violates Steam Community & Content Guidelines. It is only visible to you. If you believe your item has been removed by mistake, please contact Steam Support.
This item is incompatible with Greenlight. Please see the instructions page for reasons why this item might not work within Greenlight.
Current visibility: Hidden
This item will only be visible to you, admins, and anyone marked as a creator.
Current visibility: Friends-only
This item will only be visible in searches to you, your friends, and admins.
Gravity Simulator
Description Discussions0 Comments19 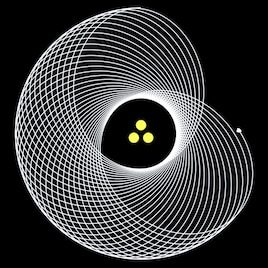 Andy
Offline
See the collection (may be hidden)
Description
Release date: Early 2017
Fling Planets and Change Physics
Gravity Simulator lets you control one of the most basic forces in the universe. Launch stars and planets, and watch as gravitational patterns unfold. Peaceful conic sections, dancing spirals, wonderful spirographs, and plenty of utter chaos will appear before your eyes.

But your powers don't stop there - you can also change the underlying physics of the simulation. Maybe, instead of a 1/r^2 force law for gravity, you'd like to see what happens if there were a 1/r^2.1 force law. Or a tan(r) force law. Or any strange force law you can come up with. You can even turn on General Relativity, and see what happens in a world where a massive object warps space. What weird and fascinating universes can you create by playing with the laws of physics?

If you like what you've created, it's easy to save it and share with friends. Show off a work of art, an interesting physics phenomenon you discovered, or, ideally, both at the same time.

I'm excited to bring the simulation to Steam to see what you all can create!
< >
19 Comments

@poofoo5: I know, I love universe sandbox. I like to think I'm aiming for a different target with this sim (roughly: less exploring astronomy, more exploring physics). But yeah, thumbs up to their sim.

@Moisha: It is indeed more sandbox, and not really game. I had toyed with adding some game-like structure over it, but found it distracted from the real fun, which was seeing what cool stuff you could make.

poofoo5 Dec 9, 2016 @ 11:01am
We have a majorly improved concept of this game known simply as universe sandbox, your version is just a slighly easier to use layout. The game is very genaric so adding things like ships or planet explosions and what-not can possibly make this game worth while.
< >