Greenlight > Games > Systemic Games's Workshop
Greenlight is being retired. For more information on how to submit games to steam, refer to this blog post.
This item has been removed from the community because it violates Steam Community & Content Guidelines. It is only visible to you. If you believe your item has been removed by mistake, please contact Steam Support.
This item is incompatible with Greenlight. Please see the instructions page for reasons why this item might not work within Greenlight.
Current visibility: Hidden
This item will only be visible to you, admins, and anyone marked as a creator.
Current visibility: Friends-only
This item will only be visible in searches to you, your friends, and admins.
Bomb Squad Academy
Description Discussions0 Announcements2 Comments213 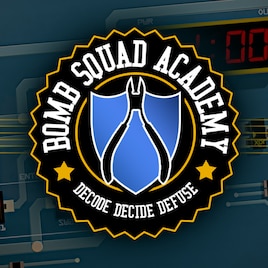 Systemic Games
Offline
See all 24 collections (some may be hidden)

Thanks to all of you, Bomb Squad Academy has just been greenlit!
To celebrate we uploaded an updated demo over on itchio[systemic-games.itch.io] that includes a couple extra levels. :)
As mentionned before, we plan to release the full game in the first quarter of 2017. Stay tuned!

Wow, only 4 days, and already Bomb Squad is #50 on Greenlight! I did not expect this.
And the comments have been so incredibly supportive, you guys are great!

To celebrate, we just put together a build of the first 15 or so levels, for those interested.
Demo on Itchio[systemic-games.itch.io]
Keep in mind that this is an early build, so some stuff is missing, but it should give a good sense of the pace and difficulty of the game. Good luck!

Q&A
Will the game be available on Mac and Linux ?
Most likely! While I don't want to promise anything I can't deliver, all we really need for this is to be able to test the executables. As soon as the Windows version is out we'll get on the other platforms.

How about making a mobile version, it seems like it would work well for that?
Not out of the question, since the core interaction of the game would translate well, but not part of the plan at this time.

And VR ?
Probably not, but I'm personally a big fan of VR and have everything I need to try, so who knows... :)

How long will the game be ?
I think the game will take about an hour or so, with anywhere between 50 and 100 puzzles, at least for the initial release.

How much will the game cost ?
While I would love for Bomb Squad to make us rich, I have no delusion about its worth, it'll be a few bucks at most. That or we could make it free and charge people every time they die! What do you think? Or maybe ads, really loud ones, everywhere, while you play... ;)

Will there be an Early Access version?
Probably not. I think that Early Access is warranted for more sandbox-y types of games, but for a puzzle game like this, I think it's okay to release free updates with more levels without needing to call the game unfinished.

So when will the game be out?
First quarter 2017, but it's very likely we'll update the demo version between now and then as well.

Thank you!
Read More
Description
Release date: first quarter 2017
Save the world one wire at a time with Bomb Squad Academy, a puzzle game where you have to defuse bombs under a time constraint.

Analyze the way the electronic boards function and identify how to disable the detonator. Be careful though, cutting the wrong wire or flipping the wrong switch might just trigger the bomb.

As you progress through the game, you will be faced with increasingly challenging circuits that will test your ability to work through logic puzzles quickly. Identify the components, understand the connections and learn what makes the circuit work. Do it fast enough and you might just make it through. Good luck!
< >
213 Comments

Kroz Feb 7, 2017 @ 1:43pm
I've played the demo version and i think that is a good concept for a game, because, compared to other indie, this is not "mainstream"

HellCow Jan 2, 2017 @ 10:44am
Hey, if your interested i coud promote your game or/and if you need/want i test the game to write a review for it and find glitches/bugs if there are any.
Also i can get some more testers if necesary, Add me if interested in steam or send me a mail: Liecis19@gmail.com

DerSchokoKeksLP Dec 27, 2016 @ 1:53pm
Awesome game, I absolutely loved it! I played the whole demo and it was amazing. Very well done to the devs on this one, it was awesome!
< >

Bomb Squad Academy has been Greenlit and is now listed in the Steam store. For the latest information, purchase options, and discussions for Bomb Squad Academy, please see it on the Steam Store or in the Steam Community.
Visit Store Page
For more details Visit Community Hub
For latest discussions
If you really, really want to, you can continue to the Greenlight page. Information on this page may be out of date, since all the action has moved to the areas noted above.