Greenlight > Games > ENDESGA's Workshop
Greenlight is being retired. For more information on how to submit games to steam, refer to this blog post.
This item has been removed from the community because it violates Steam Community & Content Guidelines. It is only visible to you. If you believe your item has been removed by mistake, please contact Steam Support.
This item is incompatible with Greenlight. Please see the instructions page for reasons why this item might not work within Greenlight.
Current visibility: Hidden
This item will only be visible to you, admins, and anyone marked as a creator.
Current visibility: Friends-only
This item will only be visible in searches to you, your friends, and admins.
NYKRA
Description Discussions2 Announcements5 Comments128 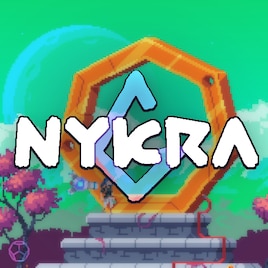 ENDESGA
Offline
See all 18 collections (some may be hidden)
Kickstarter

View NYKRA in the store

Thanks everyone for helping and being part <3

NYKRA HAS BEEN GREENLIT! WAHOO!

The Kickstarter still has 2 weeks to go, so please show your suport and help us get this game into your hands <3

Read More
Description
>_ Before you, before me. Discover the first born galaxy, Nykra. Find your purpose, as a child of Nenoux...
Explore, learn, and understand. Travel the vast lands, and uncover mysteries - all inspirited by ancient tales.
NYKRA is a 2D platformer adventure game, planned for Windows, macOS, and Linux. You travel as Keu, a child of Nenoux, accompanied by a lost experiment - the hyperdrone known simply as Eo.
Keu manifested from the dust of Omwarn; a place beyond and before everything. She lands on a grassy planet called Maldis, and discovers secrets that lead her to a black cube called the Boldemo.
You are surrounded by new languages, new people, and... a new mind.

Little did the 7 Beings know, Keu was born with free-will and empathy. As she travels, she faces situations where actions are influenced by her compassion.

The 7 Beings told Keu to find the holding cell called Evokreathe, a place that an Unseeable Darkness sleeps... On your way there, you uncover secrets, and discover long lost places - since a lot of Nykra's living creatures died out eons ago...

You are given choices, and what you do can have consequences.

THIS GREENLIGHT IS A WAY TO SHOW YOUR EXTENDED SUPPORT.
NYKRA IS NOT A CONCEPT, FOR IT HAS BEEN A DEVELOPED DREAM OF OURS FOR 6 YEARS.
Popular Discussions View All (2)

Can't wait for Jim to do some Greenlight good stuff on this!
Yreid

MegaManSlashEXE Jan 28, 2017 @ 8:09pm
The Kickstarter campaign was around $20. So the release game will likely be about that or maybe $25-$30. They were selling copies in New Zealand currency so I forgot the conversion difference. :P

NYKRA has been Greenlit and is now listed in the Steam store. For the latest information, purchase options, and discussions for NYKRA, please see it on the Steam Store or in the Steam Community.
Visit Store Page
For more details Visit Community Hub
For latest discussions
If you really, really want to, you can continue to the Greenlight page. Information on this page may be out of date, since all the action has moved to the areas noted above.