Greenlight > Games > V7 Entertainment's Workshop
Greenlight is being retired. For more information on how to submit games to steam, refer to this blog post.
This item has been removed from the community because it violates Steam Community & Content Guidelines. It is only visible to you. If you believe your item has been removed by mistake, please contact Steam Support.
This item is incompatible with Greenlight. Please see the instructions page for reasons why this item might not work within Greenlight.
Current visibility: Hidden
This item will only be visible to you, admins, and anyone marked as a creator.
Current visibility: Friends-only
This item will only be visible in searches to you, your friends, and admins.
Old Time Hockey
Description Discussions2 Announcements3 Comments62 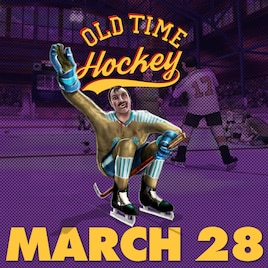 V7 Entertainment
Offline
See all 5 collections (some may be hidden)

We have unveiled all 10 teams which make up the rough and tumble Bush Hockey League and here's who you can lace up as in-game!

Thank you for your support which has taken us one step closer to releasing Old Time Hockey on Steam. Today we are proud to officially announce the development of Old Time Hockey. The title is set for release in early 2017. The full text of this press release can be found at http://www.v7entertainment.com/press and more information on the game can be found at: http://www.arcadehockey.com

Read More
Description
Release date: March 2017
Old Time Hockey features 5-on-5 arcade hockey gameplay where players will their opponents to submit through rough and tumble aggressive hitting and fighting. Players are expected to contest for the puck by taking the body and hitting the opponents through a myriad of available body checks (hits) such as elbows, shoulder checks, cross checks, hip checks, and the dirty clotheslines. Timely hits allow the team to go on fire (momentum) and inflict further damage on their opponents which will cause the opponents to want to drop the mitts and fight. That's right, aggressive hockey is back in town! Experience hockey the way it was meant to be played - single fights, line brawls, bench brawls, goalie fights, stick fights, knockouts and injuries, molestation of refs - Old Time Hockey has it all! Win the fights and you have fatigued your opponent's teammates for good thereby giving you a clear advantage to score goals and win the hockey game. Better yet, injure most of your opponent's teammates and you will win the game by way of a forfeit. That's Old Time Hockey - I went to a fight the other night, and a hockey game broke out!

*BEER MODE*
Beer and Hockey go together like bacon and eggs! Old Time Hockey features a Beer Mode input preset and selecting these controls let you play the game with ONE hand so you can hold and drink your beer with the other!
Popular Discussions View All (2)

Peer-to-Peer Multiplayer - Is there a chance?
Laggy

Ice Cream Jonsey Feb 27, 2017 @ 9:14am
Haha, wilco64256 "reported it" while he peppers Steam with grotesque shovelware in his own Greenlight projects. What a loser.

Created un-official group for Old Time Hockey because im very hyped for this game just like all of you guys!
< >

Old Time Hockey has been Greenlit and is now listed in the Steam store. For the latest information, purchase options, and discussions for Old Time Hockey, please see it on the Steam Store or in the Steam Community.
Visit Store Page
For more details Visit Community Hub
For latest discussions
If you really, really want to, you can continue to the Greenlight page. Information on this page may be out of date, since all the action has moved to the areas noted above.