Greenlight > Games > Black Chicken Studios, Inc.'s Workshop
Greenlight is being retired. For more information on how to submit games to steam, refer to this blog post.
This item has been removed from the community because it violates Steam Community & Content Guidelines. It is only visible to you. If you believe your item has been removed by mistake, please contact Steam Support.
This item is incompatible with Greenlight. Please see the instructions page for reasons why this item might not work within Greenlight.
Current visibility: Hidden
This item will only be visible to you, admins, and anyone marked as a creator.
Current visibility: Friends-only
This item will only be visible in searches to you, your friends, and admins.
Academagia: The Making of Mages
Description Discussions0 Comments57 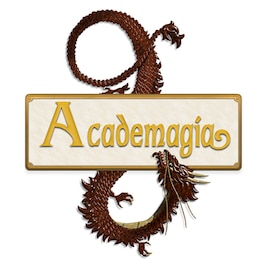 Black Chicken Studios, Inc.
Offline
See all 4 collections (some may be hidden)

View Academagia: The Making of Mages in the store

Store page
Description
Release date: April 2017
You probably didn’t personally apply to learn magic at the old school. Don’t get me wrong – if you did, more power to you!

It’s just that you have the look of one of the ones who was chosen. Maybe an augur picked you out for a greater destiny, maybe your hometown mayor got sick of having you set fires with a crappy old wand and a couple of Phemes you got off a tattered scroll in the orphanage basement. Maybe your parents are airship pirates and they’re dumping you off in Mineta so you can learn what’s worth stealing.

All I know is that you’ve gotten the invitation, which means that all the Astrologers that College Avila has on call think you have the stuff to succeed. So, hey, good for you!

If your parents are alive, Gods love them, I’m sure they’ve told you to go to all your classes, get good grades, and do your best to stay out of trouble. That would be great! There are hundreds of skills and scores of spells for you to pick up, acing all your classes will serve you well in life, and… well, let’s face it, the more you learn in a school of magic, the better prepared you’ll be when random events conspire against you. There’s no one way to play the game of life, and this is as rewarding an approach as any.

But, like I said before, you kind of have a look about you.

So, for the record, if you sneak out for adventures: watch out for the city. There are gangs. There’s a thieves’ guild – or maybe several, depending on how you look at it. There are conspirators trying to drive our good Captain out of high office, and there’s our Captain trying to drive conspiracies nuts. There are crazy wizards and bickering vampires and haunted restaurants and Gods only know what else. The city is a mess.

Also, watch out for the Imperial Reserve. That whole place was left to brew in its own shadows since the Empire of Man shook itself apart – and, honestly, it wasn’t exactly safe even when the Empire was at its peak. The old forest is full of monsters and trapped tombs and fey politics and more crazy wizards, and the old Imperial Palace… well, it’s the size of a city all on its own, and it’s still straining to contain all its ghosts and twitchy soldiers and skulking bandits.
And the Sphinx. Best you don’t even think about the Sphinx.

So, yeah, the city is a mess, and the Reserve is also a mess. The skies? Full of air pirates. All the other flying islands that make up civilization as we know it? Just as bad, only with worse food. And, of course, off at the fringes are the Dragons: the scaly old creatures that enslaved humanity, shattered the first generation of Gods, and are now just waiting for the chance to pick up where they left off.

I’d say it’s safer to explore the Academy of Mineta itself, but let’s be real: the school’s seventeen hundred years old, and it’s been the center of wizard uprisings, undead invasions, and Gods know what all else. You have towers frozen in time at the moment of their collapse, you have professors plotting against one another, and you’ll have dynamic, incredibly complicated relationships between the eighty-some students themselves in your year – and every enemy you make is going to know how to make fireballs with just a stick and a bad attitude. Good luck with all that.

That said, we have no problems with you learning the right kinds of magic. Incantation, the stuff of magical creation? Try not to entomb the city in a horrific magical winter, but otherwise have fun. Negation, the magic of deflection, evaluation, and stillness? Love it. Glamour, the work of illusionists and con artists and ambitious lovers of every stripe? It causes problems, but it’s legal enough. Revision, turning things into other things? Nobody’s going to complain if you fix a tear in your shirt or make your shoe the size of a house. Artifice, the art of enchantment – well, heck, that’s what makes the city work. That and Astrology, the magic of turning the rules of the stars around for your own benefit.

Gates and Mastery, though? Don’t. Just don’t. We don’t want invading armies from other planes of existence. We don’t want deranged wizards making innocent people into puppets. Don’t do it, and beware of anyone who does.
Still… it’s your life, I suppose, and it’s a great big world, filled with an incredibly vast number of things to do and places to go and people to impress. There are hundreds of adventures you can have, and literally thousands of abilities and actions and items you can pick up to improve your odds.

I can’t tell you what you’ll get the most out of. Just try it all and see what sets you on the road to greatness.

And, hey, welcome to the Academagia.

Where will your adventures take you?

"Academagia: The Making of Mages" is a whimsical fantasy life simulation and role-playing game set at the renowned Academy of Magic in the rich and dangerous city of Mineta. As a newly arrived teenager in a strange, vast school, you'll embark on adventures great and small, train your familiar, make friends (and enemies!), and master the shining arts and subtle laws of spell-casting.

- Interact with over 80 Students
- Maneuver through more than 1000 possible Random Events
- Set out upon any of over 200 Adventures
- Explore hundreds of Skills
- Cast Spells from the five Pillars of Magic, or learn the Forbidden Arts
- Add new effects to existing Spells as you master the vocabulary of Magic
- Discover and visit mysterious castles, ruins, shops and secret hide-outs
- Teach, train and adventure with a Familiar from one of dozens of species
- Enjoy nearly endless replayability and scope

Academagia is a 2D PC life simulation and role-playing game intended for audiences ages 9+. Our game rewards relationship building, research and knowledge over violence, and encourages the gamer to create their own unique story. The game is available on www.academagia.com , as well as GamersGate.
< >
57 Comments

Peli Mar 27, 2017 @ 10:05pm
Never thought much about it, but in retrospect vanilla UI was quite wonky indeed, nice to see the game is finally coming around on steam though, hopefully you'll get exposure you deserve guys. Academagia is one of my favorites along with KoDP

We are expected to launch the Steam version in April =). We decided to further revamp the UI based on alpha testing of the new UI.

But now we are in beta and unless there is a show stopper, it will be coming out in April.

We might put up some screenshots of the new UI before the launch though ;) (while we are in beta for the rest of March).

@Poodlestrike
We're not usually too active on the Steam forums- but we're active each day on our official forums. That's usually the best way to reach us quickly. :)

tzubidu Feb 5, 2017 @ 5:47am
From what I could collect there is current a major problem with the scalling of the new UI what result in that they have to get new art. Because most of the art assets of Academagia was bought from freelancer artist they probably have to wait till the artist who have done the original art have time again to make the now needed art.
But if you want more info I suggest you head over to the forum of BCS:
http://academagia.invisionzone.com/index.php?act=idx

Poodlestrike Feb 4, 2017 @ 12:26pm
@Pelicunt, as much as I adore the game and appreciate the people who make it, regular communication is not their forte :P

Academagia: The Making of Mages has been Greenlit and is now listed in the Steam store. For the latest information, purchase options, and discussions for Academagia: The Making of Mages, please see it on the Steam Store or in the Steam Community.
Visit Store Page
For more details Visit Community Hub
For latest discussions
If you really, really want to, you can continue to the Greenlight page. Information on this page may be out of date, since all the action has moved to the areas noted above.