Store Page
Total War: WARHAMMER >  Workshop > Grizzly's Workshop
This item has been removed from the community because it violates Steam Community & Content Guidelines. It is only visible to you. If you believe your item has been removed by mistake, please contact Steam Support.
This item is incompatible with Total War: WARHAMMER. Please see the instructions page for reasons why this item might not work within Total War: WARHAMMER.
Current visibility: Hidden
This item will only be visible to you, admins, and anyone marked as a creator.
Current visibility: Friends-only
This item will only be visible in searches to you, your friends, and admins. 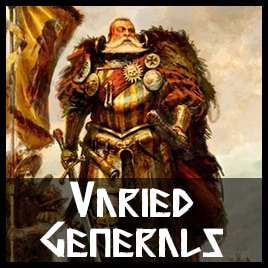 This item has been added to your Subscriptions. Some games will require you to relaunch them before the item will be downloaded.
In 1 collection by Grizzly
warhammer latest

71 items
Description
This mod replaces specific generals with different head models so to limit 'clone' generals. It also adds increasingly more variation between the same generals giving them different equipment such as armor, weapons and shield design. Obiously some will appear twice, just by the nature of how the game generates the meshes - but for the most part you should be getting much more variety on generals.

The aim of this mod was to add a bit more variation to Generals and Lords as a lot of them look far too similar. I got tired of seeing the same models for mainly the Dwarfs and Empire Lords - I mean the empire had three identical models with the long beard just with different hats. Now you don't have to settle between the beard guy with a hat or the beard guy without a hat - you can choose a general that looks completely different!

Save game compatible and compatible with all mods that don't edit General models.

Okay guys - It looks like there is an issue with the campaign model not translating into the battle model correctly. It would appear it generates the model randomly from the variants each time a battle is entered. Not sure why CA did this, but this does restrict how much variation can be put on one type of general. For those who don't mind carry on using this mod. I have, however, made a version which has more restrictive variation, so only 5 models, but they will remain the same in and out of battle - Please see this mod - http://steamcommunity.com/sharedfiles/filedetails/?id=708714316

19/06/2016 - UPDATE - Added much more variety in equipment for all Empire Lord including my replacements - will be implementing across other factions shortly!

18/06/2016 - UPDATE - Added more variety in terms of shield and helmet type to the models I have added for the empire. Tiny changes like more feathers but still noticeable.

18/06/2016 - UPDATE - More variety within the Dwarf Lords - added variations on the Longbeard with helmet Lord, with different armour and leg combinations. Planning on rolling out across all Lords within the mod and any new ones.

15/06/2016 - Fixed the protrait issues within the diplomacy window having square border around the outside.

ThiccSpaget Dec 12, 2020 @ 5:10pm
what patch or whatever should I use to run this because I really dont wanna have to download each patch to test each one.

Another worthless mod cluttering up the workshop.

Grizzly  [author] Oct 15, 2017 @ 4:54am
@Nelandros - Which are you seeing with no weapons? It's most likely clashing with another mod. I would suggest turning all off except mine and see if the issue still persists. If it does, let me know.