Greenlight > Games > 00laboratories's Workshop
Greenlight is being retired. For more information on how to submit games to steam, refer to this blog post.
This item has been removed from the community because it violates Steam Community & Content Guidelines. It is only visible to you. If you believe your item has been removed by mistake, please contact Steam Support.
This item is incompatible with Greenlight. Please see the instructions page for reasons why this item might not work within Greenlight.
Current visibility: Hidden
This item will only be visible to you, admins, and anyone marked as a creator.
Current visibility: Friends-only
This item will only be visible in searches to you, your friends, and admins.
BBQ Simulator
Description Discussions0 Announcements3 Comments66 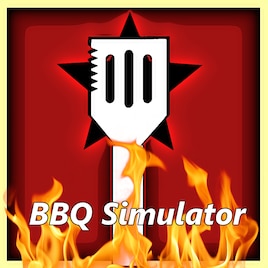 The game has been in development for over a year now and even though a lot of work has been done there are still no (finished) levels as we barely had a clue what to do with the game. Just grilling with no real purpose just feels like a waste of time at the end of the day, it may be fun at first but it just gets mind-numbing and boring after you do it twenty times.

There is also not a whole lot of room to add any game elements, you are stuck to a grill, all we can do is change up the scenery and enemies even though I wanted to make very large levels you can explore, that just doesn't work.

That and some real teamwork issues pretty much just left me to do all the work alone, I was at a point where I just wanted to throw in the towel and cancel the project. I got inspired to not give up yet by some great community members...

But I am cancelling the original concept of the game (of just grilling on a timer) to really bring you an adventure. (Edit: This plot is no longer accurate) Plot: You will find that the world you are grilling in is not all it seems, like the title suggests, a simulation. You can break out of this happy world only to realize... you are not the only one. With a portable simulator that can materialize nearly any object you will be set to escape the prison laboratory. Heck probably featuring an awesome end boss battle.

Because honestly no one wants another lame simulator game.

I must apologize that it has taken such a long time since the last announcement. Please allow me tell you more about myself and the reason for the sudden silence.

Hi my name is Henry and I am the project leader of BBQ Simulator.
I have Asperger Syndrome (Autism). It has allowed me to master slightly over 30 programming languages as I do nothing else but continue to program in my free-time since early childhood. I currently live in Germany and as required did an "Ausbildung" (you work in a company for 3 years with a little bit of school in-between to graduate a certain profession instead of a theory/school-only approach).

After we were Greenlit I officially graduated as Computer Science Expert: Software Developer. The same company offered me a job immediately and thus I moved into my first apartment with my girlfriend - all of that took much longer and more effort than expected. It's been nearly 3 months and I didn't even have a desk to put my computer on during all that time (a cheap mattress with a laptop and severe back and elbow pain had to do). But finally we are back in business!

The game development has continued, mostly in code and story as extensive 3D work was out of the question on a laptop. Player controls were improved including the ability to swim in water as well as underwater. Physical objects can float in water too. New music is in the works and all the time spent in bed with awkward positions and excruciating pain helped to create a much clearer idea of what sort of gameplay we wish to create.

Here is a screenshot of a testing area used to design a realistic sky (it moves!) and test massive bodies of water:

I decided that it would be better to be open and honest to you about the progress of the game instead of trying to hide it all under a company name. Otherwise it's impossible to engage into a proper discussion with you (the community). This is a most exciting time for me personally and I hope to create a fantastic game that will not disappoint!

A simulator game that's actually going to be fantastic.

BBQ Simulator was Initially created for the Ludum Dare 35 Game Jam and is now turning into an official game!

You can play the Game Jam version here:
http://00laboratories.com/downloads/games/bbq-simulator

[01.01.2018] We really wish to create an awesome game worth remembering. Making an entire game with several levels isn't nearly as straightforward or simple as we initially thought, it's a lot of hard work and as a small team takes a long time to complete. Please bear with us while we put in all the intricate details.

My name is Michael Nunes.
I'm a promoter of games via my youtube channel. I can help you to promote your game. No charge for this.

00laboratories  [author] Jun 8, 2016 @ 11:03pm
@PAPAI NOEL KUBARK: We are creating a massive game with a BBQ theme (similar to Unreal Gold), I will post an announcement with more details soon! As said in the description, we are showcasing what we made in under 72 hours, now we have months to expand upon the idea (this style of arcade mode will also be available with more levels). I have already pushed the release date to 2017.
< >