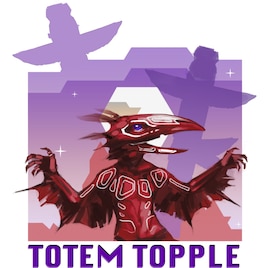 Crystalline Green Ltd.
Offline
See all 2 collections (some may be hidden)
Thanks for your support!

After the poor reception to the game's initial launch on Wii U, we identified three main issues with the game. (The story of how the game shipped and why we didn't necessarily identify those issues before release is detailed here for those interested: http://www.crystallinegreen.com/?p=1458).

The enemy hitboxes were really small, so as to stop them hitting the second-bottom totem head by mistake when coming in for an attack. However, that meant unless arrows hit the dead-centre of the enemy, they would appear to pass through, when they should have hit. Very frustrating for players and made the game look broken. We actually solved this by making the arrow hitboxes bigger.

The difficulty curve was too steep

Reviewers and players couldn't even get past the second wave of enemies on classic mode. Given the other changes made since launch, we've had to completely re-balance the game anyway, but this time with a much stronger focus of making the early phases of the game as easy as possible, then slowly adding in more challenging enemies.

Also, before, sometimes, enemies would spawn really low down, moving under the player's lowest turret and giving them no chance to defend. We've since taken this out, with all enemies spawning off the top of the screen.

The game was hard to learn

The native american theme meant that it wasn't obvious what role each totem head had. What does an Eagle or Bear even do? Whereas in say, a scifi themed game, it's a bit more obvious that the gun looking thing is probably a turret, and the thing emitting a glowing shield is probably a defensive mod. We got all the art for the game done at the start, and the artists who did it all moved on to other full time jobs, so we couldn't easily change the head designs or art style.

So instead, we made each head a different colour, added in the Help section explaining what each did, added in a tutorial section on what wings are and how they work, and generally revamped the tutorial.

Then made changes to the arrows. So if the rate of fire is higher, the arrows move faster and have speed-lines coming out the back. If the arrows do more damage, they glow brighter shades of red and eventually start spewing flames out the back. Then the player can see, "ok, if I add a turret to this head, it fires a lot faster than when I add to this head. Therefore this one must have a rate of fire bonus". That's not ideal, but it's certainly a lot better than the original Wii U version, which had none of that stuff.

Additionally, the game had a feature where, to prevent players blindly spamming the build button, when the totem pole went over a certain height, a bunch of super-hard enemies would spawn and the player was basically doomed. So the subtlety is in balancing between building too high and too low.

Literally no one got that. Way too hard to explain anyway, so we've since taken it out and simply instituted a limit on totem height. The first time you hit that limit, the game pauses and tells you.

In addition to all that, we figured there wasn't enough variety in the game. So we added damage types (ice, fire, water) and associated enemies, and giant boss enemies with different special attacks.

We also added in the ability for players to select targets to aim at, so they had a bit more direct control and ability to react, rather than the more abstract "build the right towers and hope it works out".

If people still find it's lacking depth or replayability, then we'll look at adding more features. We actually put the price up on Wii U from $3 to $5 after patching in all of the above, but mostly because Nintendo introduced a new loyalty scheme (My Nintendo) which doesn't give rewards / Gold Coins for purchases below $5. If that price proves too high, we're happy to do have another look at it, or consider sales
Read More
Description
Release date: Summer 2016
A New Dawn!
Tower defence in a single tower! Build your totem pole up and defend it against demon spirit enemies in this action packed unique twist on tower defence. Each head on your totem pole acts like a turret, wall or stats booster. Create the perfect totem pole, then defend it for as long as you can against hoardes of demon spirit enemies.

Wash0ut Jun 22, 2016 @ 8:40am
Looks like a fun little game to boot up every once and awhile, however, I'm just curious if there are gonna be more soundtracks in the game

HoneyTribeStudios Jun 19, 2016 @ 9:24am
Liking the music:) Looks like the UI has improved since I last played it too.

Details of what changed are in the announcement section: http://steamcommunity.com/sharedfiles/filedetails/updates/691517098/1466066259

Basically we took the feedback from the Wii U launch, added a bunch of features, completely rebalanced the game and revamped the tutorial and UI.

Oosk Jun 15, 2016 @ 3:02pm
I completely agree with Khell and FerrousBueller; it seems shallow but it's a good idea. There seems to be very little difference between the different segments. Unless the game is planned to be something around a dollar or two, I wouldn't buy it.

I'm impressed with this game, it does seem like an interesting take on Tower Defense, and with an ethnic theme that is rarely explored and in a way that isn't just reinforcing stereotypes. I would otherwise have been a "Yes" vote, but the Wii version has absolutely horrific reviews, all of them centered around the one thing I cannot judge from Greenlight alone - the mechanics. On that majority's opinion of the game being mechanically broken, I can't vote in favor of this unless it has had the complete reworking they all say it needed.

FerrousBueller Jun 15, 2016 @ 9:38am
Well, it looks like you put thought and effort into this. It's a unique twist on the tower defense genre. The art style is consistent and overall everything looks reasonable polished. But the gameplay looks too shallow and linear to hold my interest. Sorry.

DaveQB Jun 15, 2016 @ 5:42am
Looks like a fun little game but, while it's probably coincidental to the common inspiration, the visual style looks identical to Kalimba's, so much I first thought this was some sort of spin-off of that game.