Greenlight > Games > rgcd.co.uk's Workshop
Greenlight is being retired. For more information on how to submit games to steam, refer to this blog post.
This item has been removed from the community because it violates Steam Community & Content Guidelines. It is only visible to you. If you believe your item has been removed by mistake, please contact Steam Support.
This item is incompatible with Greenlight. Please see the instructions page for reasons why this item might not work within Greenlight.
Current visibility: Hidden
This item will only be visible to you, admins, and anyone marked as a creator.
Current visibility: Friends-only
This item will only be visible in searches to you, your friends, and admins.
Pan-Dimensional Conga Combat
Description Discussions0 Announcements2 Comments42 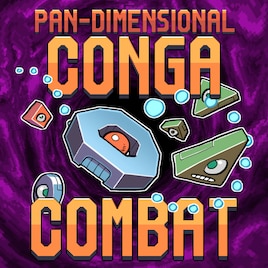 physcopanda
Offline
See the collection (may be hidden)

Surprise! :) We've added a specially compiled 8-track EP for FREE download, including the original tracks and the edited versions used in the actual game.

Grab it now from either itch[rgcddev.itch.io] or Game Jolt[gamejolt.com] and give your earholes some Conga Combat love!

In addition to this ("What?! There's more!?"), we wanted to say a big THANK YOU to those super-kind people out there who actually paid ABOVE the asking price for the game by sending them a set of two deluxe 170gsm, matte-finish A2 sized posters (42.0 x 59.4cm, 16.53 x 23.39 inches). We'll be in touch to sort out delivery soon, but more importantly we're now extending this offer for a limited time to people buying the game for $9.99 or above. (Of course, anyone who buys the game will be sent a free Steam key when/if we make it through.)

Finally, we're stuck at around 38% of the way to the top 100% and really need your help, so please, please, *please* up vote our game to help us get onto Steam and implement global high score boards!

And that's it! Happy hunting, Conganoids!

Hey there! Huge thanks for all the recent votes and comments - we're 33% of the way to the top 100 on Greenlight now, so if we can keep up the momentum then hopefully we can get Conga onto Steam really soon :) Please continue to help us with your votes and tweets (@RetroGamerCD).

In addition to this, I spent an hour or so this evening making a super-lofi "Let's Play" style video using my phone in order to help explain what Conga Combat is all about. This is in response to some of the comments and general confusion caused by the admittedly rather frenetic trailer video. It's 12 minutes long, I struggle to play whilst talking and I have a bit of a summer cold (*sniff*) -but- hopefully it answers some of the questions you may have about the game!

You can watch it HERE

Read More
Description
Release date: Mid 2016
Description
Developed in a top secret lab over the course of the past eighteen months, RGCD.DEV’s Pan-Dimensional Conga Combat is a rhythm-synchronised, old-school, score-chasing arcade game that plays like some alien coin-op from another dimension. Grab your Conganoid and join the Elder Gods in the competitive ceremonial slaughter of annoyingly happy (yet extremely deadly) geometric, pan-dimensional critters!

Conga Combat is not a typical arena-shooter. Defend yourself against the pan-dimensional 'critters' using your bullet tail, close enemy portals by looping around them and charge up your hyper-destructive mega-lazor by laying a path of bullets in front of the mindless, drifting 'purploids'. Oh, and stay the hell out of the way of the 'EVIL X' - those dudes are BAD news!

Combining trippy visual effects and coffee-break sized bytes of hardcore action, Conga Combat can be played solo in either arcade or survival mode. Arcade plays like a typical coin-op, with the player starting from the beginning each game, jumping from dimension to dimension by achieving the ever-growing kill-quota on each stage. Alternatively, the 'pure' survival mode sees the player facing an endless horde of increasingly aggressive geometric critters in a single arena for as long as they can.

Got some people over for a gaming session? We've got you covered with our old-school, timed local-multiplayer mode where you can battle your against your friends and family for high-score supremacy!

Further features that will be added to Steam version of the game if successfully Greenlit:

Get the Game Now!
The game is already complete and will be available to buy for Windows (other platforms to follow) over at Game Jolt[gamejolt.com] and itch[rgcddev.itch.io] for $4.99 on the 11th May 2016, 12:00 EST. Please note that any purchases made will be honoured with a Steam key if the game is Greenlit and released on Steam.

Recommended System Specs (Windows)
Note: the above specs are based on the oldest/worst machines that we have access to that the game still runs at 60FPS+ on. As a more simple reference, it runs at full frame rate on a Dell Inspiron M5040 laptop that I bought back in 2012 for around £300.
< >
42 Comments

Covered this in the video review above. Only thing I can add on to it is good luck on the Steam Greenlight! Had a damn fun time playing this game!

Samvega May 31, 2016 @ 4:43am
Came here from Rock Paper Shotgun. The writeup there made me want to buy your game verrry much.

rgcd.co.uk  [author] May 23, 2016 @ 1:31pm
Hello GDC, just replying to say that the art has already been been done by Folmer Kelly - that is what you are looking at in the screens & video above. The game is finished and on sale outside of steam - the only changes that will be made are the steam integration modifications :)

The GDWC May 23, 2016 @ 5:39am
This looks extremely weird. In a good way. It's also awesome to heard Folmer Kelly is making the art (Battle Golf and Wrassling are one of my favourite games on my Oneplus)

With these changes, I believe your Greenlight will be a success, and hope you'll do well with this cool-looking game idea!

Conga is out already, just not on Steam! ;)

Pan-Dimensional Conga Combat has been Greenlit and is now listed in the Steam store. For the latest information, purchase options, and discussions for Pan-Dimensional Conga Combat, please see it on the Steam Store or in the Steam Community.
Visit Store Page
For more details Visit Community Hub
For latest discussions
If you really, really want to, you can continue to the Greenlight page. Information on this page may be out of date, since all the action has moved to the areas noted above.