Greenlight > Games > napalm's Workshop
Greenlight is being retired. For more information on how to submit games to steam, refer to this blog post.
This item has been removed from the community because it violates Steam Community & Content Guidelines. It is only visible to you. If you believe your item has been removed by mistake, please contact Steam Support.
This item is incompatible with Greenlight. Please see the instructions page for reasons why this item might not work within Greenlight.
Current visibility: Hidden
This item will only be visible to you, admins, and anyone marked as a creator.
Current visibility: Friends-only
This item will only be visible in searches to you, your friends, and admins.
Syrian Warfare
Description Discussions5 Comments242 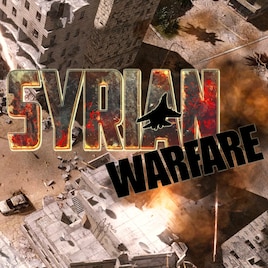 makia
Offline
See all 9 collections (some may be hidden)
Indiegogo

View Syrian Warfare in the store

Store page
Description
Release date: Autumn 2016
Our planet has seen to many wars, and that's a sensitive subject for all of us. That's the way the world wags, and every day we see consequences of numerous conflicts taking place in faraway lands. We see them in the news, we see them in the refugees at our borders.

This war has been going on for a long time, and it's hard to say when it will be over. We got so used to it that news from Syria has become trivial. We've even already forgotten how it all started, and where the roots of the terrible terror lie – the terror that swept across Europe in recent years.

Syria is all over the news, and it's become a subject of many documentaries. We, however, want to show the story through the lens of the game, and don't let the word "game" mislead you. This game does not claim to be a history lesson, but it shows the course of the war in all its seriousness through the major milestones, from the first days till the latest important victories over terror.

It's is not a cheap actioner, but rather a game claiming to look and feel like a non-fiction doc. Following the game progress will bring you to better and clearer understanding of the hornet's nest that has been stirred up in the Middle East. Understanding of how it all started and how all sides of the conflict tend to act now. We do understand the seriousness of the subject and we are not afraid to take on it.
< >
242 Comments

Sphinx Mar 3, 2017 @ 9:35am
i'm a Chinese player and I'm shocked by your game. Actually it's not a new vision for us -- most Chinese always stand with the government who tried their best to save their country, people and friends. But the game is amazing. I was so upset when the hero is down in the last chapter. I also feel the anger of those whose life and home is destroyed. I feel the will of those who tried to protect their home with their life. It's different from just watching news. ABSOLUTELY MASTERPIECE. DEEPEST MOURN FOR Александрова.

Syrian Warfare has been Greenlit and is now listed in the Steam store. For the latest information, purchase options, and discussions for Syrian Warfare, please see it on the Steam Store or in the Steam Community.
Visit Store Page
For more details Visit Community Hub
For latest discussions
If you really, really want to, you can continue to the Greenlight page. Information on this page may be out of date, since all the action has moved to the areas noted above.