Greenlight > Games > phoenix_rossy's Workshop
Greenlight is being retired. For more information on how to submit games to steam, refer to this blog post.
This item has been removed from the community because it violates Steam Community & Content Guidelines. It is only visible to you. If you believe your item has been removed by mistake, please contact Steam Support.
This item is incompatible with Greenlight. Please see the instructions page for reasons why this item might not work within Greenlight.
Current visibility: Hidden
This item will only be visible to you, admins, and anyone marked as a creator.
Current visibility: Friends-only
This item will only be visible in searches to you, your friends, and admins.
Fall of Civilization
Description Discussions1 Announcements8 Comments140 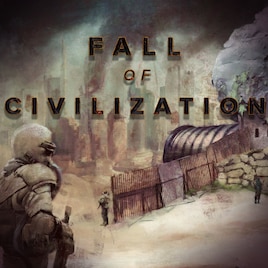 phoenix_rossy
Offline
See all 7 collections (some may be hidden)

View Fall of Civilization in the store

Thanks to everyone for their support.
Will continue to work towards release now!

Missions can be found across the map in random locations (the question mark icon).
Players move onto the same tile as the mission to activate them.

There are four types of missions (Combat, Scavenge, Rescue and Diplomatic).

Each mission tile will contain some random missions to choose from.
Quitting a mission will leave it open for another unit to try again later.

Difficulty of the mission and your units skill at missions will also be taken into account.
A random mission will be chosen and laid out infront of you for you to choose how to proceed.
*The above is just an example*
Read More
Description
Release date: Q2 2016
About the Game
You play as a survivor of the end of the world , creating your own story, controlling a faction of people you choose how you live in the new world and what the rules are.
Build up your economy and upgrade your base to draw in more survivors to your community, but beware the stronger you get the more likely other factions will start looking at you. The choices you make of who you decide to be in this new world determine how the world and its people will treat you.

Features
Fall of Civilization features turn based isometric styled gameplay, looking down at the world around you. Here are some of the key features:

Developer Note
Hey guys!
This has been my lifes blood and passion for a year now and was my final year project at Staffordshire University, studying Computer Gameplay Design & Production.
With the help of backers in my early kickstarter campaign and assets from the unreal marketplace, I have managed to create Fall of Civilization!
However If it does get greenlit I don’t plan on just stopping development, I will continue to add new features for people to try and to improve the game as a whole.
This could include but not limited to:

Fall of Civilization has been Greenlit and is now listed in the Steam store. For the latest information, purchase options, and discussions for Fall of Civilization, please see it on the Steam Store or in the Steam Community.
Visit Store Page
For more details Visit Community Hub
For latest discussions
If you really, really want to, you can continue to the Greenlight page. Information on this page may be out of date, since all the action has moved to the areas noted above.