Store Page
Arma 3>  Workshop > steffen.trombke's Workshop
This item has been removed from the community because it violates Steam Community & Content Guidelines. It is only visible to you. If you believe your item has been removed by mistake, please contact Steam Support.
This item is incompatible with Arma 3. Please see the instructions page for reasons why this item might not work within Arma 3.
Current visibility: Hidden
This item will only be visible to you, admins, and anyone marked as a creator.
Current visibility: Friends-only
This item will only be visible in searches to you, your friends, and admins. 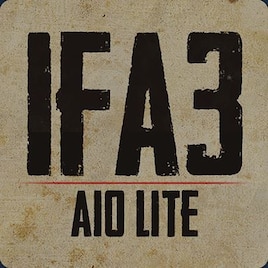 swurvin
Offline
See all 13369 collections (some may be hidden)

This item has been added to your Subscriptions. Some games will require you to relaunch them before the item will be downloaded.
Description
This project has the agreement of all involved parties:

# What is Iron Front
It is a tactical shooter video game set in World War II Eastern Front built by AWAR - a group of former OFP and Arma modders. It was released mid 2012 as a standalone game using the Real Virtuality 3 engine also powering Arma 2: Operation Arrowhead.

# What is Iron Front in Arma
Our development team has ported and upgraded the content to Arma 3 to be used in the latest RV engine. This most recent version supports many of the new technologies and features of Arma 3.

# What is the LITE version
# Why is it called Preview version
This version is work in progress until the FULL version can be delivered.

# How to participate
# Joining the team
Join our discord server[discord.gg] and we will have a chat.

“Copyright 2020 AWAR. This item is not authorized for posting on Steam, except under the Steam account named steffen.trombke”
Popular Discussions View All (142)

SLEEPYGOLDY Apr 30 @ 7:52pm
So uh where is the high quality version?

DerHerrDerLage Apr 21 @ 2:49am
Hi, I sadly can t find the Austin K5 and Crusader AA?
I hope you can help me

Jaki  [author] Apr 13 @ 6:35am
@MilesPerHour everything advertised has been either released or is yet to be released to the public - only exclusion being the campaigns and HD textures. Please read the whole mod description to understand what are are current limitations and what is to come in the future

MilesPerHour Apr 13 @ 1:00am
so you advertise all these cool things then proceed to say none of the cool things are there because you are going to (what i think) make a paid version with higher quality textures and the things you adverted? WHY EVEN BOTHER RELEASING THIS "LITE" VERSION?!?!?!?

shan Mar 27 @ 8:37am
chill guys there are like 50 people who worked hard at least be nice it probably is ARMA 3 updates just chill. there are bugs in mods sometimes and they just make mistakes for coding or something and I rate this 10/10

zakhm123 Mar 26 @ 10:48am
So for some reason using the interaction button with any automatic weapon from this mod causes it to fire instead of opening the menu, basically makes the mod unusable for me, anyone else having a similar issue?