Greenlight > Games > Infinite8's Workshop
Greenlight is being retired. For more information on how to submit games to steam, refer to this blog post.
This item has been removed from the community because it violates Steam Community & Content Guidelines. It is only visible to you. If you believe your item has been removed by mistake, please contact Steam Support.
This item is incompatible with Greenlight. Please see the instructions page for reasons why this item might not work within Greenlight.
Current visibility: Hidden
This item will only be visible to you, admins, and anyone marked as a creator.
Current visibility: Friends-only
This item will only be visible in searches to you, your friends, and admins.
Naxia
Description Discussions3 Announcements14 Comments155 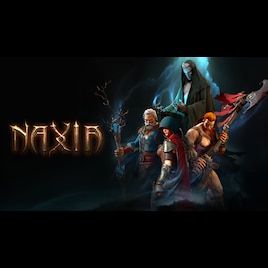 Infinite8
Offline
See all 16 collections (some may be hidden)

View Naxia in the store

Hi there,
as a bonus for DGC Games, Dubai, you can subscribe in our mailing list to receive a free steam key of Naxia.
The deal will be available just in next 24 hours.

Naxia is a arpg game with deep and wide combat system of hack-and-slash Gameplay in a new fantasy world. A world that is the new battleground of Angels and Demons. You can be either the female protagonist of the story who survived alone or be any of the three male protagonists, a Former member of the imperial mages consul, a sell sword Barbarian or a cold blood Necromancer, and develop your fighting skills beside your magic powers and ability.

While the world is changing by suspicious activities of demons and angels who are looking to capture the source of power of the earth, you are recruited by commander Skye to empower his recently formed army.

The adventure of each character is unique and specialized for him/her as they experience their own different-personal plot. The game features a unique mechanic called Rage Form that allows players to shape shift into an inhuman creature!

gojira_zilla Oct 16, 2016 @ 8:15pm
Are those placeholder graphics? Will this be improved by beta? The concept seems intresting. Going to keep an eye on this one.

Мясник Sep 22, 2016 @ 12:21am
I'm an HR Manager of the group doing the translation. I propose to translate your game to Russian language in a short time and low price. Write on e-mail mannegreim0@gmail.com or in PM

Smokagon Jun 30, 2016 @ 9:28am
This game looks awesome! I would love to talk to you about it, in case you are interested in working with me, just contact me.

Naxia has been Greenlit and is now listed in the Steam store. For the latest information, purchase options, and discussions for Naxia, please see it on the Steam Store or in the Steam Community.
Visit Store Page
For more details Visit Community Hub
For latest discussions
If you really, really want to, you can continue to the Greenlight page. Information on this page may be out of date, since all the action has moved to the areas noted above.