Greenlight > Games > Groupees's Workshop
Greenlight is being retired. For more information on how to submit games to steam, refer to this blog post.
This item has been removed from the community because it violates Steam Community & Content Guidelines. It is only visible to you. If you believe your item has been removed by mistake, please contact Steam Support.
This item is incompatible with Greenlight. Please see the instructions page for reasons why this item might not work within Greenlight.
Current visibility: Hidden
This item will only be visible to you, admins, and anyone marked as a creator.
Current visibility: Friends-only
This item will only be visible in searches to you, your friends, and admins.
Adventure Apes and the Mayan Mystery
Description Discussions4 Announcements2 Comments43 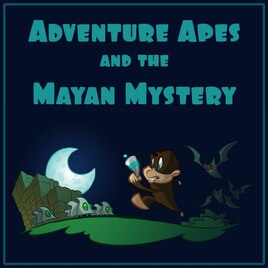 scarypotato
Online
See all 12 collections (some may be hidden)

View Adventure Apes and the Mayan Mystery in the store

So, the error message that came up with the demo (and full) version of the game has been fixed!

I haven't converted the game to Gamemaker Studio standards yet (it's an overhaul from everything from the midi files on up, yeesh!), so it'll be something that I chip away at over the next little while, but in the meantime, the demo available on itch.io should be working properly now!

I was just told about an error message that pops up if you press the Enter key at the last line of text in Dr.A's control tutorial in the game's beginning.

The game was created/compiled in GameMaker8.1, which is no longer supported, so before I can fix the minor text message issue, I'm going to have to update/convert large portions of the game to work with GM:S requirements. A major pain in everyone's butts, but I'm working my way through it right now!

If you haven't already played the game, there is a free demo that's available over at itch.io!
You'll be able to play through the first few bosses and get a feel for what the Mayan Mystery is all about, but a quick summary is this: Metroid with monkeys.

Anyhow, if you loved the original Metroid as much as I do, I hope you'll click the link below and give it a try :)

Read More
Description
Release date: Available now on itch.io
INTRO
Your goal is to hunt down Horatio Hawk and retrieve the magical item he stole from the Mayan temple. The action is fast, and the levels are huge! If you can find your way through each labyrinth, you will face your biggest challenge by far: defeating Horatio!

scarypotato  [author] Jul 13, 2016 @ 10:23pm
JK - Yeah, I'm not sure what happened with that. The page is live, but the game isn't scheduled to be released until July 15th, so there are a couple more days before it becomes active.

TenDot11 Jul 12, 2016 @ 10:39pm
Hey scarypotato, you are aware that the purchase option is still disabled right? Also the community hub is disabled.

scarypotato  [author] Jun 27, 2016 @ 7:17pm
Sorry for taking so long to answer, the game should be ready to go in the next few weeks! Been busy trying to get things updated and set up :)

scarypotato  [author] Apr 22, 2016 @ 8:13am
Thank everyone for their votes and comments. It's super exciting to see the support for my game!

Adventure Apes and the Mayan Mystery has been Greenlit and is now listed in the Steam store. For the latest information, purchase options, and discussions for Adventure Apes and the Mayan Mystery, please see it on the Steam Store or in the Steam Community.
Visit Store Page
For more details Visit Community Hub
For latest discussions
If you really, really want to, you can continue to the Greenlight page. Information on this page may be out of date, since all the action has moved to the areas noted above.