Greenlight > Games > Jonas Kyratzes's Workshop
Greenlight is being retired. For more information on how to submit games to steam, refer to this blog post.
This item has been removed from the community because it violates Steam Community & Content Guidelines. It is only visible to you. If you believe your item has been removed by mistake, please contact Steam Support.
This item is incompatible with Greenlight. Please see the instructions page for reasons why this item might not work within Greenlight.
Current visibility: Hidden
This item will only be visible to you, admins, and anyone marked as a creator.
Current visibility: Friends-only
This item will only be visible in searches to you, your friends, and admins.
The Council of Crows
Description Discussions0 Comments56 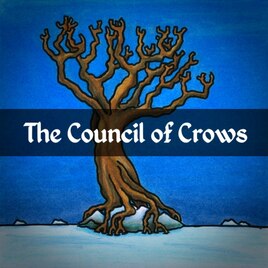 Jonas Kyratzes
Offline
See all 7 collections (some may be hidden)
Description
Release date: 2016
The Basics
The Council of Crows is the seventh game set in the Lands of Dream[www.landsofdream.net], following in the footsteps of The Sea Will Claim Everything. It's a classic point & click adventure with a strong emphasis on storytelling and exploration.

The Council of Crows tells the story of a little boy who got lost in a mysterious snowstorm and suddenly found himself in a strange place called Hyperborea, in the far north of the Lands of Dream. Taken in by the villagers of Fifth Pumpkin, he begins to explore the snowy plains, frozen forests, and majestic mountains of Hyperborea - but it would appear that only the Council of Crows, the secretive and suspicious governing body of the Corvidae, knows the way back. What will they demand in exchange for this information?

The Lands of Dream are labour of love that's been going on for almost a decade. These are unusual games: slow, heavy on text, low on puzzles, profoundly serious, utterly silly. They draw inspiration from a huge variety of sources, ranging from daft old shareware games to the short stories of Lord Dunsany and H.P. Lovecraft to the poetry of William Blake. They're definitely not for everyone, but that's all right, you know?

The Council of Crows is the result of a crowdfunding campaign for a game that was initially called Ithaka of the Clouds. The ideas grew and evolved so much as we worked on them that they were split into two very different games, with backers eventually getting both.

Features & Gameplay
Unlike in The Sea Will Claim Everything, in The Council of Crows you will be exploring a single cohesive area, namely the cold northern land of Hyperborea, with the quaint little village of Fifth Pumpkin acting as your hub. There's lots to do: people to help, places to discover, strange quests to undertake. You may end up going on some entirely unexpected journeys.

Quite a lot of the game is open: you can do things in more than one order, sometimes even solve problems in more than one way. The Lands of Dream games have always been famous for how detailed they are (every book, every mushroom, every tiny thing has its own unique description); this tradition continues in The Council of Crows, and is extended to the characters. Since this time you'll be spending so much time in one place, the people of the town will also have a lot more to say to you as the days pass.

The Lands of Dream may not be your home, but we hope you'll come to think fondly of Hyperborea and its people.
< >
56 Comments

Thesemar Jun 6, 2021 @ 3:13pm
So looking forward to this! I'm glad to know that it's been moving forward over the last few years. I've been happy to wait patiently, I know anything you put out will be deep and incredible. I grow with each creation you release to the world, changing how I see and proceed. Thank you both so much for your continued dedication and beautiful works of art. They are masterpieces.