Greenlight > Games > Culture Select's Workshop
Greenlight is being retired. For more information on how to submit games to steam, refer to this blog post.
This item has been removed from the community because it violates Steam Community & Content Guidelines. It is only visible to you. If you believe your item has been removed by mistake, please contact Steam Support.
This item is incompatible with Greenlight. Please see the instructions page for reasons why this item might not work within Greenlight.
Current visibility: Hidden
This item will only be visible to you, admins, and anyone marked as a creator.
Current visibility: Friends-only
This item will only be visible in searches to you, your friends, and admins.
One Small Fire At A Time
Description Discussions3 Announcements4 Comments82 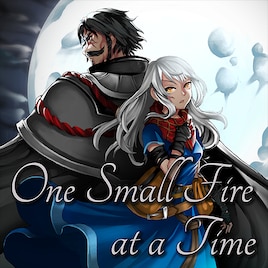 Culture Select
Offline
See all 18 collections (some may be hidden)

View One Small Fire At A Time in the store

Hello everyone! Thanks to your support during Greenlight, One Small Fire at a Time is now available on Steam! The store page is located here: http://store.steampowered.com/app/476410. Until June 17th, enjoy a 15% discount as part of our release week celebration!

Thanks to our wonderful friends over at Kidalang, and a friend on our alpha-testing team, we have been able to provide a full video of the first chapter.

It hasn't fully gone through our quality assurance yet, but this is a great insight towards the gameplay of the entire first chapter! We hope everyone enjoys it!

We still need help getting greenlit, share the greenlight with everyone you know!

Read More
Description
Release date: Q2 2016
In Overture, magic can cure all diseases, but not that of the mind. Society looks down on those whose illness is incurable by magic, and lunatics must stay in madhouses until they recover their sanity—if they ever do. But no one has worse madness than 13-year-old Janis—not even those who long for death, or live in constant fear, or see and hear the unreal—because in a city where everyone can use magic, Janis alone can’t. “Magic Deficiency Disorder,” they call it.

Her disability makes Janis an easy target for bullying, but she still fights back despite always losing. One day, she is saved from the bullies by Aidan Woolf, a powerful mage and police commander. In Woolf, Janis finds a father figure, but the commander didn’t come to her madhouse just for a visit. He has a mission.

You can find An Octave Higher here:
http://store.steampowered.com/app/352780/
Popular Discussions View All (3)

What way do you want to play One Small Fire at a Time?
Culture Select

Culture Select  [author] Apr 9, 2016 @ 8:49pm
Thank you for your support Rose, Invisigoth, and everyone! We'll be there soon! Please share this greenlight with your friends and ask them to vote too! It really only takes a few dozen votes to make a real difference.

With the help of the community, we can bring One Small Fire at a Time to Steam - but only if we do it together! Ask your Steam friends to up-vote if you want to play this game!

One Small Fire At A Time has been Greenlit and is now listed in the Steam store. For the latest information, purchase options, and discussions for One Small Fire At A Time, please see it on the Steam Store or in the Steam Community.
Visit Store Page
For more details Visit Community Hub
For latest discussions
If you really, really want to, you can continue to the Greenlight page. Information on this page may be out of date, since all the action has moved to the areas noted above.