Greenlight > Games > Corrupt Cup Contest's Workshop
Greenlight is being retired. For more information on how to submit games to steam, refer to this blog post.
This item has been removed from the community because it violates Steam Community & Content Guidelines. It is only visible to you. If you believe your item has been removed by mistake, please contact Steam Support.
This item is incompatible with Greenlight. Please see the instructions page for reasons why this item might not work within Greenlight.
Current visibility: Hidden
This item will only be visible to you, admins, and anyone marked as a creator.
Current visibility: Friends-only
This item will only be visible in searches to you, your friends, and admins.
Corrupt Cup Contest!
Description Discussions0 Announcements3 Comments55 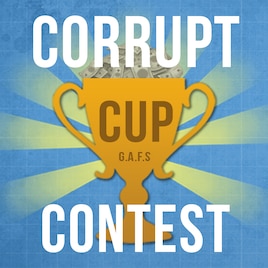 Really excited to say we're officially Greenlit! It took a little while but really happy that the game will get a full Steam release.

I want to thank all of you for your votes, shares and promotion. I am making good progress with the game and hope the wait won't be too long!

PC Gamer have covered the game! Delighted to be in one of my favourite sites!

Should really help us on our way. Share the story with your friends!

Read More
Description
Release date: Q2 2016
Corrupt Cup Contest, the game that tasks you to win “The Global Sports Tournament” by any means! Do whatever deals, tricks and backstabbing you need, to take the tournament back to your country!

Corrupt Cup Contest is a tongue-in-cheek strategy game, inspired by the corruption scandals that occurred at FIFA, the IAAF, and other historical corruption scandals. Corrupt Cup Contest tasks players to financially outbid and politically outmaneuver their opponents in order to win the right to host the premier international sports tournament from GAFS (Global Association For Sport) - The Global Sports Tournament. Over multiple tournaments, players must accrue the most tournaments to be declared the most influential GAFS delegate!

Players need favour from fellow delegates from countries around the world. How you accrue that favour is up to you! You can play honestly by convincing delegates with fine dining, PR campaigns and even having delegates visit your country, or you accrue the same interest much more cheaply by being corrupt and directly bribing delegates with mansions, watches or a lovely holiday home! The game asks you to strategize your management of a limited campaign budget and manage your “heat” to ensure the media don’t take too much of an interest in any potential dodgy doings.

While managing all this, you’ll have to manage other players who want to trip you up! If you see a player running ahead, why not accuse them of something dodgy and see whether the media will bite? Or start forming unofficial alliances between you and other nations, and strategize to take another player together? Of course your “friends” could at any point jump ship, betray you, or have been misinforming you all along!

Corrupt Cup Contest is scheduled for an early access release within Q2 of 2016, and is created by independent developer Good Sport Games Limited.

A unique gameplay experience every time!

The game world will randomly change with exchange rates rising and falling, media scrutiny varying from round to round and random in game events causing players to have change, adapt and restrategise at a moment’s notice.

Players only know a limited amount such as votes they’ve secured from fellow countries which makes what you know valuable and tradable. So use it and talk to other players to attempt to wrangle the information you need from one another so you can plan your next steps.

You just have to be popular enough...

Voting countries will vote for their favourite, but to win a round, a player has to have a clear majority of votes. Votes are completed in rounds and if a majority is not reached, the player with the lowest amount of votes is removed and those voting countries vote for their next preference in the next round. This creates value in being a country’s second preference or even third preference.
< >
55 Comments