Greenlight > Games > Fluttermind's Workshop
Greenlight is being retired. For more information on how to submit games to steam, refer to this blog post.
This item has been removed from the community because it violates Steam Community & Content Guidelines. It is only visible to you. If you believe your item has been removed by mistake, please contact Steam Support.
This item is incompatible with Greenlight. Please see the instructions page for reasons why this item might not work within Greenlight.
Current visibility: Hidden
This item will only be visible to you, admins, and anyone marked as a creator.
Current visibility: Friends-only
This item will only be visible in searches to you, your friends, and admins.
Spellrazor
Description Discussions0 Announcements1 Comments40 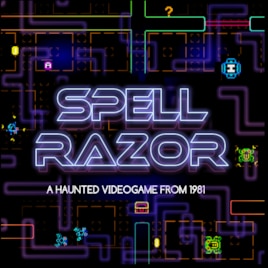 If you want to play the current build it is available for free at one of these sites:
http://dene.itch.io/Spellrazor
http://gamejolt.com/games/spellrazor/123648

I'm quite open to feedback and suggestions, so please feel free to let me know what you think.

Read More
Description
Release date: Early 2016
Spellrazor is an '80s retro-style, glitchy, neon-tinged arcade-adventure-shooter in the style of Rogue, Defender, Robotron and Berserk. It is a love-letter to the early, sinister work of Williams and Eugene Jarvis... and a ghost story.

Enter the Electric Dungeon, destroy enemies using the 27 spells at your disposal and dive to the next level. Hack and glitch the game to find out what happened to the original author before he disappeared back in 1981. Not all is as it appears.

GAMEPLAY
Spellrazor is played in realtime using the cursors and all 26 letter keys, as well as space.
In order to make this strange array of weapons usable, the game goes into 'slowmo' mode when a threat is detected. This gives you valuable breathing room to choose the appropriate key/spell, dodge, or flee.

Alternatively, you can play in 'Insane' mode which leaves the experience 100% realtime.

THE CONSOLE
Spellrazor comes with its own debug console. This is the means by which you can hack the game, and also learn a little more about the game's original author, Duncan Bower, who went missing in the early '80s.

The console allows you to buy and sell spells, cheat and 'fix' other elements of the game.
It's also full of secrets.

Fluttermind  [author] May 16, 2016 @ 10:19pm
"The thing I love is the fact that it gives me nausea and headaches, the symptoms the person in the game had, and it makes me feel like I am actually in the game!" There's a reason for this...

.iG TheVanillaMiner Apr 23, 2016 @ 6:25pm
Love the game, I've played it for about a half hour. The only thing I don't really like about it is that the audio is way too loud and makes Let's Plays way too challenging. The thing I love is the fact that it gives me nausea and headaches, the symptoms the person in the game had, and it makes me feel like I am actually in the game!

Fluttermind  [author] Apr 13, 2016 @ 4:16pm
Thanks so much, folks. It was really fun making it... bar the bit where I started looking into the occult stuff which got quite unnerving at one point.

Shitty Wizard Apr 9, 2016 @ 5:15pm
This game is Awesome, wicked back story to the development and the game is so interestingly delivered, this is a drug in data form.

stilvoid Mar 31, 2016 @ 7:09am
Like this a lot. I fired the game up last night and lost a couple of hours to it before I even realised I'd properly started playing. I'm a big fan of Löve too so it was great to be able to have a poke around under the hood :)