Greenlight > Games > yyr's Workshop
Greenlight is being retired. For more information on how to submit games to steam, refer to this blog post.
This item has been removed from the community because it violates Steam Community & Content Guidelines. It is only visible to you. If you believe your item has been removed by mistake, please contact Steam Support.
This item is incompatible with Greenlight. Please see the instructions page for reasons why this item might not work within Greenlight.
Current visibility: Hidden
This item will only be visible to you, admins, and anyone marked as a creator.
Current visibility: Friends-only
This item will only be visible in searches to you, your friends, and admins.
Multitasking
Description Discussions0 Comments60 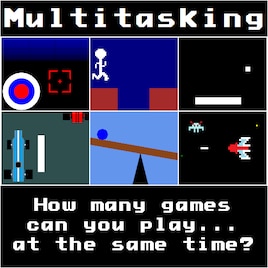 yyr
Offline
See all 4 collections (some may be hidden)

View Multitasking in the store

Store page
Description
Release date: 2016
How many minigames can you play at once? Perhaps two? Maybe three? What about four? How long can you last against an increasingly difficult onslaught of continuously-shuffling minigames? All of the gaming skills you've built up over the years will be tested in this unique, thrilling new experience!

It starts easy, sure. One game at a time. Each minigame is super-simple, involving just one single task. Hit the paddle with the ball, avoid the other cars, fire at the right time to blast the aliens...for about 8-10 seconds, then it disappears. But soon enough, a second game will begin before one is finished. No problem, just play them both! Soon after that, you're always playing two simultaneous games. Then, a third one begins before those two finish...

Multitasking's patent-pending design enables up to 4 games to be played at once, using the entire Xbox 360 Controller! The buttons and triggers along the top of the controller control the game along the top of the screen. The left and right thumbsticks control games on the left and right sides, and the face buttons control games in the center! The 13 unique minigames are always shuffling, so the experience is different every time! Don't have an Xbox 360 Controller? That's OK…the Steam version adds keyboard controls! They're not merely tacked-on, they've been refined to give you the full experience!

How long can you last? Make a single mistake, and you're out! Pass the controller and see who can last the longest, or practice hard to head to the top of the Leaderboards! Freely-adjustable difficulty settings allow anyone to try, regardless of their skill level, so everyone can join the insanity! And, elite gamers can attempt to complete a fiendishly-difficult set of Achievements!

Multitasking also offers 30 unique Challenges, offering scripted minigame combinations to complete. They start easy, but get insanely difficult! Will you have the skills to complete them all? Or, perhaps you'd like to try some of your own combinations, or set up devious challenges for your friends? Practice Mode gives you full control! You can assign individual minigames of your choice to each slot, adjust their duration and difficulty, and give it a shot!

Multitasking will push you to your limits as a gamer, make your next party memorable, and provide hours of unique thrills! Want to try it for yourself? Please vote YES!

I created Multitasking because I wasn't sure if it would be fun or not. As it turns out, it is indeed fun...but it's a whole lot tougher than I thought it would be! It is also fascinating, on multiple levels. It is fun to watch as well as to play. Because we all multitask differently, each player's experience with it is unique to that player.

At the conventions I've attended over the years, many folks have asked for PC versions of the arcade-style games I've produced for XBLIG. Up until now, my answer for them has been "maybe in the future," but I've given them nothing…until now!

I feel that Multitasking is a fantastic place to begin this endeavor. It's easily the most unique, original concept I've ever created, and it contains the same signature arcade-style action featured in my other efforts.

I grew up with arcade games. Years later, arcade-style games remain my favorite games to both play and create. Narrative is optional; gameplay is everything to me. I encourage you to visit www.yyrgames.com for more information on my titles. I create all of these games in my spare time, by myself, with no budget…but I only release games that meet my high standards for intense, challenging, and addictive arcade-style gameplay. If you love arcade games the way I do, please vote YES! I would love to bring both my existing catalog and future titles to Steam!
< >
60 Comments

yyr  [author] Jun 20, 2016 @ 12:48pm
If you're in the Philadelphia area this weekend (June 24-26), be sure to stop by the TooManyGames convention! I'll be there, with the latest build of Multitasking! I've added three of the new minigames already, and am currently working on the Steam version in earnest =)

yyr  [author] Mar 17, 2016 @ 3:03pm
Multitasking has been Greenlit! I just wanted to take a moment to thank everyone for their support. Please continue to post suggestions...I will read them all and take them into account!

I don't want to make promises--because being a solo developer is hard!--but I hope to release the game this year. I won't release it before it's ready, though, or before I've included everything I promised in the trailer!

Thanks once again, and please look forward to Multitasking! You can always find the latest information on my work at my Web site, www.yyrgames.com =)

Owl Licks Feb 29, 2016 @ 12:25pm
I got to play this at MAGFest and made the Normal mode leaderboard. I'd love to see this game and mulit-player snake make their way onto Steam.

yyr  [author] Feb 23, 2016 @ 3:36pm
Thanks all for the positive comments =)
I really enjoyed showing at MAGFest...it was my pleasure to present Multitasking and Snake Party, and I'm glad you all like it as much as I do =)
itatton: I will now plan to include a colorblind mode in the final version, which would also have higher contrast in some other minigames as well. Thanks for the suggestion! I want as many people to enjoy this as possible!
TylerM: Yes, difficulty does increase as you play! Also, I do have some competition-minded features planned. First and foremost are Steam Leaderboards, but I would also like to include a "tournament" mode that allows multiple players (one at a time) to play the same exact sequence, so everyone is on equal ground =)

DasKreestof Feb 22, 2016 @ 10:45am
This original game creates a unique challenge for the brain. I would definitely buy this, play this, and probably suck at this.

itatton Feb 21, 2016 @ 9:27pm
This was my favorite game from the MAGFest indie arcade this year. I'm hoping a colorblind mode is added from some difficulty I had as a strong deuteron with the ABXY clearing mini game? That's the only thing change I want. Everything else was perfect as is.

Multitasking has been Greenlit and is now listed in the Steam store. For the latest information, purchase options, and discussions for Multitasking, please see it on the Steam Store or in the Steam Community.
Visit Store Page
For more details Visit Community Hub
For latest discussions
If you really, really want to, you can continue to the Greenlight page. Information on this page may be out of date, since all the action has moved to the areas noted above.