Greenlight > Games > Mighty Box's Workshop
Greenlight is being retired. For more information on how to submit games to steam, refer to this blog post.
This item has been removed from the community because it violates Steam Community & Content Guidelines. It is only visible to you. If you believe your item has been removed by mistake, please contact Steam Support.
This item is incompatible with Greenlight. Please see the instructions page for reasons why this item might not work within Greenlight.
Current visibility: Hidden
This item will only be visible to you, admins, and anyone marked as a creator.
Current visibility: Friends-only
This item will only be visible in searches to you, your friends, and admins.
Posthuman: Sanctuary
Description Discussions3 Announcements2 Comments69 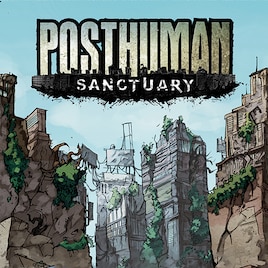 Mighty Box
Offline
See all 12 collections (some may be hidden)

View Posthuman: Sanctuary in the store

HURRAH! Greenlit! We just wanted to say a massive thank you for all your support. This campaign is a proper rollercoaster, and the words of encouragement we've been getting on Greenlight from day one have been keeping us going. We'll keep you posted on what happens next - but for now, here's a toast to all you guys! Cheers!

Greetings from the mutant apocalypse!
We have added another video showing the gameplay in detail, explained by our own Game Designer, and Mutant Sympathiser, Gordon Calleja. If you were waiting for more info to give Posthuman: Sanctuary the thumbs up, then this is your chance :) Hope you enjoy it and that you like the game.

Read More
Description
Release date: 2018
A bitter-tasting rain washes over the raw wreckage of human civilization. With only a heavy pipe to defend you, you forge out of your threadbare shelter, desperate for food. At first, you think you must be imagining the strains of an old favorite song rising above the sound of wind and leaves, but you follow the pounding heartbeat of familiar music until you’re sure you’re not dreaming. It leads you to a threadbare house lying among the trees. The curtains are drawn, but there’s light inside. The front door is ajar.

Inside a figure in a brittle, wrinkled suit sits on a sofa, listening to a record deck. You haven’t seen another living thing in so very long.

Only when she turns slowly to face you do you notice that her head is much too large, grotesquely misshapen. Your hand tightens on the pipe.

You need to decide what to do. And the others are watching.

Posthuman: Sanctuary is a new digital game for Windows, OSX and Linux about surviving the end of the world -- and keeping your humanity. It’s part rogue-lite, with combat, team management and exploration elements, and part interactive fiction, where the choices you make will weigh on your chances and shape your experience.

It’s a digital take on last-year’s successful Posthuman board game - "one of my top 10 for the year!", according to those fine folks over at Boardgame Corner[http//%26quot%3Bhttps]! We’ve worked diligently to adapt some of the things you love most about turn-based board gaming into an all-new single-player, narrative-led video game experience that anyone can enjoy. It’s designed to challenge you, scare you -- and even weigh on your conscience.

You are a survivor in a near-future Europe that has collapsed under the weight of its own political errors, in the chilling wake of a bloody class war fueled by genetic modifications and radical technology. If you can only reach the sanctuary of the Fortress, you may learn more -- and ensure your own survival. But to forge across a crumbled land where resources are spare and mutants roam the ruined mansions and markets alike, you’ll need a team behind you.

You start Posthuman: Sanctuary with only one follower, and more join along the way. It’s up to you to keep them together and ensure their survival -- and get them to help you ensure yours. Each has their own complex blend of traits: Some are violent, others humane; some are adventurous, others fearful. Your choices in the situations you encounter will affect their morale, their loyalty and more.

Carefully balancing risk and reward, you and your team quest into the unknown, gradually unveiling a map of terrain and encounters that you shape to your liking every time you play. In classic turn-based encounters, aggressors who’ve lost their humanity to mutations -- or who’ve lost their good sense to the terror -- will challenge you to make the most of your group’s skills and to use your best judgment about their safety.

And you’re in danger, too -- some wounds might cause you to take on mutations of your own. If you mutate, your followers may begin to fear and distrust you, but the world of Posthuman: Sanctuary just might offer you paths and powers that just aren’t available to mere humans.

The key to Posthuman: Sanctuary is a world of interconnecting, data-driven systems and possibilities. This “pilot” episode of what we hope will become an ongoing series takes only a few hours to complete once, but no single path through the game will ever be the same. With over one hundred narrative encounters and a rich network of weather, health, location and other conditions affecting them, Posthuman: Sanctuary exists to be discovered and rediscovered. And just when you think you know it all, more mysteries rustle in the shadows at the world’s edges.

High-quality art and music will help bring this immersive experience to life. We’re fortunate to have Italian comic book artist and illustrator Arjuna Susini (Mistry, P.I., Bullet Ballad) on board again as Senior Artist to create vivid, cool graphic novel-style panels of some of Posthuman: Sanctuary’s key narrative encounters. Arjuna was responsible for the incredible box art and principal character designs for the Posthuman board game -- now, with his style and Mark Casha's art direction, the digital game’s visuals will be key to an arresting, emotional experience.

On the music side, we're absolutely thrilled to be teaming up with Danish electronic music legend Trentemøller! The game will feature the music of Trentemøller in the form of in-game tracks you’ll discover on your journeys to the Fortress. The game’s own original soundtrack will be developed by our own in-house musician Thom Cuschieri.

We’re Mighty Box, a small team based in Malta. It’s a small island, but we have a thriving independent game scene here, and we’re honored to have this chance to share some of our work and spirit with the wider world. We started out as five friends working together in our spare time -- that’s how we developed Will Love Tear Us Apart? a non-commercial adaptation of Joy Division’s song “Love Will Tear Us Apart”. It earned three international nominations (including a SXSW Interactive Award!), and got a shout-out in Rolling Stone!

We knew we liked to make games about difficult human experiences and choices in time of stress, and the success of Will Love Tear Us Apart gave us the morale boost to found our own studio together. We’re avid board gamers, and we teamed up with Mr. B Games to fund and create the Posthuman universe for the tabletop world. Thanks to our backers, the board game has been a huge success -- and has even expanded into something larger than we could have dreamed. Now, we want to bring a digital adaptation to life.

The game design and the bulk of the writing is being handled by Gordon Calleja, who is both a game designer and game researcher and divides his time between Mighty Box and the Institute of Digital Games at the University of Malta.

The lead developer and project manager is Marvin Zammit, managing director of Mighty Box and our in-house physicist and Rush fan. Coding duties are divided between him and Gary Hili, a battle-scarred code guru and recent graduate of an MA in Digital Games.

Arjuna Susini is Lead Illustrator on the project (more about him above), working under the watchful eye of Mark Casha, Mighty Box's Art Director. All 3D work, animation and additional art is being handled by Fabrizio Calì, our very own Blender master and resident technical artist.

The game soundscapes and SFX are being developed by Thom Cuschieri, in-house tune & pun peddler.
Popular Discussions View All (3)

therealjohnconnor Mar 19, 2016 @ 5:36pm
Not just the bog-standard zombie/post-ap survival game then. The mechanics intrigue me, so I'd probably get this if it was ever made.

Posthuman: Sanctuary has been Greenlit and is now listed in the Steam store. For the latest information, purchase options, and discussions for Posthuman: Sanctuary, please see it on the Steam Store or in the Steam Community.
Visit Store Page
For more details Visit Community Hub
For latest discussions
If you really, really want to, you can continue to the Greenlight page. Information on this page may be out of date, since all the action has moved to the areas noted above.