Greenlight > Games > Fuero Games's Workshop
Greenlight is being retired. For more information on how to submit games to steam, refer to this blog post.
This item has been removed from the community because it violates Steam Community & Content Guidelines. It is only visible to you. If you believe your item has been removed by mistake, please contact Steam Support.
This item is incompatible with Greenlight. Please see the instructions page for reasons why this item might not work within Greenlight.
Current visibility: Hidden
This item will only be visible to you, admins, and anyone marked as a creator.
Current visibility: Friends-only
This item will only be visible in searches to you, your friends, and admins.
Age of Cavemen
Description Discussions0 Announcements1 Comments57 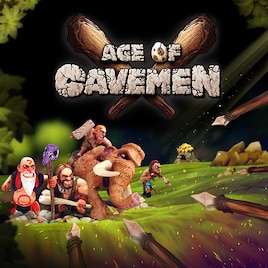 Fuero Games
Offline
See all 5 collections (some may be hidden)

View Age of Cavemen in the store

We are on our way to top 100 games on Greenlight!
Help us achieve our goal and ask your friends for votes on Age of Cavemen!
CLICK HERE TO TELL YOUR FRIENDS[www.facebook.com]
Read More
Description
Release date: Q1 2016

Build a strong and prosperous village, which will not only survive the attacks of the enemy tribes, but also be able to produce a huge army! Train the strength warriors, tame the amazing and dangerous dinosaurs and lead them to victory in the battle! Explore the prehistoric world with your friends, create the strong clans and conquer the world!

Age of Cavemen is a free to play multiplayer game. Thanks to the cross-platform technology Fuero Games has developed, the game allows people use different kind of devices to play together! You don’t have to face choices like on which platform you should start your adventure with Age of Cavemen. You can play on your PC or Mac and later re-login to the game on your mobile device! Now you can play the game anywhere, anytime and it’s only up to you what kind of device will you use to control your village!

These words describe perfectly how does cavemen life looked like everyday. Thanks to the alliance system you don’t have to be alone in this wild world! Hunt your enemies and plunder their villages. In the face of danger your allies may help you to defend your village with their forces.
All of these presented in beautiful, cartoon graphics which creates the unique feeling of the game.

"Love it! Game is great so far. Great graphics, good battle gameplay and good upgrade times. I'll be spending some time on this one for sure!"
"The game looks great and has lots of potential"
"Super-Duper Game"
"Wow! Strategy must have"
"I love it! Addictive"

Age of Cavemen has been Greenlit and is now listed in the Steam store. For the latest information, purchase options, and discussions for Age of Cavemen, please see it on the Steam Store or in the Steam Community.
Visit Store Page
For more details Visit Community Hub
For latest discussions
If you really, really want to, you can continue to the Greenlight page. Information on this page may be out of date, since all the action has moved to the areas noted above.