Greenlight > Games > Nectar Game Studios's Workshop
Greenlight is being retired. For more information on how to submit games to steam, refer to this blog post.
This item has been removed from the community because it violates Steam Community & Content Guidelines. It is only visible to you. If you believe your item has been removed by mistake, please contact Steam Support.
This item is incompatible with Greenlight. Please see the instructions page for reasons why this item might not work within Greenlight.
Current visibility: Hidden
This item will only be visible to you, admins, and anyone marked as a creator.
Current visibility: Friends-only
This item will only be visible in searches to you, your friends, and admins.
Project Resurgence
Description Discussions0 Announcements1 Comments237 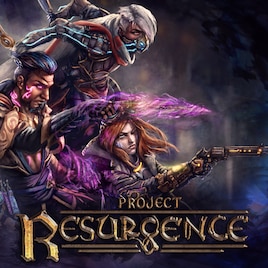 We're 80% towards reaching our Kickstarter goal with only 7 days left to get there! If you're interested in our game, please Back us on Kickstarter and help spread the word!

It's coming down to the wire, and we need all the support we can get. Thanks so much for you support!

Project Resurgence is a narrative-driven roleplaying game set in the land of Lumen, a gritty and volatile world being rebuilt after a great disaster. In this mysterious environment, there are no right or wrong answers—only actions and consequences. To discover the secrets of this world, you must first uncover your own veiled past, by any means you see fit. As you fight, sneak, or persuade your way toward the truth, one question constantly hangs: will you bring order or let chaos reign? If you can navigate the myriad terrors both monstrous and human, then maybe—just maybe—history will remember your name.

Features
Gameplay
Story
Long ago, a deadly black Mist spread over the world of Lumen and forced the people to flee underground. They split into five tribes, and lived independently until the Mist began to recede over a thousand years ago. Upon returning to the surface, they found the land blackened and scarred, littered with towering spikes of black onyx and pools of luminous liquid. Slowly, life returned to the land, as it always does. The entirety of the known world consists of the southeastern tip of a large continent, and the five islands off its coast. Everything else is still shrouded in Mist. The grand capital of Dehrgada City has been built on the mainland, combing the culture and aesthetics of all 5 tribes.

Five Tribes
Ragnar - Gifted hunters and woodlanders, the Ragnar are the tribe most connected to the natural world. Focusing more on the primal aspects of the human body, such as melee weapons, nature skills, and simple equipment, the Ragnar excel in disciplines that others would call basic.

Baric - Renowned for their ingenuity and infamous for their cunning, the Barics have a checkered history with the other tribes of Lumen. Gifted with unstoppable minds and an unquenchable thirst for knowledge, the Barics emerged from the underground and saw the world as a prize for the taking.

Selysian - The most reclusive of the five tribes, the ways of the Selysians have always been shrouded in mystery. The first to discover the supernatural properties of the abundant ambrosia crystals found in their mountain home, the Selysians found that with intense discipline and training they were able to harness the energies of the crystals with their own minds.

Dresdi - Shrewd and industrious, the Dresdi are a mostly nomadic people, often living in small caravans that travel across their island from oasis to oasis. Due to the harshness of their home environment, the Dresdi strive for mastery in a variety of skillsets, namely anything that improves their ability to survive.

Ashurad - Gifted, versatile, and resilient, the history of the Ashurad has been one of calamity and loss. Their origins have been lost, both due to the passage of time as well as subjugation by the Barics, leaving them a people now fractured in mind and spirit.
< >
237 Comments

Zitokai Jun 21, 2017 @ 2:03am
Project Resurgence isn't necessarily dead. The latest unofficial update is that the development of the game has been put on hold, due to insufficient financial resources. This is very unfortunate, since great progress has been made on the title. Currently, Nectar Game Studios is trying to find a solution to the current situation. They are even looking for other potential game developer studios to get the IP (Intellectual Property) and have the game published that way.

Twisted Jun 20, 2017 @ 11:50am
Game is dead and you aint getting your money back, unfortunate but that's how it goes with these tiny indie dev studios sometimes.

i watched cohcarnage on twitch and that was enough for me to join the kickstarter and pay 200+ dollar just to have fun with alpha testing... and i dont care if i have to wait 1 or 2 years ... as long as the endresult is as awesome as cohcarnage's game streams.

Zoron Mar 8, 2016 @ 5:33pm
I didnt notice first but if it isnt coming out for another year it should have been in concepts first. a few months sure thats ok but a whole year, unless its doing an early access thing thats a ridiculous time for a greenlight game to wait to be finished after getting greenlit. Thats like that bs Realms of the Flesh being greenlit and they are barely even in alpha.