Greenlight > Games > Dreadlocks Ltd's Workshop
Greenlight is being retired. For more information on how to submit games to steam, refer to this blog post.
This item has been removed from the community because it violates Steam Community & Content Guidelines. It is only visible to you. If you believe your item has been removed by mistake, please contact Steam Support.
This item is incompatible with Greenlight. Please see the instructions page for reasons why this item might not work within Greenlight.
Current visibility: Hidden
This item will only be visible to you, admins, and anyone marked as a creator.
Current visibility: Friends-only
This item will only be visible in searches to you, your friends, and admins.
Ghost Theory
Description Discussions16 Announcements21 Comments614 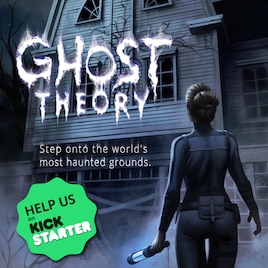 "It's when the lights go out and you feel something behind you, you hear it, you feel its breath against your ear, but when you turn around, there's nothing there..." ― Stephen King

Ghost Theory is a single-player horror adventure game focusing on stealth and exploration. Using a range of ghost hunting gadgets and abilities, you must investigate real world haunted places to reveal the truth behind their haunting, all the while evading the wrath of their resident evils ― or potentially eliminating them.

Although we fully intend to repeatedly scare the hell out of you, we are striving to design compelling gameplay, first and foremost. Freedom of exploration and player interaction are equally as vital to us as atmosphere and immersion, and represent the foundations on which our game is built.

Ghost Theory is very different from other horror games. You will not shoot zombies or aliens, run and hide from murderous psychopaths, or follow a scripted, linear path.

Instead, each location will be an open-ended haunted ground, with its own backstory for you to discover. But the more you explore and poke around, the more you risk angering the lingering spirits that roam the place.

Rather than physically try to kill you, ghosts will stalk and harass you, becoming more aggressive as you get closer to your objective. Manage your stress and find a way to banish or capture them before they literally scare you to death.

You are free to take shortcuts or take your time to discover optional areas and secrets, gather data in the form of Ectoplasm samples or possessed objects, capture footage of ghost activity, etc.

Gameplay will be varied and challenging. Even though you’re a professional ghost hunter, don’t expect to run around with a proton pack on your back, shooting wildly at everything that moves!

Instead, you must rely on stealth and observation to get by, and avoid direct contact with ghosts at all costs. Invisible and omniscient, they react to your actions and choose their moment to strike, making you feel vulnerable at all times.

However, vulnerable does not mean defenseless.

Over the course of the game, your paranormal abilities will naturally improve, and you will be able to invest in research to expand your arsenal of gadgets. But there's only so much you can carry, so you'll have to choose your loadout wisely before setting off.

The audiovisual aspect of the game is also set to receive the utmost care. Great horror obviously relies on build-up and anticipation, but also on climax: what you can’t see is terrifying, but what you do see must also be shocking and disturbing. Realism is key, and we are making sure that our environments and sound effects are as believable as possible.

To push the idea further, we don’t want our ghosts to be mere 3D models. Instead, we have been experimenting with real-life actors: captured with a stereoscopic 3D camera and using the green screen technique; they seamlessly integrate into the game and make our ghosts as expressive and spine-chilling as those of your worst nightmares!

As mentioned earlier, we’ve also been doing extensive research on real haunted places and have already gathered an impressive list of suitable locations to feature in the game. We've been in talks with owners of private properties and convinced many of them to let us recreate their house and story, making Ghost Theory that much more authentic. There will of course also be a compelling narrative tying all of these seemingly unrelated cases together.

With so much effort being put into the game’s atmosphere, we also have to make your own immersion deep and uninterrupted. To achieve this, we are tailoring the entire game's design and user interface with VR in mind. No visible UI during gameplay. No button prompts, no inventory screen. Want to use your holy water to cleanse that cursed doll? Look down at your belt, count how many vials you’ve got left, and grab one.

All of this will be enhanced by native development for VR headsets. We've been experimenting with Oculus Rift devkits for about 2 years now, and our game is built from the ground-up to take full advantage of this technology, offering much better results than games merely supporting it.

But don't worry, Ghost Theory will also be entirely playable without VR.

Our world is full of unexplained mysteries. Some people brush them off as mere coincidences or elaborate set-ups; others believe there are invisible forces constantly at play around us. Our stance is the latter, and we aim to explore these themes through the tale of Barbara, our heroine.

As a child, she experienced a traumatic paranormal encounter from which she emerged with a blessing — and a curse: the gift of Clairvoyance, granting her a window into the world of the departed.

Using her unique ability, she now leads a paranormal investigation team as part of a secret university research program. With each haunting she delves into, she gathers precious information and data, allowing her fellow scientists to reach new breakthroughs and get ever closer to solving the eternal mystery of the afterlife.

Will this game include Spanish support?
Digital_CHE

Kevin3012 Feb 21, 2021 @ 10:51pm
I was so looking forward to this game especially when I realized you get to investigate real haunted place from around the world. I believe they could make this if they started the campaign again, I would really like to see this game see the light of the day

Necrowitch Oct 21, 2018 @ 10:52am
You guys should have known! Your stupid faults for handing over your money. LOLOL

Bluetendo Sep 26, 2018 @ 1:34pm
I would like to request my money back on this. It has been over 2 years since we last received ANY news about this. Not sure how this is not considered to be cancelled or worse, a scam. I have written many times to the developers and not once have I received an email back. Please provide refund.