Greenlight > Games > For All To Play's Workshop
Greenlight is being retired. For more information on how to submit games to steam, refer to this blog post.
This item has been removed from the community because it violates Steam Community & Content Guidelines. It is only visible to you. If you believe your item has been removed by mistake, please contact Steam Support.
This item is incompatible with Greenlight. Please see the instructions page for reasons why this item might not work within Greenlight.
Current visibility: Hidden
This item will only be visible to you, admins, and anyone marked as a creator.
Current visibility: Friends-only
This item will only be visible in searches to you, your friends, and admins.
Steno Arcade
Description Discussions0 Announcements2 Comments25 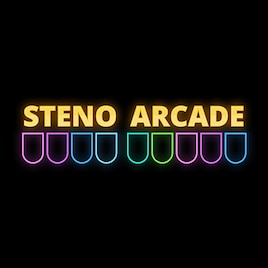 View Steno Arcade in the store

Store page
Recent Announcements View All (2)
Greenlit!
February 26, 2016 - For All To Play

Thanks to you, the Steam Community, Steno Arcade has been Greenlit! We're planning to release Steno Arcade as an Early Access title so that we can use your feedback to improve the game over the course of development. We'll have a release date soon - stay tuned!

As promised, we've added support for Mac and Linux to the latest build of the Steno Arcade alpha (1.1.5). We've also made some changes to the UI in Steno Hero. These changes are intended to simplify the UI and provide more feedback to the player:

Download the new Steno Arcade alpha for Windows, Mac, and Linux now![foralltoplay.com]
Read More
Description
Release date: Q2 2016
Steno Arcade is a suite of four arcade games designed to teach and drill steno and keyboarding fundamentals in an immersive, addictive, responsive, and interactive way. Steno Arcade is 100% free and open source and works with any steno machine or keyboard.

The alpha build of Steno Arcade includes one of the four games in the suite, Steno Hero! Imagine your favorite rhythm games, but instead of pressing buttons that vaguely emulate the original instruments, you're hitting steno chords or keyboard keys to precisely and accurately produce the lyrics to your favorite music! It's like singing karaoke with your fingers! The alpha includes four songs:

While Steno Arcade is designed to be played with a steno machine, it can also be looked at as a traditional typing game that can be played with any standard keyboard. You only need an NKRO (N-key rollover) keyboard if you intend to learn stenography and want to play the game using steno. For example, the slower, easier songs in Steno Hero are perfectly playable using a standard keyboard, but when you get to the faster, harder songs you may find yourself having trouble keeping up with a standard keyboard and will need to use steno if you want to complete the songs with a high level of accuracy and precision.

Steno Arcade is being developed on top of the Godot open source game engine, and the source will be released under the Creative Commons Attribution-NonCommercial-ShareAlike 4.0 International (CC BY-NC-SA 4.0) license upon completion.

Steno Arcade is brought to you by The Open Steno Project[openstenoproject.org] and For All To Play[foralltoplay.com].
< >
25 Comments

For All To Play  [author] Jan 13, 2016 @ 3:08pm
@ psybernut Both. Steno Arcade is intended to be played with a steno machine so that stenographers can practice and improve their skills, but you can still play without an NKRO keyboard if you treat the game as a traditional typing game. You only need an NKRO keyboard if you intend to learn stenography and want to play the game using steno. For example, the slower/easier songs in Steno Hero are perfectly playable using a standard keyboard. It's only when you get to the faster/harder songs that you won't be able to keep up with a standard keyboard and will need to use steno if you want to complete the songs with a high level of accuracy and precision.

psybernut Jan 13, 2016 @ 11:48am
Is this game developed with the idea of using a qwerty keyboard or a steno machine or both?

stenoknight Jan 7, 2016 @ 12:26pm
You can play the four-song demo right now! The crowdfunding campaign for the expanded version (with more features in Steno Hero as well as three other steno tutorial games) is coming soon! But the more press we can get, the better our chances of being able to make all four games, so getting this onto Steam would be amazing. Please spread the word as much as you can, and thanks for your vote!

selrahcthewise Jan 4, 2016 @ 3:42pm
Any word on this getting greenlit? I would like to play this i am in the 60 wpm class at my steno school and I think this may help.

dragon788 Dec 26, 2015 @ 7:02pm
@Gana @For All To Play You can also utilize a non NKRO keyboard with Plover by using an arpeggiate method where you hold the first character and type others until the end of the word and then release (hold at least one character of the word while typing others throughout the word).

Steno Arcade has been Greenlit and is now listed in the Steam store. For the latest information, purchase options, and discussions for Steno Arcade, please see it on the Steam Store or in the Steam Community.
Visit Store Page
For more details Visit Community Hub
For latest discussions
If you really, really want to, you can continue to the Greenlight page. Information on this page may be out of date, since all the action has moved to the areas noted above.