Greenlight > Games > Fede's Workshop
Greenlight is being retired. For more information on how to submit games to steam, refer to this blog post.
This item has been removed from the community because it violates Steam Community & Content Guidelines. It is only visible to you. If you believe your item has been removed by mistake, please contact Steam Support.
This item is incompatible with Greenlight. Please see the instructions page for reasons why this item might not work within Greenlight.
Current visibility: Hidden
This item will only be visible to you, admins, and anyone marked as a creator.
Current visibility: Friends-only
This item will only be visible in searches to you, your friends, and admins.
Oh My Godheads
Description Discussions2 Announcements14 Comments97 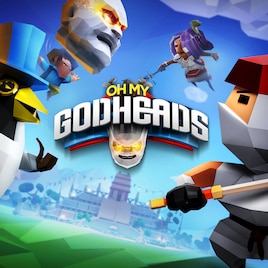 View Oh My Godheads in the store

We are so happy to announce that Oh My Godheads has now officially launched!

We have been working hard to add finesse to the game and listen to the community feedback from those who purchased the game in Early Access, we now feel like the game is finished for full launch and can’t wait to share all the new content with you!

We have created an infographic[i.imgur.com] alongside the launch to give you all some information about the characters, heads, game modes and levels! This should give you all an idea as to what we’ve worked on and added, so for those of you who did jump into the Early Access you’ll see some changes in the finished version.

We also have a brand new launch trailer for those of you who are new here, you can check this out on our YouTube channel here.

We’d like to thank our community for their on-going support and we really hope you enjoy jumping into a frenzied round of capture-the-head or two this holiday with family and friends!

We are happy to announce that Oh My Godheads will be released both in consoles and Steam on December 5!

Of course you can still get the Early Access version here:
http://store.steampowered.com/app/522740/

Published in Steam's Early Access we hope to continue polishing and adding contents to the game with the help of all the community. So please leave your thoughts, and don't be afraid to ask us questions.

Oh My Godheads is the world's first capture-the-head action game for 1-4 players.

Capture-the-head is like capture-the-flag, but the flag is an ancient head that's alive, angry, and after you! Fight with friends to capture these furious, living heads and bring them back to your team's plinth...if you can.

Born from a love of old school multiplayer games like Micro Machines, Worms, Power Stone, Sensible Soccer, or Street Fighter. But also from some recent indie games like Samurai Gunn, Nidhogg or Towerfall.

FOLLOW US TO KNOW MORE!
Popular Discussions View All (2)

Fede  [author] Sep 27, 2016 @ 5:51am
@ItsChipper We are working on seeing what is the best solution in terms of beta release. Nothing is final, so we could possibly not do it, but we are going to try our best to do it, and to do it soon. We do think that players feedback will be key to make the game balanced and fun! We can't give you dates yet, but please do register in our mailing if you want to know first ;)

@C∆PR∆NI™ Thanks a lot! We enjoyed a lot showing the game and seeing people having fun with it!

@[TDG] MisterBroda We are really happy you liked it. We are aiming at first quarter of 2017. But there's nothing confirmed just yet, as we are working hard in adding contents and polishing.

MisterBroda Aug 24, 2016 @ 1:38pm
Played your game with some friends at the Gamescom in Cologne. Awesome thing you are doing here! We really liked it. :) Is there already an estimated releasedate?

Fede  [author] Jul 4, 2016 @ 8:23am
Thanks bLiND!
BTW which "logo" are you referring to? The one with the red background? The in-game logo with 3D visuals? Or the logo in the third image of this campaign with the action image on the background?

bLiND Jul 3, 2016 @ 6:12am
fun and addictive gameplay, i loved playing it @ unite2016. just please work on the logo, the current doesn't live up to the standard set by the rest of the game

Fede  [author] Feb 17, 2016 @ 6:00am
Thanks a lot Merlander! Also thanks for the godhead ideas!
This is not the first time we are mentioned about Fat Princess, we are flattered :)

Merk Feb 15, 2016 @ 8:42pm
Is online planned or just a local experience, because it has a really cool Fat Princess vibe to it and it would be fun to play with my online friends
< >

Oh My Godheads has been Greenlit and is now listed in the Steam store. For the latest information, purchase options, and discussions for Oh My Godheads, please see it on the Steam Store or in the Steam Community.
Visit Store Page
For more details Visit Community Hub
For latest discussions
If you really, really want to, you can continue to the Greenlight page. Information on this page may be out of date, since all the action has moved to the areas noted above.