Greenlight > Games > Descension's Workshop
Greenlight is being retired. For more information on how to submit games to steam, refer to this blog post.
This item has been removed from the community because it violates Steam Community & Content Guidelines. It is only visible to you. If you believe your item has been removed by mistake, please contact Steam Support.
This item is incompatible with Greenlight. Please see the instructions page for reasons why this item might not work within Greenlight.
Current visibility: Hidden
This item will only be visible to you, admins, and anyone marked as a creator.
Current visibility: Friends-only
This item will only be visible in searches to you, your friends, and admins.
Descension
Description Discussions1 Announcements1 Comments142

With the Greenlight campaign now in full swing, we wanted to share some more information about the game and some screenshots of what we’ve been working on over the last year!

First and foremost, we would like to touch upon the artwork that you’ve seen in the video and screenshots. Much of our artwork is still being worked on and polished, and for the actual release, you can expect cleaner animations, more fleshed out environments, and a much higher resolution character. 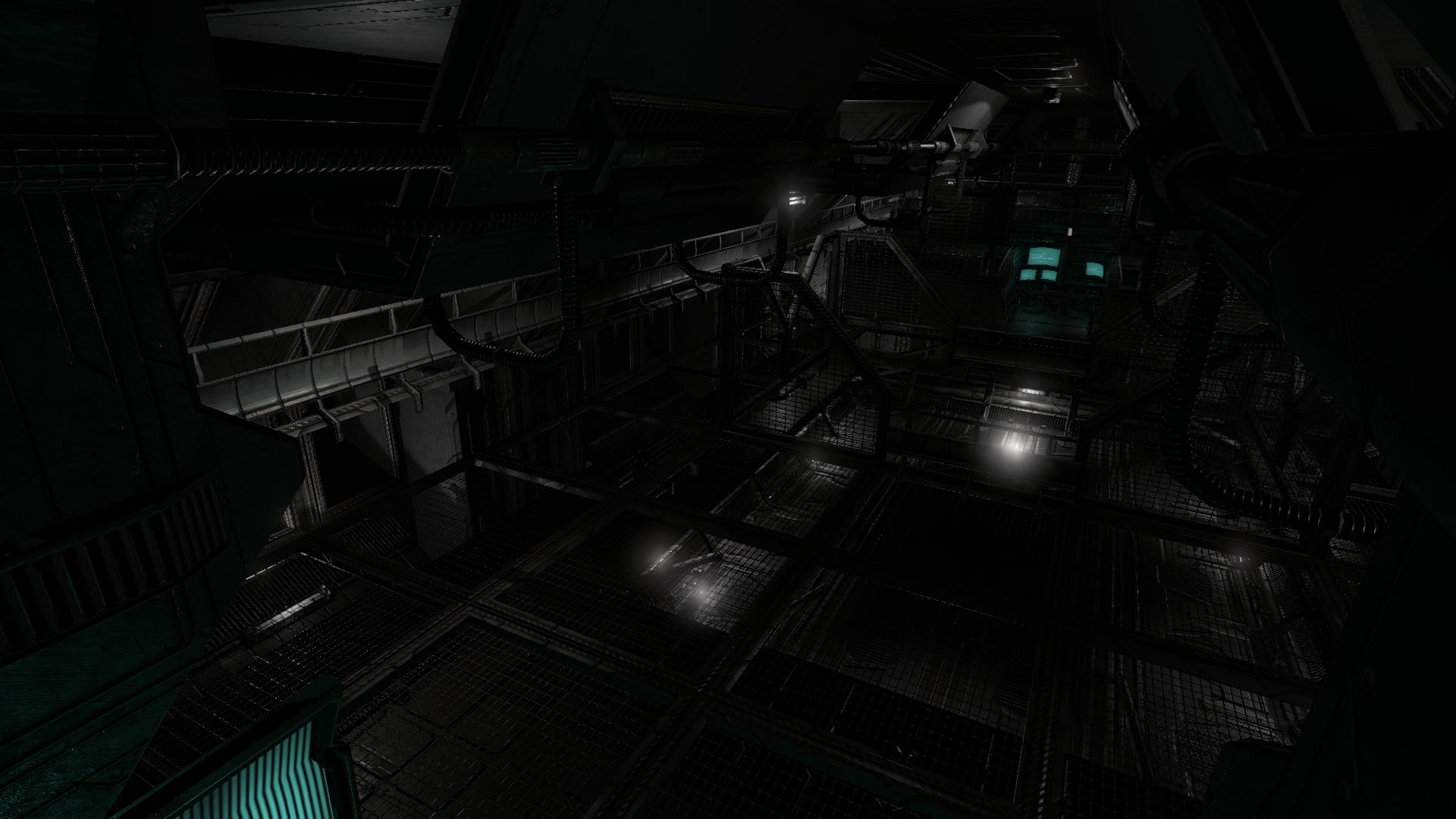 As it was so briefly mentioned in the Greenlight description, we understand that it may be kind of hard to figure out how multiplayer fits into the game. It’s important to know that we choose to set ourselves aside from most survival games in that our multiplayer is cooperative, not competitive. 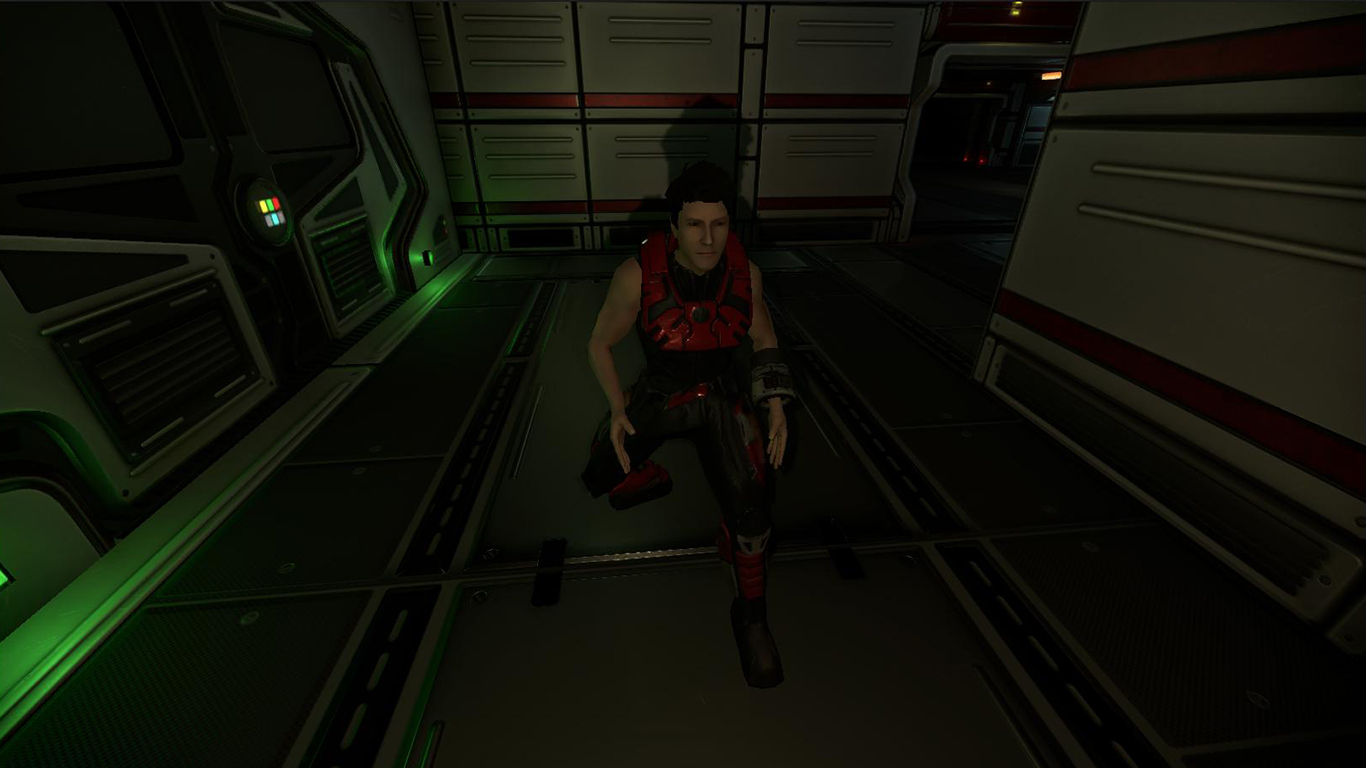 When we set out to make Descension, we wanted to ensure that the narrative and exploration of the play-space were central to the game, so we opted to limit the game to cooperative play (friendly-fire is on however!)

You can play with your friends through invitation, or with random players from around the world through matchmaking. This will create an environment where cooperation can add to the experience rather than detract from it.

Of course, modding is possible though, so who knows what someone may think up using multiplayer mechanics. :)

Unlike the recipe-based crafting systems you will find in many games, we wanted a system that could lead to incredibly unique item combinations. In our game, items are crafted using raw components, which can be scavenged from ships around the void. 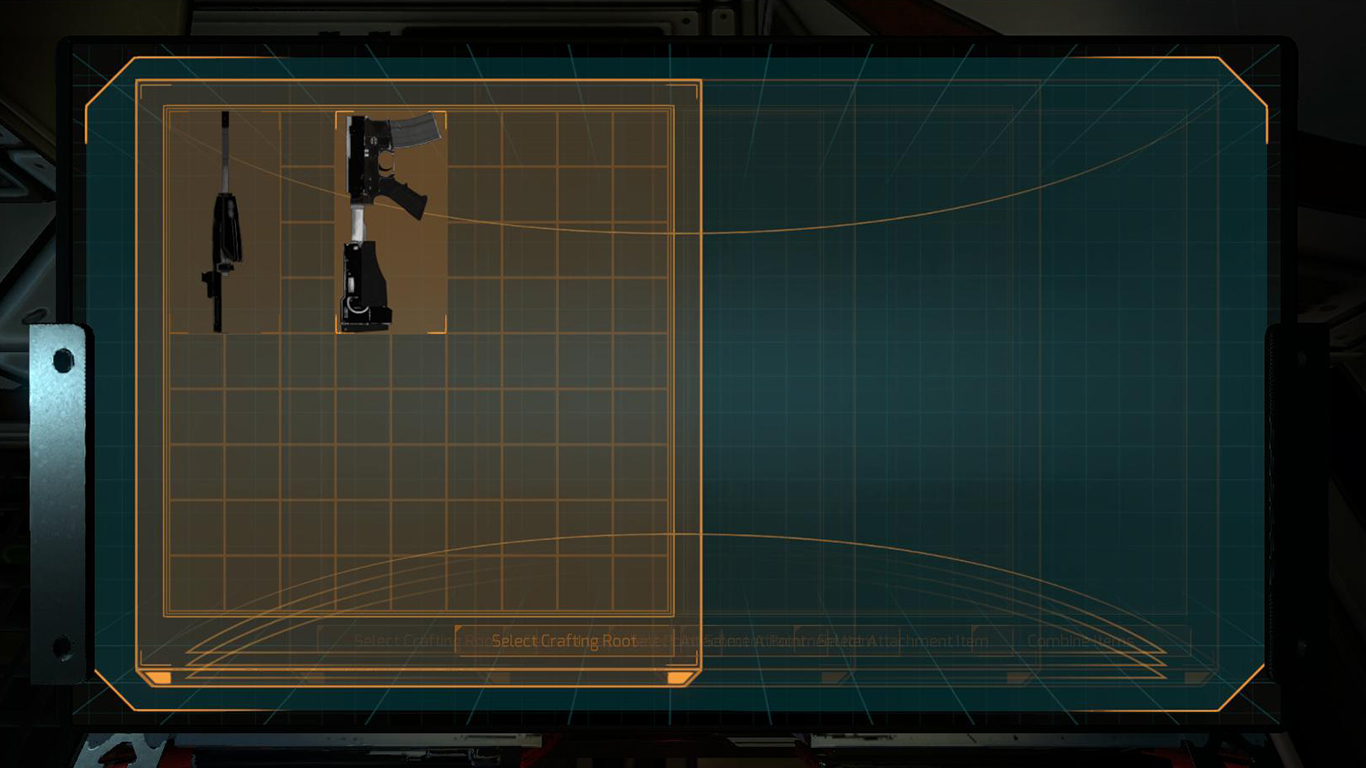 As with most things in the game, items are also mods that anyone can create. You simply build the item asset in the editor, and then export it for use in the game. Items themselves are controlled using LUA scripts, allowing you to either simply re-use our scripts to create generic items, or write your own to create incredibly complex items. Perhaps you might create a set of keycards that allow access to different areas of your ship, or an item that immediately kills the player when they fire it. Anything is possible!

“The Void” is more or less the Bermuda Triangle of space. Since its creation, various races from across the multiverse have fallen victim to this place, and their derelict ships have become your playground. You and your friends will put on space suits, and jump from one ship to the next. 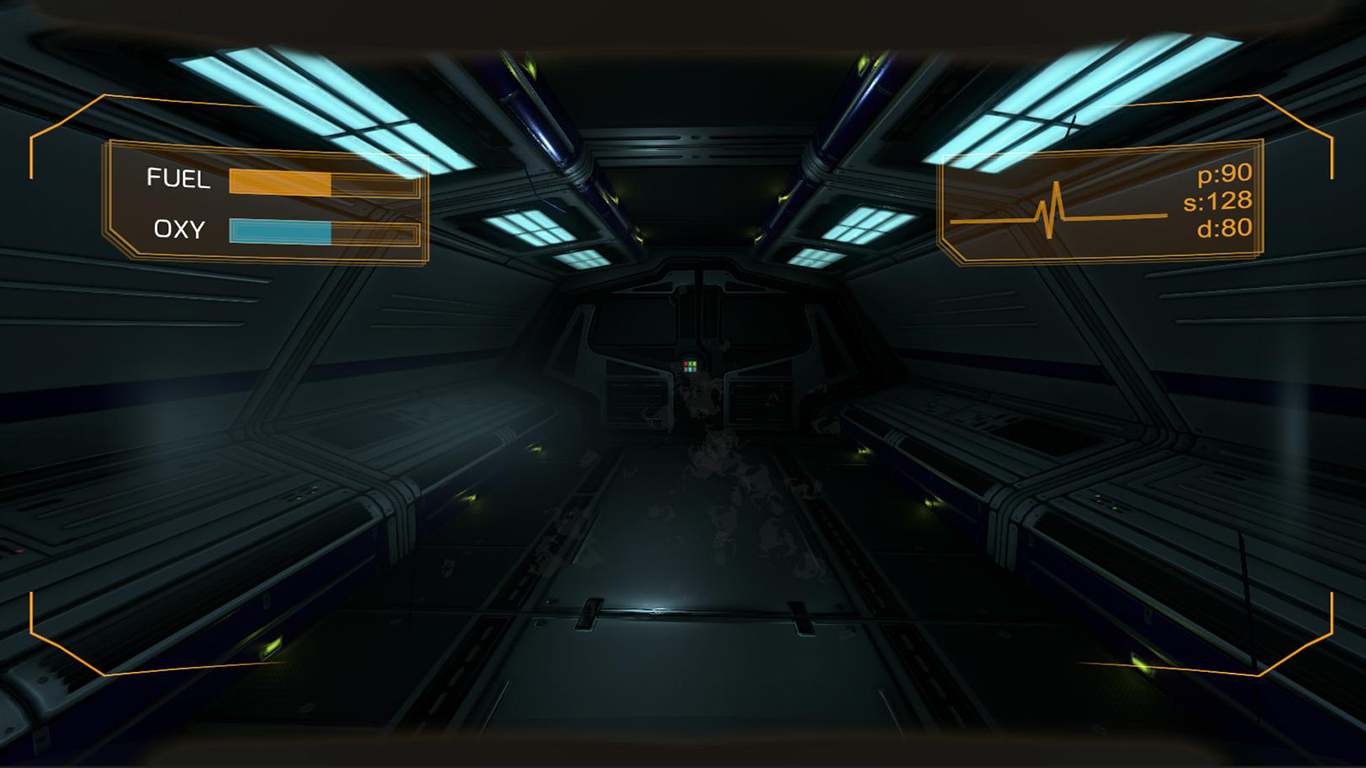 Even space is filled with danger, though not from the enemies you might find inside the ships themselves. Navigating between ships will consume valuable fuel and oxygen, and too many wrong moves could leave you drifting off into the distance, left for dead after depleting all of your fuel. 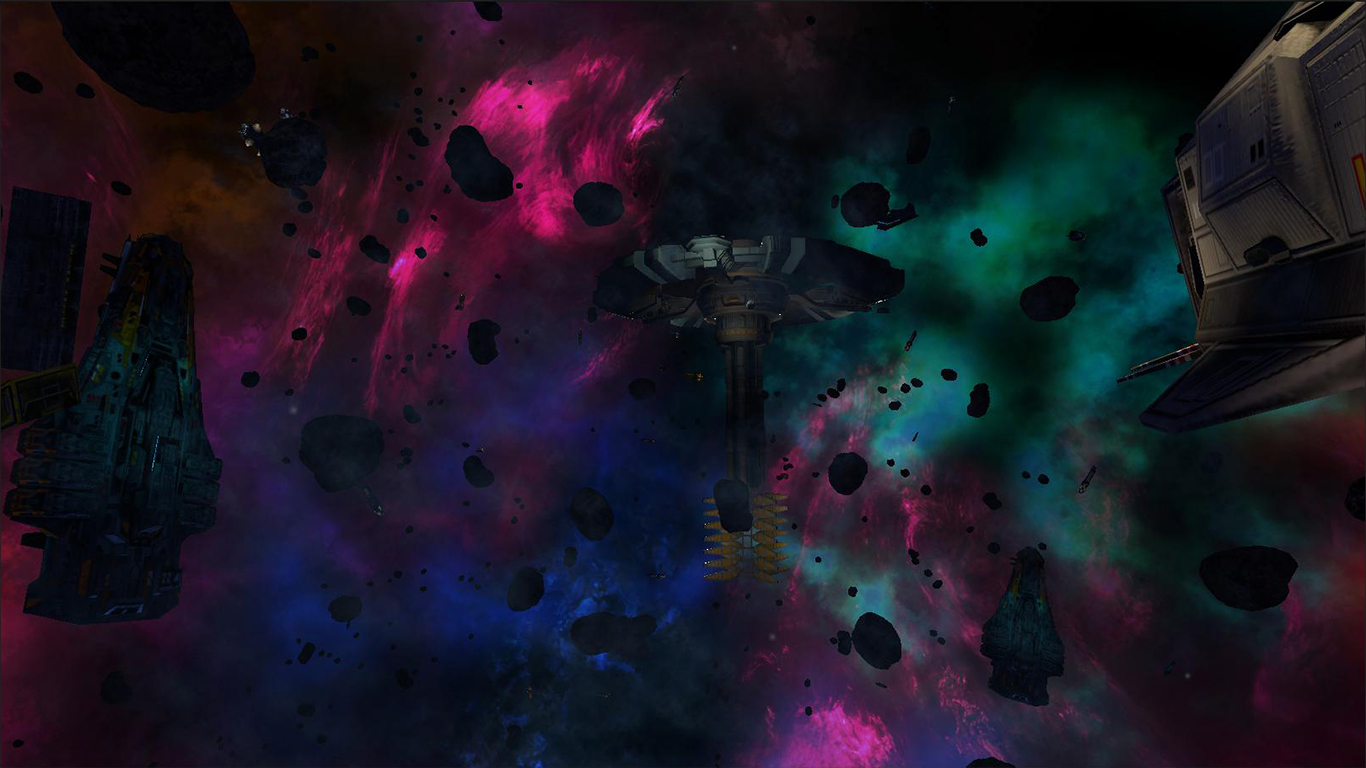 Each ship is filled with supplies you will need to survive. Food, water, weapons, and more will keep you moving from one ship to the next, prolonging your life. How long will you survive?

The final thing up for discussion today is how we have implemented our player stats. Rather than having some silly little “health” or “hunger” bar, we have opted for a more realistic approach. 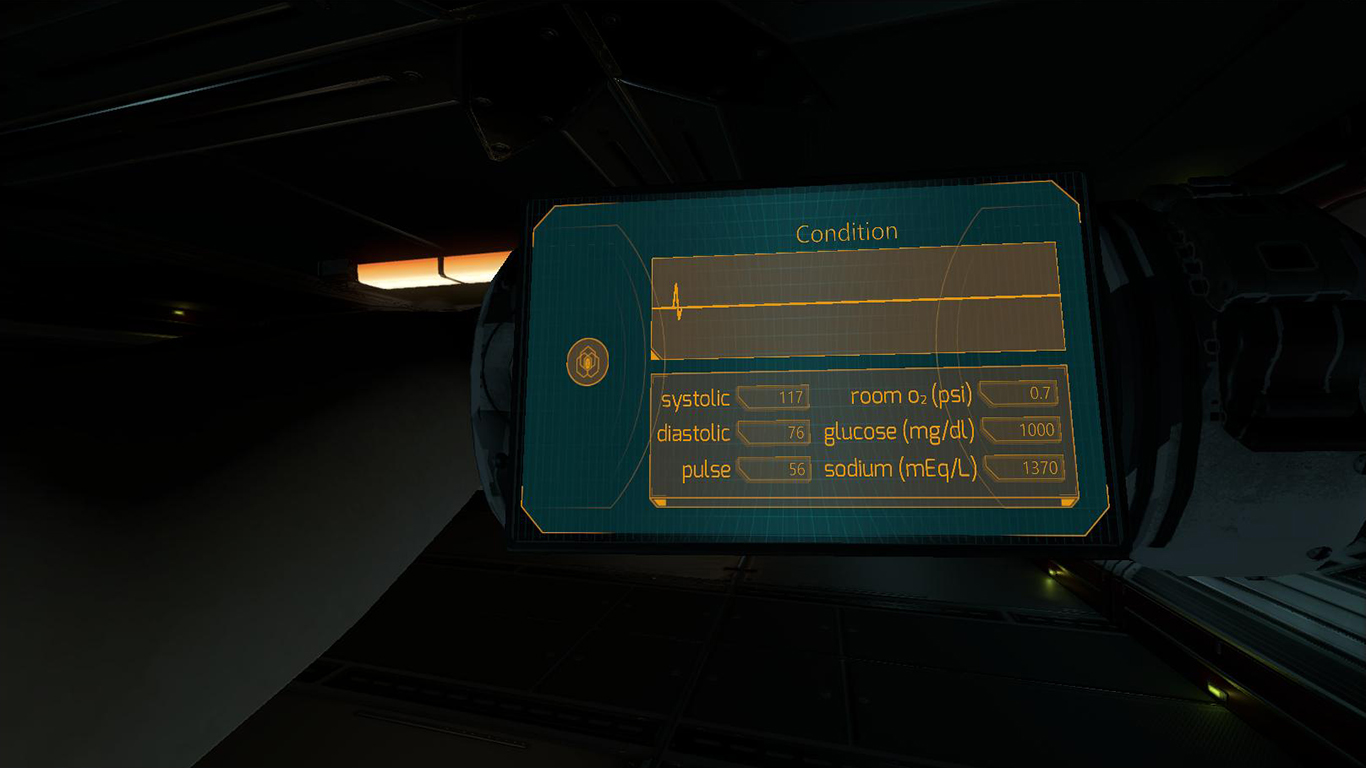 In order for you stay alive, you must keep your pulse and blood-pressure from reaching dangerous levels. This can be done by staying fed, staying hydrated, and not getting killed. As an example of how the system works, when you enter an intense combat situation, adrenaline will flood your body, increasing your pulse, dehydration, and your player’s movement speed. Injecting adrenaline can give you an edge, but too much will lead to death.

It’s a very cool system, and we can’t wait for everyone to play with it!

Read More
Description
Release date: Early 2017
Descension is a highly-moddable multiplayer space survival game. Trapped in a mysterious universe filled with the wreckage of civilizations across the multiverse, you and your friends must survive by exploring and scavenging resources from what's left of their ships. Each ship is driven by a unique narrative, giving insight into this place, these people, and what brought all of you here.

With no hope of escape, will you rise to greet death calmly, or will you send it back to the void in terror?

Driven by what we're calling the "GraveKeeper," each ship has a different story to tell. Separating them is the harsh brutality of space. Navigate the void, taking care to preserve oxygen and fuel to avoid a cold death. Explore each ship, fighting your way through unique scenarios, both with and without gravity.

Learn about each civilization, how they got there, and scavenge food, water, and item components along the way. Use components in our modular crafting system to build your own weapons and utilities, tailored to suit your desired play-style.

"The Void" is a lifeless universe, left silent and empty by the actions of its dominant race, the Inferna. After collapsing all matter in the universe into a singularity, they harnessed its power in order to create a rift in the multiverse, accidentally tearing holes into every universe in the process.

If some unfortunate soul happens through one of these rifts, they vanish, becoming trapped within the infinite void with no hope of ever leaving. The players, members of the Earth Coalition, had just narrowly escaped a Xilli cruiser when they fell into the void. With no chance of escape, the only option is to survive.

From the beginning, we have always felt that deeply integrated modding was important to the lifeblood of the game. With the backdrop of the void, it seems only fitting that people be able to contribute to this vast pool of lost ships. Using our tools and LUA scripting, players will be able to create new alien races, ships, narratives, and item components.

Create your own murder mystery on a luxury liner, or tell the tale of an experiment gone wrong, anything is possible! Once imported, the "GraveKeeper" will take charge, integrating your assets into the game and bringing your contribution to life.
< >
142 Comments

HunterKiller Jan 17, 2017 @ 11:13am
I would like to read something new about any progress being made, myself. It's yet to be ready for any kind of purchase and still sitting on my wish list.

eddiecccc Dec 5, 2016 @ 1:44pm
So no update's in a very long time? and can't find any new or info about the game anywhere? i was hoping this was a FoM rebirth cause everyone misses that game deeply and just want to hear the updates about this new game

Deviant Killer Oct 21, 2016 @ 9:06am
What you need in this is some teams, like, police, military, some merc's, traders/eco'ers, treehuggers.
Should be a huge MMOFPSRPG, where all the players change what happens, set up the markets, etc... That would be kind of cool.

Would check it out then for sure.