Greenlight > Games > sven4669's Workshop
Greenlight is being retired. For more information on how to submit games to steam, refer to this blog post.
This item has been removed from the community because it violates Steam Community & Content Guidelines. It is only visible to you. If you believe your item has been removed by mistake, please contact Steam Support.
This item is incompatible with Greenlight. Please see the instructions page for reasons why this item might not work within Greenlight.
Current visibility: Hidden
This item will only be visible to you, admins, and anyone marked as a creator.
Current visibility: Friends-only
This item will only be visible in searches to you, your friends, and admins.
Stars in Shadow
Description Discussions7 Announcements2 Comments249 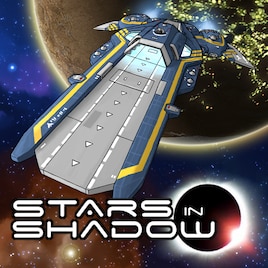 sven4669
Offline
See all 7 collections (some may be hidden)

View Stars in Shadow in the store

Good news! We are in the final stages of signing with a publisher, the details of which will be announced next week on Thursday, April 21. This deal will allow us to complete the game in time for release in the second half of this year.

You can find more info on our website[stars-in-shadow.com].

Arioch and I will be joining Space Game Junkie[www.spacegamejunkie.com] for an SiS-themed podcast tonight. Check out the live steam at 5:30PM PST!

Though as we say on the website, the preorder system is actually going to be taken down later this week, as part of our upcoming publishing deal. Anyone who preorders before Wednesday will get in under the old rules though.

javierucu Feb 9, 2016 @ 1:40am
hi, I think this project looks fantastic.Nice cover. This kind of games are exciting. Now i´m finishing the soundtrack in other game and it would be great to work beside such a promising team. I think my music could fit well in your project. You could listen some of it here: https://www.youtube.com/watch?v=pA7fQzZ9gUU What do you think? my email is: cga.sound@gmail.com Thank you. Good Job.

Shait Jan 15, 2016 @ 3:23pm
It reminds me a lot of Master of Orion 2. MoO 2 along with X-Com Enemy Unknown were best scifi turn-based strategy games I ever played. I wish you good luck guys and hope you can make amazing game similar to MoO2. I'm looking forward to your game.

Stars in Shadow has been Greenlit and is now listed in the Steam store. For the latest information, purchase options, and discussions for Stars in Shadow, please see it on the Steam Store or in the Steam Community.
Visit Store Page
For more details Visit Community Hub
For latest discussions
If you really, really want to, you can continue to the Greenlight page. Information on this page may be out of date, since all the action has moved to the areas noted above.