Greenlight > Games > Slug Disco's Workshop
Greenlight is being retired. For more information on how to submit games to steam, refer to this blog post.
This item has been removed from the community because it violates Steam Community & Content Guidelines. It is only visible to you. If you believe your item has been removed by mistake, please contact Steam Support.
This item is incompatible with Greenlight. Please see the instructions page for reasons why this item might not work within Greenlight.
Current visibility: Hidden
This item will only be visible to you, admins, and anyone marked as a creator.
Current visibility: Friends-only
This item will only be visible in searches to you, your friends, and admins.
Empires of the Undergrowth
Description Discussions25 Announcements11 Comments395 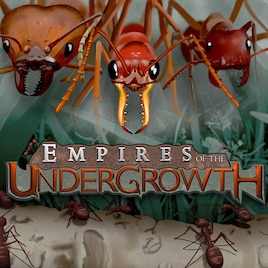 View Empires of the Undergrowth in the store

Check out the video and go get it! Lots have changed!
http://www.indiedb.com/games/empires-of-the-undergrowth/downloads

We have returned to Kickstarter, for more info check us out on there at:
https://www.kickstarter.com/projects/eotu/empires-of-the-undergrowth-rise-of-the-colony

Don't forget to check out the demo!

Empires of the Undergrowth is a dungeon management style ant colony simulator with an emphasis on fast-paced strategic encounters. Players will excavate their nest from the earth, build up an army and engage in tug of war style battles as they attempt the journey back to their ancestral mating grounds.

The game’s theme is taken from the natural world, offering a fresh alternative to the usual sci-fi or fantasy setting for the genre. Following the theme, the campaign story is told from the perspective of a nature documentary team studying the insects.

Along the way your colony will face harsh environmental challenges: you must escape devastating floods and cross barren wastelands; deadly real world challenges will test your colony’s strength; huge beetles and fearsome arachnids will make quick work of undefended workers... and you will soon discover that your colony isn't the only insect empire to lay claim to the undergrowth.

Clash with rival ants in huge, frenzied battles. Assimilate powerful new species into your colony as you head for the ancestral mating grounds. Need ranged artillery? Then you will want to make use of the acid shooting wood ants. Trouble breaking through a fortified line of fire ants? Send your exploding carpenter ants into the fray and melt them with corrosive acid!

In the end, only one colony will dominate atop the pinnacle of the ancestral mating grounds and secure its place amongst the great Empires of the Undergrowth.

I have HAD IT!
CodeNameWolf

RagingPapaBear Feb 21, 2017 @ 2:44am
How is the game coming along? Can't wait to get the key via e-mail for kickstarter (think kickstarter was when I donated on Aug 16 lol) :D The minute I saw this game on Youtube I had to donate to help out, brought back childhood memories of the game Sim Ant by Maxis in 91' lol.

Slug Disco  [author] Feb 14, 2017 @ 1:00am
@Thomas the inital release will not have multiplayer, it is something we would love to add but one thing at a time.
@BenevolentGoldfish Physical rewards will be going out soon, with digital ones following a few months later, keep an eye out for updates as we will be making some announcements in the coming weeks
< >

Empires of the Undergrowth has been Greenlit and is now listed in the Steam store. For the latest information, purchase options, and discussions for Empires of the Undergrowth, please see it on the Steam Store or in the Steam Community.
Visit Store Page
For more details Visit Community Hub
For latest discussions
If you really, really want to, you can continue to the Greenlight page. Information on this page may be out of date, since all the action has moved to the areas noted above.