Greenlight > Games > Katapult's Workshop
Greenlight is being retired. For more information on how to submit games to steam, refer to this blog post.
This item has been removed from the community because it violates Steam Community & Content Guidelines. It is only visible to you. If you believe your item has been removed by mistake, please contact Steam Support.
This item is incompatible with Greenlight. Please see the instructions page for reasons why this item might not work within Greenlight.
Current visibility: Hidden
This item will only be visible to you, admins, and anyone marked as a creator.
Current visibility: Friends-only
This item will only be visible in searches to you, your friends, and admins.
CHKN
Description Discussions18 Announcements12 Comments620 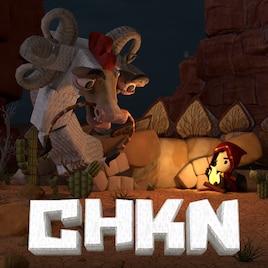 kyvynchen
Offline
See all 380 collections (some may be hidden)

View CHKN in the store

Store page
Recent Announcements View All (12)
We have moved over to our Early Access page!
February 15, 2016 - LilyHammer0709

Our page is now open and live for Pre-Release. CHKN is not for sale yet, but we will be posting our announcements there from now on.

So come on over, follow us, put us on your wishlist, and stay up to date with all things CHKN related!

Read More
Dev Update and Sneak Peaks and Videos, OH MY!
February 5, 2016 - LilyHammer0709
HEY GUYS!
Lots of stuff happened this week so let's get right to it!

Our community manager made a video that she wanted you guys to see! It's a FAQs video where Kate answers most of your questions! Wondering if the game will be free? If it's coming to android? Wondering how to be a YouTube? Watch the video to find out!

https://www.youtube.com/watch?v=GiILhJbj5JI
Kate is our community manager and her job is to make you guys happy!

We put the CHKN demo on GameJolt[gamejolt.com] and we were featured on the front page! The community had a lot of nice comments and gave us a current rating of 4.6/5. Not too shabby.

Roman has been testing larger and more dense environments in the terrain engine. Check out this short video of him running into trees and stuff.

https://www.youtube.com/watch?v=EUjsPRdbIHg
Featuring running into trees, starting at grass, and falling to the ground.

John is working on implementing recipes for the upcoming crafting feature. Check out this screenshot below of how the UI will look with recipes implemented. Kevin created these great textures for eggs for when we implement egg hunting. Egg shells will have varying levels of strength, depending on what they are made of. You will need different tools or creatures to break open different eggs and find goodies inside. More on that soon! CHKN is an open-world sandbox game where you create life block by block. You are the creator, explorer, and caretaker. Your creatures will have unique personalities and emotions that shape how you play the game. Learn to bond with them in order to explore new lands, find resources and survive. Will you play fetch with your cuddly dog or feed it to your uni-dog-ram-giraffe? Wonder what that looks like? Bring one to life! The combinations are endless. It’s survival of the strangest.

Emotions play a pivotal role in the game: In order to progress you must form bonds with creatures who will in turn help you discover new items and traverse newly discovered lands.
Everyone’s experience is different. No two creatures are the same. You can use endless combinations of life blocks to create anything from a conventional creature to some crazy combination.
Different combos mean different emotions. Combining chicken blocks with giraffe blocks creates different emotions than, say, combining dog and snake blocks.
You build a reactive creature, not just an object. Understanding how your creature will react to you and your environment changes the entire concept of a sandbox game.
Creatures fart and burp. Enough said.

Create! Build creatures and homesteads, all from the resources you collect from your surroundings.
Bond! Creatures have unique emotions in CHKN, ranging from happy to angry. You are able to bond with these emotive creatures to form relationships in order to advance through the game.
Thrive! Find and hatch eggs to restore symbiosis to this strange planet.
Survive! Build shelters and grow food. Fight the evil poachers who threaten to destroy your creatures.
Explore! You and your creatures can explore multiple biomes, all unique and filled with secrets.
Empathic Intelligence System: Creatures have the ability to learn and adapt based on how you treat them, passing these traits and memories on to their offspring. Their reactions and personalities are unpredictable and chaotic, in the most interactive way possible.
Creative Mode: Unbridled freedom to create whatever you want.
Adventure Mode: Make your own adventure. Survive in any way possible.

The game will launch with a light version of Adventure Mode with the expectation that more features will be added over time. In the first release you will have to gather resources by exploring the world and use those resources to build creatures. This will then help you survive and build a homestead to keep your creations safe. The world will start off limited. Later additions will include more biomes, creatures, and modes including Multiplayer.

LilyHammer0709  [author] Feb 15, 2016 @ 1:48pm
Hello loyal greenlight community! We have moved over to our Early Access page which is open for pre-release! So head on over, follow us, and put us on your wishlist if you want to stay up to date with news and announcements! Thank you all for your continued support: http://store.steampowered.com/app/420930/

CHKN has been Greenlit and is now listed in the Steam store. For the latest information, purchase options, and discussions for CHKN, please see it on the Steam Store or in the Steam Community.
Visit Store Page
For more details Visit Community Hub
For latest discussions
If you really, really want to, you can continue to the Greenlight page. Information on this page may be out of date, since all the action has moved to the areas noted above.