Greenlight > Games > Black Shell Media LLC's Workshop
Greenlight is being retired. For more information on how to submit games to steam, refer to this blog post.
This item has been removed from the community because it violates Steam Community & Content Guidelines. It is only visible to you. If you believe your item has been removed by mistake, please contact Steam Support.
This item is incompatible with Greenlight. Please see the instructions page for reasons why this item might not work within Greenlight.
Current visibility: Hidden
This item will only be visible to you, admins, and anyone marked as a creator.
Current visibility: Friends-only
This item will only be visible in searches to you, your friends, and admins.
Mazement
Description Discussions2 Comments198 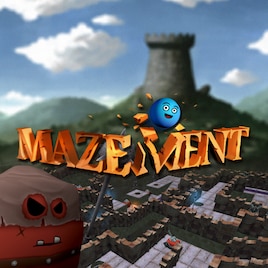 View Mazement in the store

Mazement is a ball rolling game that combines a fantasy story with the traditional wooden labyrinth and platformer games. Mazement boasts fully 3D graphics and interesting physics-based gameplay, including destructible environments. The player controls the tilt of the level to guide the ball safely through increasingly difficult mazes filled with puzzles, traps, enemies and secrets.

Coins can be collected to purchase different power-ups from the power-up shops in the hub levels. These power-ups allow the player to blast through walls or float across gaps. In the storyline the player sets out on a quest to free his ball friends from the tyranny of the evil pyramid and his cube minions.

The Steam release will feature improved graphics such as dynamic shadows and ambient occlusion, support for mouse/keyboard or Xbox 360 gamepad controls and a vastly improved user interface. The game will be released on Windows, Mac and Linux. Depending on the success of the Steam version we may even release additional levels and gameplay features.

- 30 sprawling levels filled with puzzles, dangers and excitement
- Physics-based gameplay, including destructible environments
- Fun and quirky storyline with beautiful illustrations
- Collectible coins and power-ups to augment yourself
- Upgrade yousrelf with power-ups from the in-game shop
- Fight unique and powerful bosses

jbernhardt Dec 22, 2015 @ 11:44am
looks very tricky Voted Yes. Hope you get the greenlight. Feel free to join this group and promote your game and greenlight campaign here: https://www.facebook.com/groups/shamelessgamepromotion/

Surrealknyte Dec 16, 2015 @ 4:55pm
This game looks absolutely AMAZEing. Can't wait to play it! Between the DD style artwork and labyrinthe inspired gameplay, this gem is a matter of when, not if. Count me in!

Mazement has been Greenlit and is now listed in the Steam store. For the latest information, purchase options, and discussions for Mazement, please see it on the Steam Store or in the Steam Community.
Visit Store Page
For more details Visit Community Hub
For latest discussions
If you really, really want to, you can continue to the Greenlight page. Information on this page may be out of date, since all the action has moved to the areas noted above.