Greenlight > Games > PIXELBLIMP's Workshop
Greenlight is being retired. For more information on how to submit games to steam, refer to this blog post.
This item has been removed from the community because it violates Steam Community & Content Guidelines. It is only visible to you. If you believe your item has been removed by mistake, please contact Steam Support.
This item is incompatible with Greenlight. Please see the instructions page for reasons why this item might not work within Greenlight.
Current visibility: Hidden
This item will only be visible to you, admins, and anyone marked as a creator.
Current visibility: Friends-only
This item will only be visible in searches to you, your friends, and admins.
Jump Stars
Description Discussions1 Announcements1 Comments32

PB Matthew
Offline
See all 4 collections (some may be hidden)

View Jump Stars in the store

Store page
Recent Announcements View All (1)
We received the award for Indie Game of the Year 2015 at Play Expo!
October 12, 2015 - PIXELBLIMP

We are very pleased to announce that we received the Indie Game of the Year Award at Play Expo in Manchester, UK! 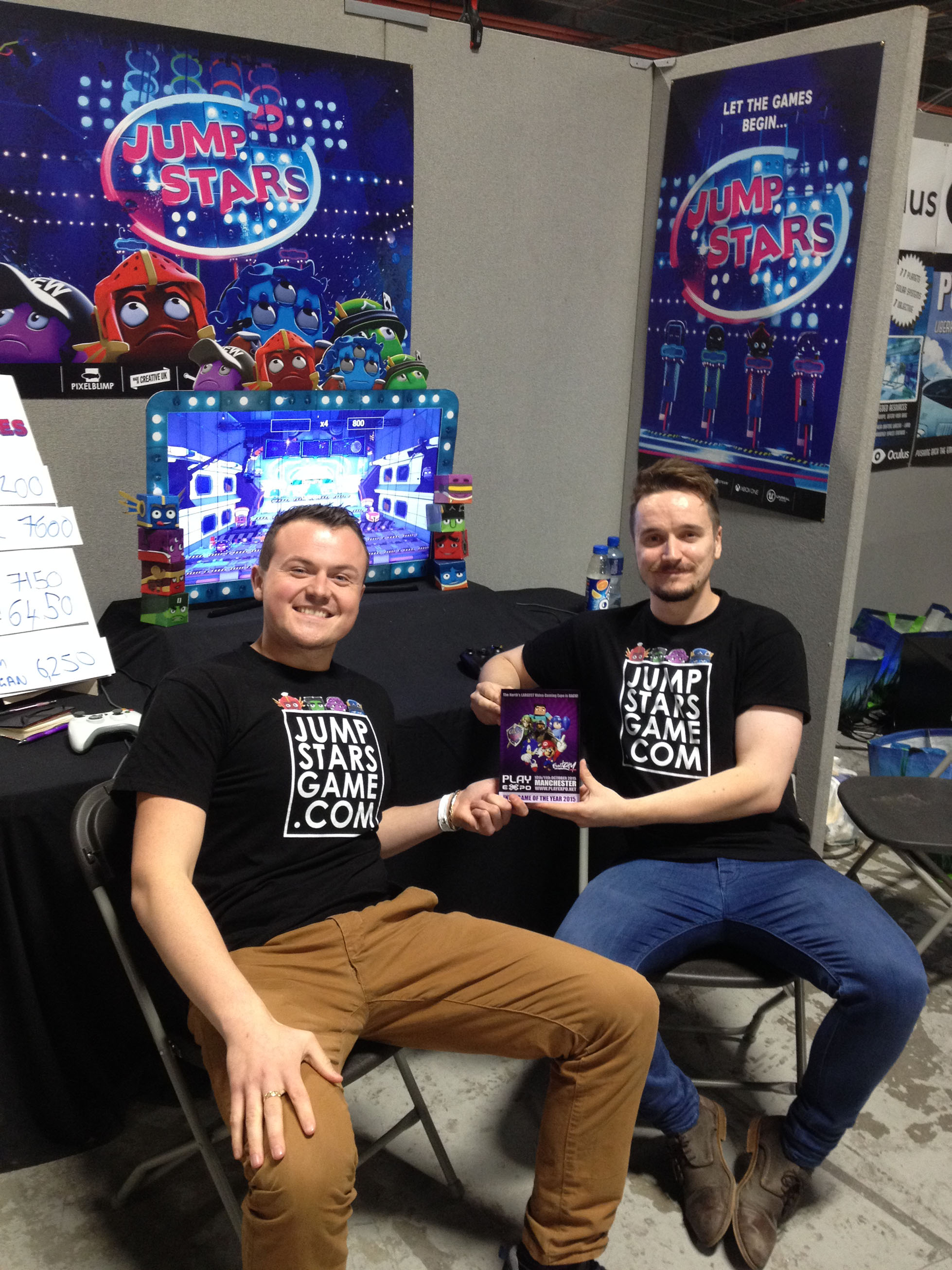 This is a huge deal for us as it was a consumer vote based award so we're so happy that people loved the game so much that they wanted to vote for it! Or maybe they just want to make sure it comes out so that they can beat there friends, again...but hey-ho, we're just so ecstatic that people enjoyed the game to such an extent! :)

We really hope some of the people that were at Play Expo see this so that we can thank them for the support!

It's been an amazing morale booster for the team and we just can't wait to get the game finished and released so that we can see what everyone does with it!

From the Pixel Blimp team.

Jump Stars takes place on the different sets of an abandoned TV studio – where the host just did not want to give up his day job and decided to create his very own show. The host has been kidnapping contestants to take part in his newly, and poorly renovated, ludicrously dangerous gameshow; Jump Stars! Where the props aren’t made from foam, where punching is just as important as points, and where the floor really is lava.

Are you ready to compete to be the best Jump Star? Remember now, you’re all working as a team…but there can only be one winner! 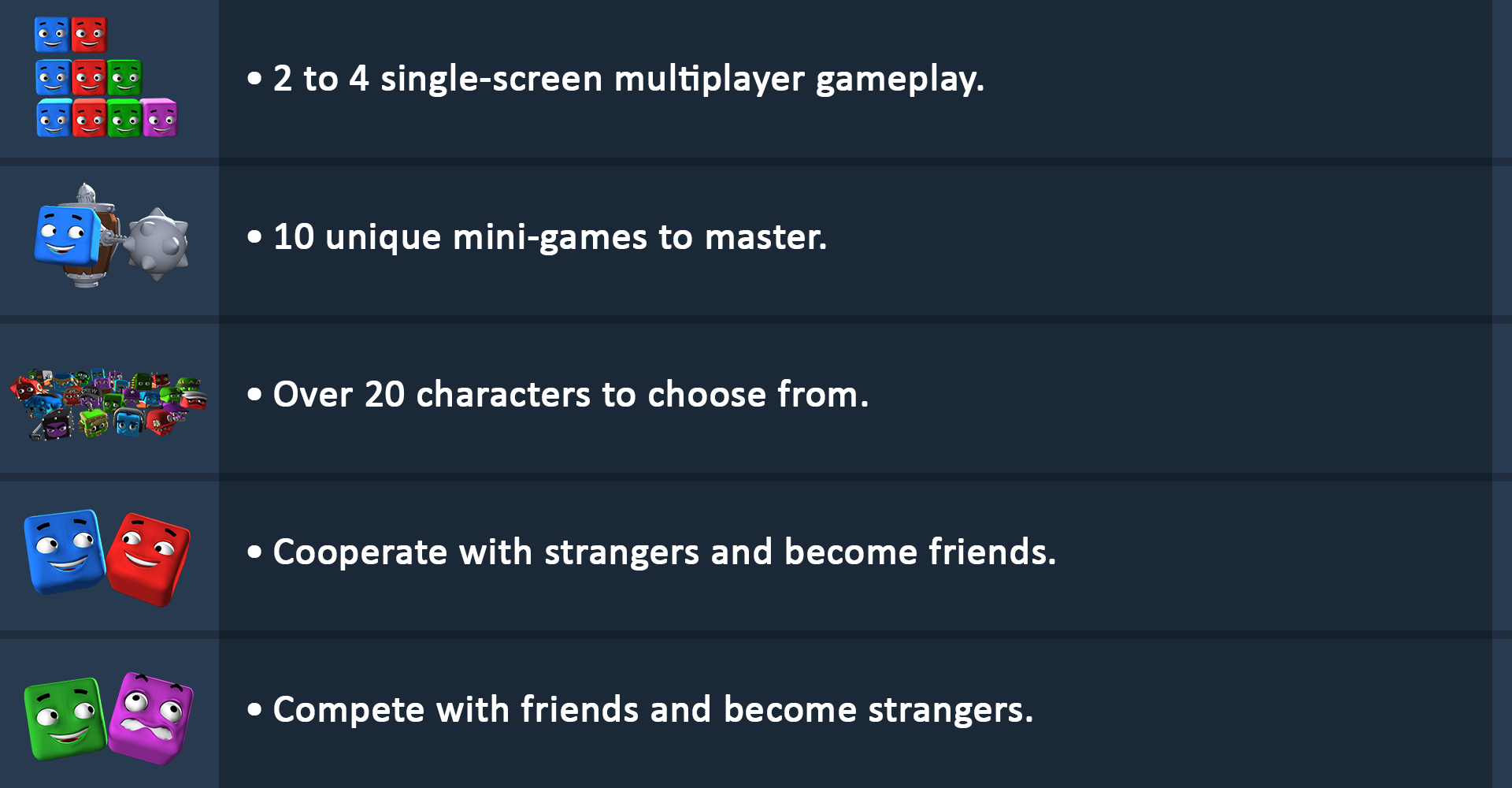 Each of these fantastic looking Cubees and Cubettes have the same abilities – punching and jumping their way to victory – so which character you play as really depends on who you think looks the most fabulous!

Jump Stars is made up of a collection of mini-games, each of which can be played cooperatively and/or competitively. It’s up to you to choose whether you work together to get the best possible team score, surpassing local and global leaderboards; or, you play competitively, ensuring that you’re the last Cubee to survive…

There are two simple and awesome ways to play these simply-awesome mini-games!

Custom Playlist:
Which lets you build your very own roster of mini-games to play through. Containing any number of duplicates of your favourite games. Playing this style lets you do what you want, how you want it. Play together and help one another get the best team scores on individual maps…or betray your friends and go for the first place prize!

Tournament:
Which loads in a random assortment of five unique mini-games. The combined team score from these five mini-games will be globally ranked, and you can see who has the best score out of you and your friends!

Juggernaut Dec 23, 2015 @ 8:02am
I'm in love with your model and graphics style! Both seem to match each other perfectly! Voted yes!

jbernhardt Dec 22, 2015 @ 12:04pm
Voted Yes. Hope you get the greenlight. Feel free to join this group and promote your game and greenlight campaign here: https://www.facebook.com/groups/shamelessgamepromotion/

Tekon Dec 14, 2015 @ 11:29am
Played this at Insomnia 56 and it was defeinitely one of (if not the ) best game I played at the event. Our team ended up getting the highscore which was cool.

The game is extremely fun to play with friends whether you're against each other or working together as a team. I will be recommending it to everyone when it's (hopefully) released!

Jammy Dec 14, 2015 @ 9:52am
Absolutely fantastic! Me and my friends played this at Insomnia 56 and it was by far the best indie game there. Not to mention the fact that we were at the top of the leaderboard for the whole weekend ;) Still an amazing party game that brings local co-op and competition back into the living room
< >

Jump Stars has been Greenlit and is now listed in the Steam store. For the latest information, purchase options, and discussions for Jump Stars, please see it on the Steam Store or in the Steam Community.
Visit Store Page
For more details Visit Community Hub
For latest discussions
If you really, really want to, you can continue to the Greenlight page. Information on this page may be out of date, since all the action has moved to the areas noted above.