Greenlight > Games > Bitmen Studios's Workshop
Greenlight is being retired. For more information on how to submit games to steam, refer to this blog post.
This item has been removed from the community because it violates Steam Community & Content Guidelines. It is only visible to you. If you believe your item has been removed by mistake, please contact Steam Support.
This item is incompatible with Greenlight. Please see the instructions page for reasons why this item might not work within Greenlight.
Current visibility: Hidden
This item will only be visible to you, admins, and anyone marked as a creator.
Current visibility: Friends-only
This item will only be visible in searches to you, your friends, and admins.
The Storm Guard: Darkness is Coming
Description Discussions3 Announcements5 Comments92

Bitmen Studios
Offline
See all 12 collections (some may be hidden)

View The Storm Guard: Darkness is Coming in the store

it is about time: the Storm Guard is now available on Steam Early Access! Assume your position and lead the order in its quest against the ancient dragon and its minions that are threatening the realm of men. Stand strong and do not falter! 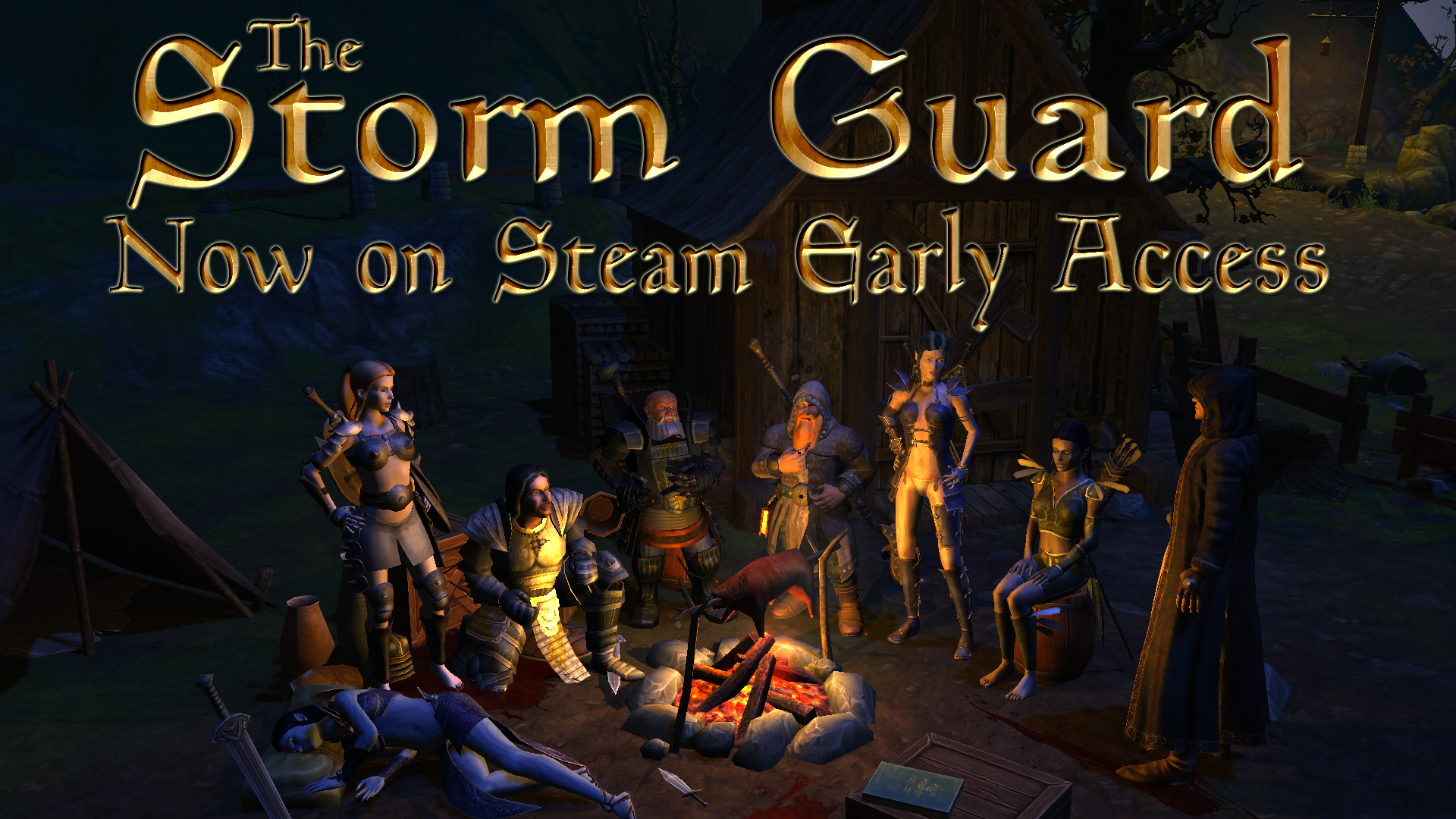 Happy new Year 2016 to all our followers. It's going to be a good year, as the wait is almost over. We've invested a lot into balancing and QA and are hoping to make The Storm Guard available in Early Access in January. Just a few minor tweaks to improve accessibility and you'll be able to assume your position, Lord Commander!

Read More
Description
The Storm Guard is a turn-based role-playing game inspired by the Night’s Watch in the Game of Thrones.

You assume the role of the Lord Commander of the Storm Guard, an ancient order that has sworn to protect the kingdom from the dangers to the north. After centuries of peace, the Storm Guard is a shadow of what it once was. But now the ancient dragon and its minions have returned and are laying waste to our lands. Darkness is coming upon the realm of men.

We need you, Lord Commander, to rebuild the Storm Guard back to old strength, find a way to defeat the invaders and restore peace to our lands!

Gameplay
Gameplay in the Storm Guard can be described as a mixture of XCOM, FTL and Guild Wars. It is divided into three layers: the strategy layer, the exploration layer and the combat layer. You, Lord Commander, are in charge of the order and must lead it during these dark times.

Manage the Order as Lord Commander
While taking a rest in Stormholm Keep, you need to spend your limited resources well to develop your order. Recruit new members or invest into your existing troops. As your troops get more experienced, you will want to buy better equipment, learn new skills, level up their abilities or buy life-saving potions.

Each class has access to a wide range of abilities. However, gold is scarce and making smart decisions is important. Make sure you have a team with great synergies that can handle different situations. Times are rough these days.

Explore The Dungeons
War is not won by sitting in town spending money and twiddling your thumbs. Assemble a well-rounded group of heroes from your roster and send them on a mission. En route, you will run into random events (much like beacons in FTL) that will require you to make a decision. Will you try to solve everything with sheer force or try to play more defensively? It is your choice, Lord Commander.

Tactical Combat
No matter how wise your decisions are, combat cannot be avoided at all times. When you run into an encounter, then your tactical skills will be put to the test. I hope you have developed your tactics in your career, Lord Commander. Mindless bashing random opponents rarely leads to good results.

Make use of positioning, flanking and learn how to best use synergies between your team members. Combine their skills in creative ways to come out ontop. However, don’t neglect studying your enemies and their strengths and weaknesses. Knowing your enemy and being able to predict their own tactics can make the difference between a glorious victory and utter defeat.

Be warned, Lord Commander, the old books in our library hold some horrible truths about our adversaries. While early engagements may be easy, we know for a fact that the north is the home of dozens of deadly creatures: mages, giants, flying creatures and other abominations beyond all imagination are threatening our lands. And finally, the dragon, only the gods know how to deal with it.

Combat Mechanics
There are a lot of options during combat - and a lot of room for errors. Use devastating offensive skills, protection or healing spells. Inflict conditions like bleeding, poison, weakness, crippled or blindness on your foes; use shouts or buffs to gain beneficial effects for the team. Some characters rely on spellcasting using powerful enchantments on their allies or hex the enemy to counter their plans.

AI
Make no mistake, our foes won't just stand there and take it like a ... monster. They have access to their own set of abilities and many creatures are smart: we have seen them cooperate, helping out their allies and using their own magic to get the upper hand during combat.

Death
I want to be honest with you, Lord Commander. Your men will die. And when they die, they stay dead. You better get used to it. Don’t quote me on that but losing a rookie is … how to say .... it sure is a tragic occurrence indeed but … it’s part of the job. Some are just more – expendable. I’m sure you get what I mean.

However, do your best to protect the veterans. An experienced hero with tons of expensive gear and powerful abilities is a considerable investment that you will want to protect. Maybe you became friends ontop of it, I don’t know. Anyway, losing your best men can be a considerable setback. Don’t sacrifice them mindlessly, if you can help it.

Final Words
Lord Commander, the Storm Guard needs you now more than ever! Please vote for the Storm Guard to support its development. The game is already fully playable and will proceed to early access soon after being green lit.
Popular Discussions View All (3)

The Storm Guard: Darkness is Coming has been Greenlit and is now listed in the Steam store. For the latest information, purchase options, and discussions for The Storm Guard: Darkness is Coming, please see it on the Steam Store or in the Steam Community.
Visit Store Page
For more details Visit Community Hub
For latest discussions
If you really, really want to, you can continue to the Greenlight page. Information on this page may be out of date, since all the action has moved to the areas noted above.