Greenlight > Games > feline.fuelled's Workshop
Greenlight is being retired. For more information on how to submit games to steam, refer to this blog post.
This item has been removed from the community because it violates Steam Community & Content Guidelines. It is only visible to you. If you believe your item has been removed by mistake, please contact Steam Support.
This item is incompatible with Greenlight. Please see the instructions page for reasons why this item might not work within Greenlight.
Current visibility: Hidden
This item will only be visible to you, admins, and anyone marked as a creator.
Current visibility: Friends-only
This item will only be visible in searches to you, your friends, and admins.
Sandra and Woo in the Cursed Adventure
Description Discussions4 Announcements1 Comments117 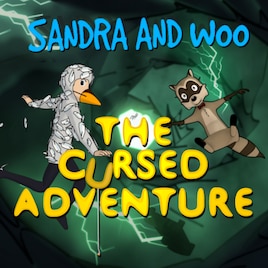 feline.fuelled
Offline
See all 7 collections (some may be hidden)

View Sandra and Woo in the Cursed Adventure in the store

Many of you asked for Mac and Linux versions of the game. We can now confirm, that there will be a Mac version! Regarding Linux, we will try out Visionaire Engine's Linux exporter with our game next week, so stay tuned, dear Linux gamers.

A lot of your feedback is targeted towards the animations. At the moment, the whole team is working on improvements, including higher framerates inside the engine, more overall frames per animation as well as acceleration and smoothing. We're also reworking some of the character models that aren't looking good enough yet.

Last but not least:
Thanks to all of you supporting us!

Play with Sandra and Woo in a video game adventure for the very first time! Solve tricky riddles, combine cool objects to make even cooler objects! Only with your aid, your genius, your bravery and your good looks will it be possible for our heroes to escape from the cursed adventure unscathed!

Fully voiced Dialogues
All thousands of lines are fully voiced in both English and German, accompanied by an atmospheric soundtrack.

Sandra and her pet raccoon Woo live a completely normal, suburban lifestyle. There is absolutely nothing out of the ordinary about them. Except for the fact that the racoon talks, so that's a little bit different. Oh, and Sandra's friends include an artistically-inclined pyromaniac and a Burmese freedom fighter named after a video game character. But apart from that? Perfectly normal.

But then, one fateful night a mysterious computer virus sucks them both into a cursed adventure game! One that will raise your hackles and make your fur stand on end as you and they have never experienced before!

Dragons circle the skies above, a castle is under siege – this virtual world is a very dangerous place to be, indeed. Sandra and Woo must go on an epic quest to seek a way back home, and in the process will find so much more. The game world is full of fantastic and bizarre characters, all of whom have their own agendas, wants and desires. Sandra and Woo will soon find out who exactly is friend or foe. Nothing is as it should be and even less is what it seems. And in the far distance a shadow, rising on the horizon, is threatening to swallow them all.

Help with playtesting by downloading and playing our current alpha demo now from: http://felinefuelledgames.itch.io/the-cursed-adventure
Tell us what you think - feedback of any kind is greatly appreciated and helps the development of the game!

The reason behind the 3D model
47Haven

feline.fuelled  [author] Apr 7, 2017 @ 1:39am
Indeed. The game is ready and we are setting it up for steam at the moment. Right now we are checking the possibility of adding steam achievements and testing the Linux and Mac versions of the game. Thank you, for your patience! :-)

looking forward to play the game :)

Torched Hill  [author] Sep 30, 2015 @ 1:27am
@Rainbow Rider: Yes, we're currently in the process of improving both models and animations.

altair_w Sep 29, 2015 @ 11:50pm
Love the comic, though you should think more about graphic. Let's see Cat goes fishing - even lower graphics, but looks better so far, so its doable :) But waiting with hope :)

IronBeagle Sep 29, 2015 @ 2:21pm
I assume the game art will "change" (at least improve, relative to my tastes) versus what is currently shown?

Sandra and Woo in the Cursed Adventure has been Greenlit and is now listed in the Steam store. For the latest information, purchase options, and discussions for Sandra and Woo in the Cursed Adventure, please see it on the Steam Store or in the Steam Community.
Visit Store Page
For more details Visit Community Hub
For latest discussions
If you really, really want to, you can continue to the Greenlight page. Information on this page may be out of date, since all the action has moved to the areas noted above.