Greenlight > Games > Flaming Firefly's Workshop
Greenlight is being retired. For more information on how to submit games to steam, refer to this blog post.
This item has been removed from the community because it violates Steam Community & Content Guidelines. It is only visible to you. If you believe your item has been removed by mistake, please contact Steam Support.
This item is incompatible with Greenlight. Please see the instructions page for reasons why this item might not work within Greenlight.
Current visibility: Hidden
This item will only be visible to you, admins, and anyone marked as a creator.
Current visibility: Friends-only
This item will only be visible in searches to you, your friends, and admins.
Treasure of a blizzard
Description Discussions0 Announcements3 Comments67 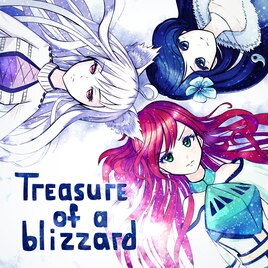 Lesja-gonchar
Offline
See all 26 collections (some may be hidden)

View Treasure of a blizzard in the store

A few scenes added in the screenshots (3 scene).

Read More
Development of the game is close to completion. Release date August 2016
May 3, 2016 - Flaming Firefly

We have created new sprites and backgrounds. Example of our final game graphics ;)

Read More
Description
Release date: Early Autumn 2016
"Treasure of blizzard" is a fantasy themed visual novel inspiring with beautiful arts and interesting game characters. The fate of the protagonist completely depends on your choice. Probably your character may meet his partner in life; however he may also meet the end of his life. You’re the ones to choose.

The young officer is transferred to the capital where he is supposed to be under 24/7 control of the Emperor’s people as a sign of loyalty towards his mutinous father. It’s ironic that the young officer is convoyed by his Childhood friend, Lin. Now she’s serving as one of the Emperor’s guardian and each mission will be valuable for her career. However first, these two have to get over the Mountain Pass and here is a rumor stating the mystical things happen in that place.

• Lin
She is a childhood friend of the protagonist who is convoying him to the capital city. She is afraid of ghosts. She loves money very much. Her family is one of the main authorities of the Empire. Her mother is originally from the Western realms. Lin inherited her color of the hair because of her mother’s origins. And Lin was bullied because of that color. She joined the guardians after Kang had joined the border troops.

• Mei
She is a tavern-lady who runs a guesthouse in the wilderness of the mountains. Kang sees a blue flower on her head and nobody else sees that flower. Sometimes, when she gets angry her eyes began shining. She loves gamble-games, and, most of all, she is mad about the game that was explained to her by some guest who was passing by that place.

• Shan
She is the leader of the werewolves and she is a cold white she-wolf. There are rumors about her people that spread among the humans. Most of the rumor is filled with fear but nobody knows anything for sure.

• Kang
His mother passed away when he was quite little. So he has vague memories about her. Kang used to play with Lin during the days of their childhood. When he was saved from the witch by a swordsman, Kang decided to be a warrior. However Kang was escorted to the capital because the Emperor was in rage so that the ruler could threaten to Kang’s father.

He loves drinking. He often crosses the line drinking really too much.
There is a pendant on his neck that was presented by his mother.


Pre-orders are currently open and we have a demo available(old style) here -
{LINK REMOVED}http://irich5.itch.io/treasure-of-a-blizzard
Everyone who preorders will get a Steam key if Treasure of a blizzard makes it through!
< >
67 Comments

[MLG] BenisBoy Feb 11, 2016 @ 3:00pm
didn't get me that game and just from the looks at it: you gotta capitalize more on the waifu wars m8 (with mate i mean the game creator). 3 characters are not enough.

It IS hard to come up with good extra characters but in the worst case you can just play D&D with a female characters only restriction and get you some nice characters.

Treasure of a blizzard has been Greenlit and is now listed in the Steam store. For the latest information, purchase options, and discussions for Treasure of a blizzard, please see it on the Steam Store or in the Steam Community.
Visit Store Page
For more details Visit Community Hub
For latest discussions
If you really, really want to, you can continue to the Greenlight page. Information on this page may be out of date, since all the action has moved to the areas noted above.