Greenlight > Games > marian.cerman's Workshop
Greenlight is being retired. For more information on how to submit games to steam, refer to this blog post.
This item has been removed from the community because it violates Steam Community & Content Guidelines. It is only visible to you. If you believe your item has been removed by mistake, please contact Steam Support.
This item is incompatible with Greenlight. Please see the instructions page for reasons why this item might not work within Greenlight.
Current visibility: Hidden
This item will only be visible to you, admins, and anyone marked as a creator.
Current visibility: Friends-only
This item will only be visible in searches to you, your friends, and admins.
A Little Less Desperation
Description Discussions0 Announcements3 Comments36 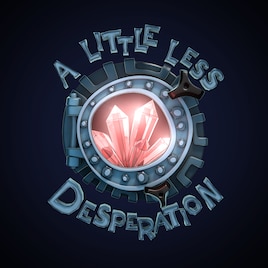 marian.cerman
Offline
See all 8 collections (some may be hidden)
Recent Announcements View All (3)
A Little Less Desperation - Support us on Kickstarter!
November 5, 2016 - marian.cerman

Please visit our Kickstarter Campaign and consider supporting us!
https://www.kickstarter.com/projects/576775592/a-little-less-desperation-a-point-and-click-advent
Every little bit of support helps! Share this with your friends!

Read More
Description
You know how it is, you take a walk in the forest in the middle of the night, next moment you get abducted by aliens.

A Little Less Desperation is an epic space adventure point & click game, full of interstellar journeys, zany characters, a mighty robot villain, an alien beauty of epic proportions [well to certain other species at least] & last, but not least: a bold & courageous hero willing to sacrifice all, to save the universe! Unfortunately nobody applied for the role of the hero... Just when we were about to scrap the project, we met Jacob. Actually he more sort of ambled in off the street to sell us some of his homegrown organic vegetables. He didn't stand a chance against our smooth talking agents & we soon talked him into taking on the role of the space hero. I guess we have since had to stretch the meaning of space hero a bit in Jacob' case but in the end, he didn't screw up as badly as we thought he would.

A Little Less Desperation is a classic point & click adventure game with a marvelous and often absurd story. One that comes complete with mind melting puzzles [yet to be confirmed], whimsical characters and oft-hilarious dialog and observation. Don't worry there's not a sliding puzzle in sight; well not yet, anyway…

Jacob is alone in the woods on a trip to self-discovery, as a UFO crashes. The little alien pilot makes friends with Jacob, who decides to help the visitor with his dilemma. As the UFO has been destroyed, they repair the damaged interstellar emergency call transmitter and summon help. As a big ship appears, it turns out to be a bounty huntress who carries off both Jacob and the little alien into the depths of space.

For Jacob this is the beginning of an odyssey across the galaxy. Slowly it becomes clear how profound the story is Jacob blundered into. He comes into the firing line of a mighty and evil robot whose vicious plans are endangered by Jacob. A funny story evolves with odd situations and surprising twists. At the end Jacob discovers that his potential was a lot bigger than he could imagine.

We don’t intend to reinvent the genre of adventure games with „A Little Less Desperation“, we just want to tell a really good story in the manner of the famous classics. We want to challenge the player with elaborate puzzles and make him laugh with hilarious cutscenes. The adventure is completely illustrated with amazing background images, has a superb soundtrack and contains many crazy ideas!

„A Little Less Desperation“ is not supposed to be a sterile industrial product designed to meet the taste of the majority. No, we are independent and we can make the game as wacky as we want to! And we do have loads of wacky ideas! Look forward to an odd game with the cranky feel of real handicraft!

- Full HD Resolution
- 5 to 7 hours of gameplay
- 60 to 75 Scenes
- more than 20 characters in 2D Comic Look
- for Windows and Mac OS (Android and iOS a possibility)
- classic Gameplay in modern look, no moving puzzles
- great Soundtrack
- English and German Voiceovers

So what's the current state? We're working on the Demo which will be released pretty soon.
Also, about 90% - 95% of the artwork for chapter one is finished! Yay! BUT: Creating an
adventure game is quite a lot more work than one might imagine. It's soooooo time consuming
and exhausting! We need your support to reach our goal! Please help us to spread the word
and please help us to greenlight this great game! Stay tuned, since there will be more news soon!

kurtyb Jan 21, 2017 @ 9:28pm
This looks like a great game - nice artwork and attention to detail plus humorous gameplay.

Nostradamus Jan 9, 2017 @ 3:07pm
2 of those screenshots look almost straight out of full throttle i like it cant wait to try this game

marian.cerman  [author] Jul 23, 2015 @ 3:01pm
Hi, we at Deaf Bird Entertainment are REALLY HAPPY to get so much positive feedback! Stay tuned for more news, there will be a minor update in the next few days. We are busy preparing a small "making of" movie about our artwork. Cheers!

Jasmarin Jul 20, 2015 @ 8:59pm
I wasn't sure wether to vote for this game or not untill the protagonist set his own beard ablaze. At that point it became clear to me that yes, I would buy this game if it was on Steam. Because it's wacky, because it's funny but also because it's a Point and Click (not usually my style of game) with a unique idea. And because I enjoy the lovely art style. I really hope I'll be able to purchase this awesome adventure here on steam in the future. All the best to you!