Greenlight > Games > VoxelStorm's Workshop
Greenlight is being retired. For more information on how to submit games to steam, refer to this blog post.
This item has been removed from the community because it violates Steam Community & Content Guidelines. It is only visible to you. If you believe your item has been removed by mistake, please contact Steam Support.
This item is incompatible with Greenlight. Please see the instructions page for reasons why this item might not work within Greenlight.
Current visibility: Hidden
This item will only be visible to you, admins, and anyone marked as a creator.
Current visibility: Friends-only
This item will only be visible in searches to you, your friends, and admins.
sphereFACE
Description Discussions0 Announcements1 Comments37 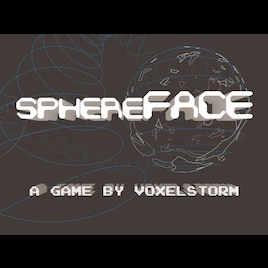 VoxelStorm
Offline
See all 3 collections (some may be hidden)
Kickstarter

View sphereFACE in the store

Just a quick update - the sphereFACE Kickstarter is fully funded, and we're making our way through the stretch goals!

It has less than a day to go, so this is your last chance to become a beta tester and try the game out before it gets released on steam - check it out:
https://www.kickstarter.com/projects/voxelstorm/sphereface

Read More
Description
Release date: Autumn 2015
sphereFACE is a retro-3D vector shooter inspired by Asteroids, wrapped around the inside of a sphere.

gamePLAY
You can look freely around each sphere using mouselook, or your controller, or your keyboard, or even in virtual reality using your Oculus Rift.

Success depends on mastering spherical flight dynamics in what is effectively curved 2D space - easy to pick up, but difficult to master! Are you up to the challenge?

asterROIDS
Asteroids break apart "realistically" along fracture lines, forming shards and boulders when hit. The result of an impact on an asteroid depends on your choice of weapon, the angle and speed. However, you have to plan your demolition carefully to avoid flying debris - just one hit can kill.

sphereSPACE
Of course there's much more than just asteroids! Destroy the obstacles in each sphere to unlock the portals leading out of it, and navigate through a procedurally generated 3D maze of tunnels and spheres.

weaPONS
Pick up and unlock a variety of cool and quirky weapons. Each has its own strategy and learning curve, but the true sphereFACE master must learn to use them in concert with each other. Below are a few of the unique weapons you might find out in the asteroid fields:
There will be many more weapons and powerups in the finished game, but we wouldn't want to spoil the surprise just yet!

upGRADES
Every weapon can be upgraded progressively to alter its effects, improve its performance and bring it to the next level. Choose your favourite weapon to upgrade, but be careful - the upgrade pods are fragile. If you're too trigger-happy, you might destroy them before you can collect them!

And sometimes it seems as if it's almost like they don't want to be picked up...

eneMIES
What, you didn't think you'd just be shooting at passive rocks your entire career? Stray too deep into the hyperspace tunnel network and you might meet something that shoots back... but we don't want to spoil the plot for you!

soundTRACK
The game features entirely original music by four awesome professional musicians - HODSON, Waveland, DorianSRed and Skin Walker. Each sphere has its own music track, and all audio is 3D positional with real speed-of-sound delay, doppler and realistic head shadow, which is made possible by our unique built-from-scratch HDR sound engine. A lot of effort is focused on sound design.

You can hear a preview of the soundtrack, streamed on our bandcamp: https://voxelstorm.bandcamp.com/album/sphereface-demo-ost

techNICAL
We don't use off-the-shelf engines, such as Unity, for any of our games - we write our own each time from scratch, which gives us the versatility to create exactly the gameplay experience we want with no limitations. It also means our graphics engines are highly optimised and run smoothly - even on that old netbook! The engine for sphereFACE is completely custom, built on OpenGL.

We develop and test simultaneously on Windows, Linux and OS X - everything we make is always truly cross-platform, just on principle. We're also committed to using open source tools, and we use GCC, MinGW-W64 and Code::Blocks IDE to build our software.

We also love VR, and sphereFACE alpha is already playable perfectly with the Oculus Rift.

developMENT
The basic game engine and gameplay are already working well, and extensively tested - we've showed off the Oculus Rift version of the alpha build at several gaming exhibitions already. Now we'd like to take this game to the next stage and evolve it into a really fun gameplay experience.

We plan to add many more weapons, and a progression enabling you to collect them. We want to add procedural world layout, in a roguelike style, so no two games will be the same. We'll be adding a lot of unique and interesting enemies, as well as static obstacles and other interesting space junk - and we want to make sure the gameplay is absolutely perfectly balanced. Finally, we have a dark and twisted story progression in mind, where after a while it turns out that you may after all be... ah, but that would be telling! Suffice to say, not all is as it seems...
< >
37 Comments

Raise Nov 18, 2015 @ 4:13pm
Tried it tonight at GamesAreForEveryone vol. 3 and had lots of fun, one of best games presented.
The perfect compromise between retro-gaming and actual arcade/rogue-like genres other than a HUGE revamp of the game Asteroid!

sphereFACE has been Greenlit and is now listed in the Steam store. For the latest information, purchase options, and discussions for sphereFACE, please see it on the Steam Store or in the Steam Community.
Visit Store Page
For more details Visit Community Hub
For latest discussions
If you really, really want to, you can continue to the Greenlight page. Information on this page may be out of date, since all the action has moved to the areas noted above.