Greenlight > Games > Dave's Workshop
Greenlight is being retired. For more information on how to submit games to steam, refer to this blog post.
This item has been removed from the community because it violates Steam Community & Content Guidelines. It is only visible to you. If you believe your item has been removed by mistake, please contact Steam Support.
This item is incompatible with Greenlight. Please see the instructions page for reasons why this item might not work within Greenlight.
Current visibility: Hidden
This item will only be visible to you, admins, and anyone marked as a creator.
Current visibility: Friends-only
This item will only be visible in searches to you, your friends, and admins.
Worlds of Chaos : Corruption
Description Discussions0 Comments70 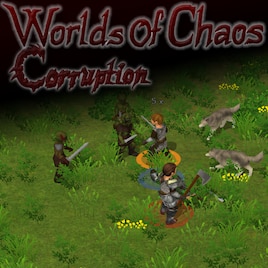 Dave
Offline
See all 10 collections (some may be hidden)

View Worlds of Chaos : Corruption in the store

Store page
Description
Worlds of Chaos : Corruption is a single player, party based open-world action RPG with a strong emphasis on exploration and tactical combats. It has a deep combat system that will challenge you to your limits, and will make clever decisions count. If you wish to play in a more casual way, you can also lower the difficulty levels and still have fun, fast and intense gameplay.

You build a party of 5 characters that are exactly what you want : no classes or choice restrictions. Creating good and balanced characters with the right stats, skills, equipments, items and spells combinations is what matters the most. In this game, a huge importance has been put on making every choice equal in power. What is important for a good party is not choosing the best skills, but an efficient combination of choices that work well together.

Battles are fast-paced, and you will need to take a lot of fast decisions, each of which will help you overcome the difficult foes that you encounter. Choosing which spell to use, when and how to use them, and the positionning of your warriors and choosing the right targets are what will bring you victory.

Worlds of Chaos : Corruption has been Greenlit and is now listed in the Steam store. For the latest information, purchase options, and discussions for Worlds of Chaos : Corruption, please see it on the Steam Store or in the Steam Community.
Visit Store Page
For more details Visit Community Hub
For latest discussions
If you really, really want to, you can continue to the Greenlight page. Information on this page may be out of date, since all the action has moved to the areas noted above.