Greenlight > Games > Largemann's Workshop
Greenlight is being retired. For more information on how to submit games to steam, refer to this blog post.
This item has been removed from the community because it violates Steam Community & Content Guidelines. It is only visible to you. If you believe your item has been removed by mistake, please contact Steam Support.
This item is incompatible with Greenlight. Please see the instructions page for reasons why this item might not work within Greenlight.
Current visibility: Hidden
This item will only be visible to you, admins, and anyone marked as a creator.
Current visibility: Friends-only
This item will only be visible in searches to you, your friends, and admins.
BAZAAR
Description Discussions0 Announcements3 Comments62 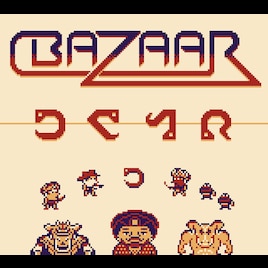 homskillet
Offline
See all 5 collections (some may be hidden)
Recent Announcements View All (3)
BAZAAR is greenlit!
October 14, 2015 - Largemann

BAZAAR has been greenlit! A grand thank you to everyone for your votes and support. We will now be working as hard as we can to finish the game to release before the end of 2015.

If you are interested in following the development, we can be found on Twitter (@LargemannLC, @HomskilletLC, @BazaarGame), Facebook[www.facebook.com], and we have also been streaming our development occasionally on Twitch[twitch.tv].

Stay tuned for updates, we have plans for a multiplayer demo in the coming weeks!

Many thanks to everyone who has voted and helped us spread the word, we are at 62% to top 100 in three days! We have been preparing some development blog write-ups about our engine's features and the future of the game for those who are interested. We'll have those up in the next few days, meanwhile you can like us on Facebook[facebook.com] to tell your friends about your refined taste in video games, and follow us on Twitter where we post the tasty GIFs you crave.

Thanks again for your support!

Bazaar is an Arcade-Adventure with a blend of retro arcade gameplay, classic adventure game atmosphere, and procedural generation to maximize replayability.

The game is currently approaching completion, and we expect to finish development in early Q4 2015. The team is currently working together full time to bring the game to release. The core engine is generally complete, and we are now focusing mostly on content creation, gameplay balance, and visual polish.

We have intentionally been vague in our descriptions, screenshots, and videos to not spoil the fun and mystery we hope to provide when the game is experienced for yourself. We would love to hear your feedback on what you see here, but rest assured that we will have a deep arsenal of new features upon release. We are also interested in integrating Steamworks features like achievements if the game passes through Greenlight.

Bazaar is developed by Largecomm[largecomm.net], an independent development team founded in 2012 and based in Seattle, WA. Since teaming up, we have been developing a custom C# engine that allows us to build precise and responsive 2D games.

Our goal when making Bazaar was to create an authentic interpretation of a retro game, while maintaining careful design standards to make the game work as a modern release. We have also been using the unique low resolution of the game to fine tune our custom engine.

By supporting the release of Bazaar, you would be helping us to continue development on future games that would allow us to push our custom engine even further.

so many thanks to you and everyone who voted and supported us! we've been making huge steps towards finishing, and i'm hearing things about a multiplayer demo soon...

minimurgle Oct 6, 2015 @ 6:24am
Congrats on making me feel like I picked up my game boy. That's actually really cool.