Greenlight > Games > Alex Rose Games's Workshop
Greenlight is being retired. For more information on how to submit games to steam, refer to this blog post.
This item has been removed from the community because it violates Steam Community & Content Guidelines. It is only visible to you. If you believe your item has been removed by mistake, please contact Steam Support.
This item is incompatible with Greenlight. Please see the instructions page for reasons why this item might not work within Greenlight.
Current visibility: Hidden
This item will only be visible to you, admins, and anyone marked as a creator.
Current visibility: Friends-only
This item will only be visible in searches to you, your friends, and admins.
Super Rude Bear Resurrection
Description Discussions4 Announcements4 Comments204

Store page
Recent Announcements View All (4)
SUPER RUDE BEAR RESURRECTION IS OUT ON STEAM YO!
May 5, 2017 - Alex Rose Games

Fam what are you waiting for?! It's heeeere!

The game is announced with a new trailer! Steam page is up here!

Go add to your wishlist if you want it on May the 5th!

Read More
Description
Release date: Q1 2016
If you want to keep up with the game updates, remember you can click "Follow"! 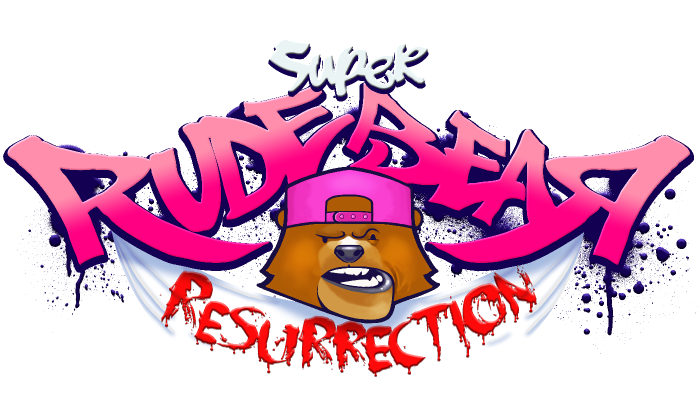 Super Rude Bear Resurrection is a masocore platformer where dying helps. Whenever you die, you leave a permanent corpse behind that you can use as a meatshield, platform, paperweight etc. to get further - though if you're good enough you never have to die at all. SRBR caters to speedrunners, but even a novice can beat it with enough corpses.

We're confirmed for PS4, PSVita and Xbox One and now we're going through Greenlight to get on Steam!

Rude Bear is a gangster bear from East London who’s summoned back in time to medieval England by his mortal nemesis, The Wizard, and forced to overcome challenges that are so lethal he’ll (probably) need to be resurrected hundreds of times to stand any chance of getting out.

There's about 60 tracks in the game right now, ranging from the song in the trailer to hard grime. Here's a boss track to have a listen to:

This game is fun, and challenging.
Mutated Plush
< >
204 Comments

haha I can't wait to play it

We're about to launch the steam page and announce a release date.

Super Rude Bear Resurrection has been Greenlit and is now listed in the Steam store. For the latest information, purchase options, and discussions for Super Rude Bear Resurrection, please see it on the Steam Store or in the Steam Community.
Visit Store Page
For more details Visit Community Hub
For latest discussions
If you really, really want to, you can continue to the Greenlight page. Information on this page may be out of date, since all the action has moved to the areas noted above.