Greenlight > Games > DEVGRU-P's Workshop
Greenlight is being retired. For more information on how to submit games to steam, refer to this blog post.
This item has been removed from the community because it violates Steam Community & Content Guidelines. It is only visible to you. If you believe your item has been removed by mistake, please contact Steam Support.
This item is incompatible with Greenlight. Please see the instructions page for reasons why this item might not work within Greenlight.
Current visibility: Hidden
This item will only be visible to you, admins, and anyone marked as a creator.
Current visibility: Friends-only
This item will only be visible in searches to you, your friends, and admins.
Panzermadels: Tank Dating Simulator
Description Discussions8 Announcements11 Comments320 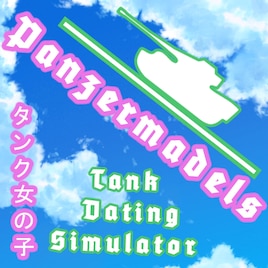 Panzermadels: Tank Dating Simulator has now entered the beta stage, and Kickstarter/Patreon backers have received their codes for access to the game!

It's not to late for you to get in on the, ammo rack, laden fun! Back us on Patreon now to join in, and you too can support anime tank girls!

STORY
Erwin Lemmor just got transferred to a prestigious military academy to study Armored Warfare. But when he arrives, Erwin realizes it's not Tank School, but "Tank School" for World War II Tanks. Who happen to look just like Japanese School Girls...!

Instead of studying military history and doctrine, he's in "Basic Artillery Computations for Fire Support 101", and "Radio Operations 214". Will he win the heart of the tank-girls, or end up as cannon fodder? Only you can decide in, "Panzermadels: Tank Dating Simulator".

DETAILS
Panzermadels is made by 'DEVGRU-P' a small team of American developers in the style of a traditional Japanese Visual Novel. Unabashedly goofy, the game takes every trope you know from visual novels, and puts a distinctly Tank-Related twist on them! With six different romance plot-lines and a multiple of endings based on your choices, Panzermadels will keep you entertained for a number of playthroughs!

Exsu Feb 24, 2016 @ 3:34am
No no no. You can´t create visual novel just by making generic character models and just change names to mean something and drop bits of somewhat historic moments and lines here and there. And call it visual novel about tanks later. Just NO.

Vulpestus Feb 19, 2016 @ 7:04am
"World War II Main Battle Tanks." Dear author, the MBT type of tank came in the late cold war, the fact that you say World War II Main Battle Tanks is appauling, and you need a bit of a history lesson. With love - Tails. P.S. TRY FUCKING RESEARCHING THINGS! I WOULD NOT BE SAYIN THIS IF YOU HAD JUST SAID WORLD WAR TWO TANKS, BUT NOOOOOOOOOO YOU HAD TO SAY WORLD WAR TWO MAIN BATTLE TANKS! WHAT KIND OF IDIOT ARE YOU?! P.P.S. Sorry for the bit of anger, I just take historical accuracy to a high standard.

Panzermadels: Tank Dating Simulator has been Greenlit and is now listed in the Steam store. For the latest information, purchase options, and discussions for Panzermadels: Tank Dating Simulator, please see it on the Steam Store or in the Steam Community.
Visit Store Page
For more details Visit Community Hub
For latest discussions
If you really, really want to, you can continue to the Greenlight page. Information on this page may be out of date, since all the action has moved to the areas noted above.