Greenlight > Games > jogaloca.com's Workshop
Greenlight is being retired. For more information on how to submit games to steam, refer to this blog post.
This item has been removed from the community because it violates Steam Community & Content Guidelines. It is only visible to you. If you believe your item has been removed by mistake, please contact Steam Support.
This item is incompatible with Greenlight. Please see the instructions page for reasons why this item might not work within Greenlight.
Current visibility: Hidden
This item will only be visible to you, admins, and anyone marked as a creator.
Current visibility: Friends-only
This item will only be visible in searches to you, your friends, and admins.
SyncLoop
Description Discussions1 Comments110 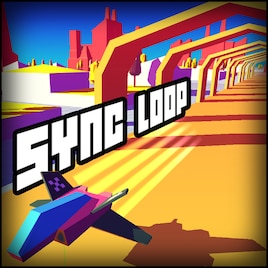 jogaloca.com
Online
See all 8 collections (some may be hidden)
Description
Release date: Troisième trimestre 2015
SyncLoop : a fast-paced minimalist racing game which plays on your nerves

History
Year 2150. Earth has been on its decline for many decades. Profit race leaded to mass pollution, overproduction worsened the widening gap between the rich and the poor countries, egos and misplaced patriotism leaded to wars... It is now a common knowledge that Earth is a ticking bomb, a home about to be lost.

In desperation, Humanity invested in spatial research. Its only hope was finding a new planet to colonize. One has been found. Called New Earth, this planet is now the only way out, for a declining civilization. But interstellar journeys have a cost. Therefore, it is impossible taking all the populations to this planet. Governments gathered, and agreed on this : each State, each country would send its greatest minds, those able to start a new civilization there. Scientists, engineers, soldiers, those are the privileged ones. As expected, such a decision was extremely contested, and could have become a source of conflicts and hatred.

In order to contain protests, violence and mass histeria, governments united and decided to launch a program. Called SyncLoop, it is a new racing sport, now extremely popular, and broadcasted everywhere. Football and every former popular sports dont exist anymore : just SyncLoop remains.
Like gladiators of modern times, those who join SyncLoop play with their life. Like gladiators, they are idolized heroes. Like gladiators, their only ending is death… But the reward is priceless : a ticket to New Earth for their family.
Each month tournaments are organized. Each month the masses gather to watch these exciting bloody races. And each month a pilot resists longer than the other before crashing, therefore wins the tournament, and his family gets to be part of the journey to New Earth.

In a collapsing world, only one motto remains : “bread and circuses”. SyncLoop is the last hope for a desperate population, and you are gonna be part of it. Be a hero, Earth is watching you...

Racing. Arcade. Skills
SyncLoop is many things at the same time. SyncLoop is a breathtaking 3D arcade game. SyncLoop is also a very challenging old-school experience. But, above all, SyncLoop is a unique and extremely pleasing universe. Colourful, aesthetically appealing and futuristic : this is SyncLoop !

Develop your skills, as your ship goes faster and faster after each lap. Make the biggest score you can. Show how talented you are !

The game provides a pleasant arcade scoring experience, served by a nice and heady soundtrack.

Fun, worth being played with friends, SyncLoop is an addictive arcade game which guarantees a fun game experience.
Easy to handle, hard to master and perfect for competition. Do you think you’re skilled enough for SyncLoop ?

Features
Challenge your skills
SyncLoop is all about scoring. Like old fashioned arcade games, this game will test your skills and limits. Although it’s easy to handle at first, scoring may require some training and many retries. As your ship accelerates after every lap, you will need a lot of reflexes. Staying focused will definitely be the key to success !

More than 40 unique levels
In SyncLoop, there is no way you can get bored. These levels provide an entertaining and diversified game experience. Each game throws you in a futuristic world, in which each bend can become a challenge. Isn’t it exciting ?

Two Game Modes
In the main Game Mode you will be challenged by our 40 hand-designed levels. Discover and complete them all... This is just your first step in what SyncLoop really is !
Cause then comes the Infinite Mode. In this one, the pace is randomly generated. Harder, better, faster, stronger : this is what Infinite Mode is about ! If you like challenges, then you’re at the right place !

An amazing soundtrack
SyncLoop’s soundtrack is part of this unique game experience. Inspired by electronic music and arcade’s sound aesthetic, the game provides a punchy music which makes this game even cooler !

Jaw-dropping graphics
Who said a game needed full HD graphics to be beautiful ? Surely not us ! Realism and simulation are not always the key, and SyncLoop is a good proof of that. Colorful, and with a nice 3D futuristic world, SyncLoop has a unique style which wont leave you indifferent !

Challenge your friends !
Since it’s all about scoring, what about defying your friends ? Isn’t it cooler sharing it with them ? With the points counter on the top of your screen, it’s easy seing who’s the best. But be careful, don’t crush them too much, they might not be your buddies anymore, after few defeats !